My voyage to the Newport Folk Festival began before dawn on Saturday and included a brief (and accidental) detour to New London, CT. … Continue reading 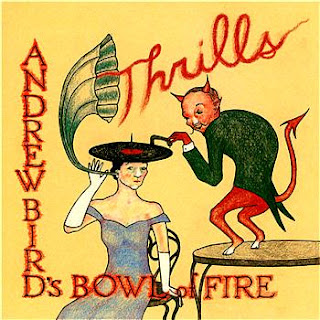 I’ll admit it: I like Andrew Bird himself and find his creativity and talent inspiring, but I’ve had a hard time getting into Andrew Bird’s music. When I tried to just listen to him, I found myself liking “Imitosis”, “Heretics”… and that was about it. When I actually watched him play, by way of videos of live performances, I fell in love with a few more songs, like “Anonanimal” and the marvellously ungainly-titled “A Nervous Tic Motion of the Head to the Left”. While all the songs weren’t clicking with me, the ones that did click, clicked hard.

I previewed samples from a few of his albums and just wasn’t finding a whole album I felt like dropping a dime on… until I hit those first two Bowl of Fire albums – Thrills and Oh! The Grandeur – then it was Hot, damn! (On the third and final Bowl of Fire album, The Swimming Hour, switched gears, delving into a variety of pop styles. Bird refers to it as his “jukebox album”. ) If, like me just a week or so ago, … Continue reading