A Good Read, a Good Listen, and a Good Drink: Murder by Death 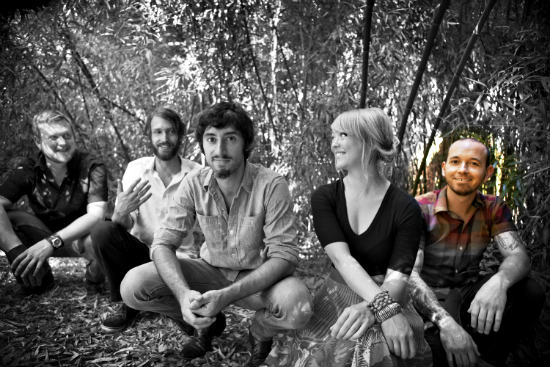 Murder by Death’s latest album, Bitter Drink, Bitter Moon, is a product of one of the most successful Kickstarter music campaigns to date, and the endearingly silly video for the campaign helpfully categorizes the band’s sound as “dark whiskey devil music”. But before you go off thinking this is another cheesed-up act pining for a time that never was, littering their lyrics with talk of crossroads and rotgut and deals with the devil, know that the music of Murder by Death is much more complex and elegant than that.

And on Bitter Drink, Bitter Moon, Murder by Death have once again stood at the crash site of Americana and indie rock and swept the debris into a new, cohesive whole, honing the finished product into a rich, captivating journey through stories gritty and haunting. Lost girls, boozy wakes, rambling death, and fated (and perhaps fatal) romance, fill the 13 tracks, picking you up where you stand and setting you down somewhere very different, somewhere misty and full of shadows.

In anticipation of their upcoming appearance at the Grog Shop in Cleveland (February 22, co-headlining with Man Man), Murder by Death drummer Dagan Thogerson (who went so far as to offer his skin as canvas to a flush contributor in the aforementioned Kickstarter campaign) shares with us some space-centric recommendations.

Good Read: John Carter of Mars by Edgar Rice Burroughs
I really got in to reading science fiction about three years ago. I’d never heard of the John Carter stories until Disney made a movie out of them that I heard was bad. A friend lent me the first volume containing three novels and I ripped right through all 900 pages. The stories were published in the early 1900’s, so the actual science is all weird and wrong, lending more charm to an already charming lead character. John Carter is a Virginia fighting man who is the noblest of all. When he unintentionally teleports to Mars (what?), he quickly fights his way to fame and glory, falls in love, and unites all of the planet’s races of Martians. All the while refusing to compromise his strict gentleman’s sensibilities. All of the ingredients of the story add up to something that is at once super cool and totally ridiculous, which is sort of the reason that I love sci-fi in the first place.

Good Listen: “Another Space Song” by Failure
My band mates give me shit for my love of nineties music, but I stand by this tune. It’s a song that I can get lost in. The drum beat is really cool and never changes for the entire four plus minutes of the song, and lyrics are a beautiful profession of the singer’s romantic love of space. It’s just a beautiful song.

Good Drink: Manhattan on the rocks
Dash of bitters, tiny bit of sweet vermouth, and two ounces (at least) of bourbon. Splash of water, swirl it, don’t shake.