Home » shows » Murder by Death Is Coming to Cleveland

Murder by Death Is Coming to Cleveland 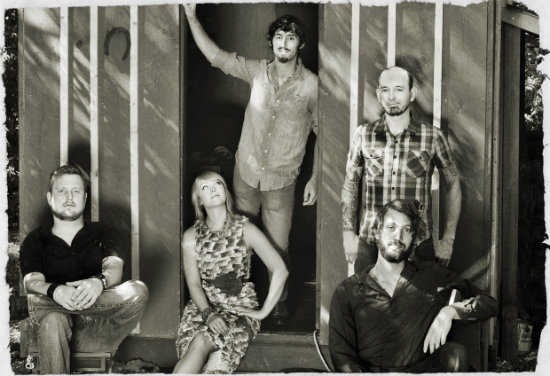 The best voices in modern music are not those that are technically proficient but those that are dented and torn, so full of character that they could tell a whole story just by humming a few notes. Tom Waits, Billie Holiday, Ray Charles, Leonard Cohen… as their careers continued their lives seeped into their voices, expanding, contracting, cracking, causing deep crevices. Adam Turla of Murder by Death is well on his way to becoming a member of this camp. In the early days of MbD, Turla’s voice was like a flower bud, green and simple. Now, a decade on, his voice has a timbre closer to another one of those vocal icons, Johnny Cash.

And like those other singular singers, Turla is not relying merely on his battered vocal chords to carry him forward. He integrates it with A) a great band, and B) great stories. While this is clearly a band with a sense of humor – not only are they named after the 1976 murder spoof starring Peter Falk, Peter Sellers, Maggie Smith, and more, but titles in their catalogue include “Spring Break 1899”, “Intergalactic Menopause”, and “Killbot 2000” – their strongest suit is balancing this voice, this music, and these stories to create transportive moods. This craft is at its most whole on their latest album – their sixth full-length album and their first for Bloodshot Records – Bitter Drink, Bitter Moon.

Murder by Death will be bringing it all to the Grog Shop in Cleveland on February 22 when they co-headline with the quite different, but also great Man Man. Damion Suomi will open. To get more of a live taste of these exciting bands, check out this Murder by Death concert at NPR and this Man Man performance at Amoeba Music.

Bonus: Enjoy Adam Turla navigating an interview with a couple of kids.