A Good Read, a Good Listen, and a Good Drink: The Payroll Union 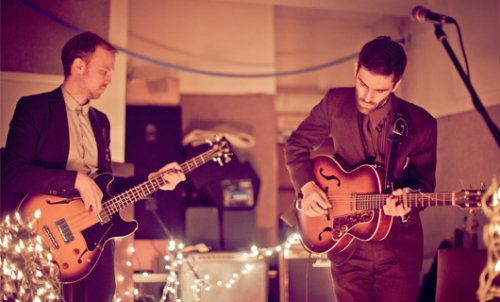 Is it right to describe someone’s voice as “woody”? (Another hurdle: is it possible to do so without calling a particular Monty Python’s Flying Circus sketch to people’s minds?) Because I realize that is what Pete David’s voice makes me think of: a dark, polished wood. Perhaps mahogany or a particularly richly-hued and knotty cherry. It’s pleasing to the senses, but its many rings and swirls have stories tucked into them.

So, too, could be described the music of Pete David’s band, the Payroll Union. I’ve heralded the Payroll Union here before for their instantly-effecting music and the rich history that makes up the bulk of the stories told in their songs, and I’m happily anticipating their first full-length album, slated for release this autumn. The band is offering a free track from their forthcoming album, one new track each month, at their site (click “free song” in the header) through September.

Today, Pete shares a few recommendations with us.

Good Read:
1776 by David McCullough
I’m currently in the middle of The Civil War, Shelby Foote’s epic narrative and though it’s engrossing, he still doesn’t beat David McCullough for bringing history to life. McCullough’s research, his even-handedness and his economy of words all combine to create an incredibly vivid picture. He is able to give such a strong sense of presence to history and show how extraordinary – and in some cases, unlikely – events were. For this reason, I’ve chosen 1776, his book on events of the Revolutionary War during that year. You understand why New York delegates to the Continental Congress were wary of supporting the Declaration of Independence as 30,000 troops gradually sailed towards their city. They would have been hung as traitors, if caught. To give that figure some context, Philadelphia was then the largest city of the thirteen colonies, with a population of around 30,000. The sense of fear and trepidation is brilliantly conveyed by the author. Ultimately, McCullough’s skill is in presenting ‘his’ characters as real people and not just impressive figures. Washington, Howe, Greene, they all emerge with their flaws and strengths painted without – seemingly – any great bias.

Good Listen:
Tonight’s the Night, Neil Young
There’s plenty of good recent music I’m listening to at the moment – Slim Cessna’s Autoclub, Neva Dinova, Waters – but there are only a handful of albums I consistently return to and one I’ve recently put on the player again and have done for the past 11 years, is Neil Young’s Tonight’s The Night. A couple of years ago, I finally got round to getting it on vinyl and it’s given me another burst of enthusiasm for what is probably – if I really had to pick one – my favourite record. To describe it as ragged would be an understatement. The vocals, cracked and drunk, are beautifully broken; guitars crash and tumble; piano keys are clumsily tinkled. It swells around you in a similar way to Exile On Main Street, but Tonight’s The Night is both drunk and sad. This is an album about grief, and the sense that the band are on the edge of falling apart pervades the whole record. I love Neil Young, and he has consistently made great records, but none better than this.

Good Drink:
Timothy Taylor’s Landlord
No doubt about this one. My desert island beer is and always has been Timothy Taylor’s Landlord. Full, hoppy but not overpowering and a perfect 4.3% ABV. Every pint is deeply satisfying. Tastes great from a bottle too, which has, on the label, a lovely picture of a jolly, bald, rotund man (presumably the landlord) grasping firmly a tankard of the foamy beverage. Great beer from one of the many great Yorkshire breweries.

“Jake the Pistol” – The Payroll Union

Tagged  A Good Read a Good Listen and a Good Drink, links, The Payroll Union, video.
Bookmark the permalink.
Logging In...