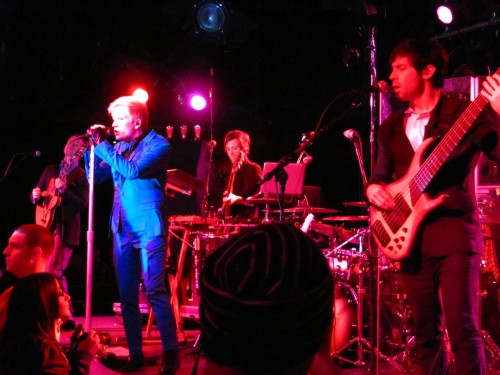 To the left, in the snazzy teal suit: Patrick Stump, formerly of Fall Out Boy. To the right, on the bass, Matthew Rubano, formerly of Taking Back Sunday. Also present are Michael Day on guitar, and Casey Benjamin (HEAVy) on keys and saxophone. (Skoota Warner of Ra is playing drums on the tour, he’s just not in this picture.)

Patrick Stump and friends – technically this is a solo tour for him – were the second of three acts in the show I went to last Friday. The  first opener was Foxy Shazam, the headliner was Panic! at the Disco, and I’ll get to back to them later. First I have to tell you that how Mr. Stump and his merry crew put on a defiant, triumphant, raucous roller-coaster ride of a show. I was actually really surprised at some of the pictures I was able to get, given the way the pit was heaving. The set started with a snippet of Bowie’s “Let’s Dance”, which essentially set the tone from the evening. (We were jammed in too tight to really dance, but there was definitely a great deal of enthusiastic jumping up and down.) The rest of the songs, with the exception of a cover of “In the Air Tonight”, were drawn from Stump’s solo work, including both the Truant Wave EP and the more recent full length  Soul Punk.

His new, post-FOB sound is different than FOB – more synths, less thundering drums – and has soul, funk, and dance-pop elements. The  lyrics with sharp, sharp edges are the same though. For example, on Soul Punk there is Run Dry (X Heart X Fingers) a bouncy up-tempo number that is at least in part about hitting an alcohol-fueled rock bottom, and The “I” in Lie, a soulful meditation on infidelity.

On the other hand, there is also This City, a mostly-sweet pop hymn to both the bright and dark sides of Chicago, Stump’s home town, and Coast (It’s Gonna Get Better) the theme of which is “you may think things are screwed up now, but hang in there, it’s going to get better.” (My favorite, to my own bittersweet bemusement, is Bad Side of 25, because I do actually remember Chernobyl and a time when there were two Germanys.)

Anyway, here are some more pictures from his set: The photopit in front of me suddenly (and briefly) cleared . . . Drum solo! (I promise he’s in there.) Matthew Rubano and the double-bass keytar.

The Panic! tour is winding down now, but Stump will be playing more shows this winter, and if you can catch him, you should. Now, as for the rest of the evening: Foxy Shazam and Panic! at the Disco were as fabulous as ever.  I’ll leave you with a couple of pictures from their set(s): Alex Nauth; sadly, his fabulous furry boots are hidden behind the monitor. Sky White, with Daisy and his bass in the background. Dallon Weekes on the keyboard My attempt at getting both the still-pogoing pit and the band at the same time. I promise there are many many arms waving in that inky darkness on the left. A good whole-band shot, as they were winding down.