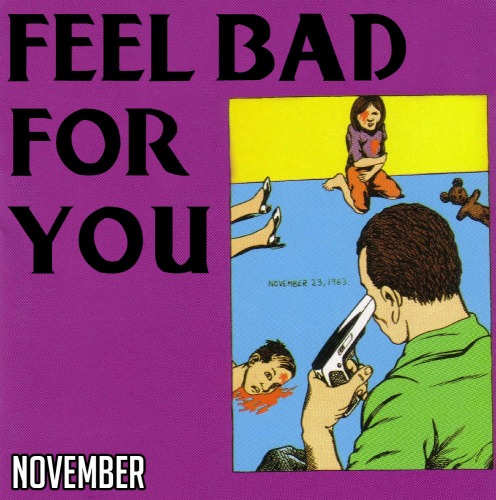 The rabble of bloggers, Twitterers, musicians and miscreants has gathered again to bring you your monthly dose of Feel Bad For You boundary-less musical chaos, which you can stream and/or download below. To make up for last month’s oversight, I’m representing double this month. Thanks, Matt!

Title: Lowdown
Artist: Tom Waits
Album: Orphans: Brawlers, Bawlers & Bastards (2006)
Submitted By: Brad Kelley
Comments: In honor of his first release of new studio material in seven years, Bad As Me, I give you great song from the 3 CD 2006 compilation, Orphans. This rocks.

Title: Ballad of Fuck All
Artist: Malcolm Middleton
Album: Waxing Gibbous (2009)
Submitted By: Gorrck
This song fits my mood these days. Fuck it all. Burn it all down. Meh, there’s a new episode of “Community” I haven’t seen yet.

Title: I Can Tell
Artist: Jo Wymer
Album: Living With Scars(2011)
Submitted By: @popa2unes
Comments: I have to thank bryan at Ninebullets for turning me on to this great lady in my backyard. So I’ll let him say it: ‘She growls, purrs, and isn’t afraid to hit the high notes throughout her hook-laden debut and it’s literally a tour de force of potential hits, songs that are radio-ready, if radio had any soul left. Check out Ninebullets to get another two songs.

Title: Lionhearted
Artist: 4 On The Floor
Album: 4×4 (2011)
Submitted By: toomuchcountry
Comments: I reviewed a new CD by this Minneapolis quartet last spring (http://toomuchcountry.blogspot.com/2011/03/cd-review-4-on-floor.html). While the gimmicks are heavy (4 band members, all songs in 4/4 time, songs involve band members kicking their own bass drum, album name 4×4, etc.), the music is pretty dadgum good. Thought it was worthy of submitting for FBFY.

Title: Outlaw Man
Artist: The Eagles
Album: Desperado (1973)
Submitted By: Bryan Childs (ninebullets.net)
Comments: Deperado, the second studio album by The Eagles, was a concept album loosely based on the infamous Dalton Gang. Anytime people just scoff at the notion the Eagles were ever a good band, I give them this album.

Title: Hold On
Artist: Alabama Shakes
Album: Alabama Shakes EP (2011)
Submitted By: TheOtherBrit
Comments: I’m driving to Alabama in a matter of hours to see this band. I love this EP and not just because this song uses my name. I think you’ll be hearing a lot from these guys (and girl) in the next year.

Title: Fool’s Gold
Artist: The Damn Quails
Album: Down The Hatch (2011)
Submitted By: Trailer
Comments: I’m obsessed with this band at the moment.

Title: Somewhere Else
Artist: Jim Bryson
Album: Live At The First Baptist Church (2008)
Submitted By: Simon
Comments: Great live version of a track that appeared on Bryson’s 2003 album The North Side Benches, for the unacquainted Bryson is a long-time sidekick and collaborator of Kathleen Edwards – who recorded a version of this track on her Back To Me album.

Title: Pray on Me
Artist: Kill It Kid
Album: Feet Fall Heavy (2011)
Submitted By: April @ Now This Sound Is Brave
Comments: Matt from Mudlow turned Rick Saunders on to this band, and Rick, in turn, tapped it into my veins. I was about five songs into this album before I could finally close my gaping jaw. Thundering.

Title: No Happier
Artist: Low Duo
Album: The EP of Fear and Failure (2011)
Submitted By: Slowcoustic
Comments: Something a bit different in it not being just a “guy with an acoustic guitar”, still a bit lo-fi and very UK sounding. Just something that catches my ear now and again.

Title: Oo-Ma-Liddi
Artist: J.J Jackson & The Jackals
Album: The Roots Of The Cramps (2009)
Submitted By: annieTUFF
Comments: I always get mixtape anxiety right before I submit a song, and I really, really, reeeeaaaaalllly couldn’t decide what song to use for this month (its was a fierce internal struggle between Roky Erickson, The Undertones, and Screaming Lord Sutch….). So, instead of going with any of the bands I just mentioned I went for a completely different choice. This song never fails to make me dance like a fool, even while driving….which is dangerous AND I look like an idiot. But dang dudes, just listen to this and try not to shimmy and shake.
Also, I believe the original release of this song was 1959, but the 2009 “Roots of the Cramps” comp is really good, check it out.

Title: Safe
Artist: Danny Barnes
Album: Rocket (2011)
Submitted by: Mando_Lines (Jim Warren)
Comments: Nice track off of Mr. Barnes new record. Not representative of the rest of the record, however, which is mainly rock.

Title: God Damn Job
Artist: The Replacements
Album: Stink (1982)
Submitted By: Rockstar_Aimz
Comments: This song is the story of my life right now. Feel bad for me!

Tagged  download, Feel Bad For You.
Bookmark the permalink.
Logging In...