Home » feature » A Conversation with Pete David of the Payroll Union

A Conversation with Pete David of the Payroll Union 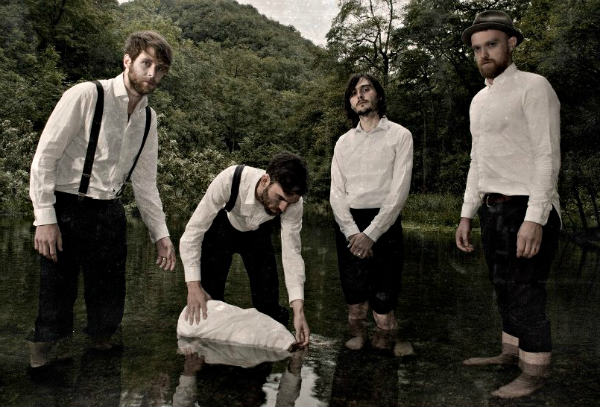 This year has seen them touring the UK, beginning an exciting collaboration with historian Andrew Heath, and, best of all, releasing their first full-length album, The Mule & The Elephant . TM&TE is a more somber outing than previous Payroll Union releases – though more in sound than lyrical content as they continue to focus on the hard and bloody stories of early American history – but it is the most rewarding one so far.

As Dr. Heath expounds upon in the album’s liner notes, “the album is no celebration of the history of the Early American Republic, but rather an eloquent measure of how unevenly the U.S. managed to live up to its democratic promise.” The early years of “the great American Experiment” were rife with ambition, death, and longing. Some of the stories illustrated on TM&TE include the tragic life that lead to the ruthless ambition of Edwin M. Stanton, the campaign for temperance by preacher Charles Grandison Finney, the relationship of Thomas Jefferson to his slave Sally Hemings, and the duel that ended the life of Alexander Hamilton.

The feeling that rises to the top on TM&TE again and again is one of yearning, from the longing for a dead loved one to the wish for a different outcome in a tragic situation to the yearning to be remembered for the good one did despite the precarious balance of the scales of one’s life. Singer Pete David’s voice seems naturally suited to these tales of longing, with its dark and woody timbre, especially at what feels like the emotional crescendo of the album in the double-shot of “The Cawing Cuckoo” and “Mary Lamson”. The more you listen to this album, the more the tendrils of this longing snake into your heart.

Knowing how the mention of early American stories sets him off on passionate tangents, I was very pleased to have Pete answer a few questions for us. Join us as we talk about the Payroll Union’s collaboration with Dr. Andrew Heath, the murder of “the Beautiful Cigar Girl”, exactly why Brits are making songs about early American history, and more.

How does a fine young British gentleman come to be so interested in the history of the treasonous American colonies? And how does he then rope other British gentlemen into making music about said history?

America’s unlikely experiment in democracy is fascinating precisely for that reason: it’s amazing that it happened. I think I gravitated to the Early Republic because I’m almost expecting it to all fall apart at some point. The stories are so rich and varied and the ideas so lofty and patriotic. It’s the paradox which keeps me hooked and that still exists today; the country’s attempt to live up to its promise is so appealing a subject. In terms of the band, I think they find the subjects interesting but it was never in the job description: ‘must be able to display knowledge of 19th Century American history.’

How do you put yourself into the minds of the subjects of your songs? Some of them are such heartbreaking stories, and that feeling comes through in your voice.

Exactly that. Putting myself in their skin is what I try to do. The voice is where I find the character and I don’t know if this comes across entirely but I do try and fit my voice to my subject. “House on the Hill”, the final song on the album, is supposed to be tender and so my voice is very different to, say, “The Anxious Seat”, where I’m attempting to inhabit an authoritative evangelical preacher. I love those little moments, tiny expressions of the voice, where I’m able to imbue the words with the feeling they deserve. I think “Mary Lamson” is probably my most successful attempt at that and mourning is a strange emotion to try and express in song.

Where does “Cawing Cuckoo” come from? The heartache of it is wholly relatable and seems like it could come from any number of painful relationships, modern as well as past.

Cawing Cuckoo is a funny one in that it was inspired by a New York murder in the 1830s. Mary Rogers – the “Beautiful Cigar Girl” as she was known – was found battered in the Hudson River and there were various suspects but no one was ever charged. She worked in a cigar shop and the story got a lot of attentione becasue she attracted a lot of newspapermen, as well writers like Irving, Poe and Cooper. Poe was actually a suspect for a while. I got quite consumed by the case. The story was strung out by the papers and various ‘witnesses’ came forward for their moment in the limelight. I worked on it for some time but then I ended up stripping away a lot of the detail and it soon became quite a simple heartbreak song. The lyric comes from the perspective of the murderer, who in my retelling of it, is the boyfriend who has come to the conclusion that she has been unfaithful to him. He was the character I was drawn to, particularly his weakness and uncertainty. Tragically, he ended up committing suicide. It’s a bitter song and yes, it’s true, it could really be anywhere at any time, especially when I say, ‘there are no pictures of you now.’ I wasn’t particularly thinking of photographs when I wrote that line but I can see how it would fit that interpretation. It’s a song of regret and resentment but I there’s enough sweetness in there to at least pity the protagonist. I suppose I was thinking of the Sun Kil Moon album, Ghosts of the Great Highway, when I wrote that one, particularly Glenn Tipton. Great song, beautiful but brutal.

What is the source of “Imitation of Life”?

Stolen from the film of the same title! It’s a Douglas Sirk melodrama and probably my… hmmm, second favourite film. The main protagonist is a black woman whose daughter is born very light-skinned and can essentially ‘pass’ as white. The daughter runs away to avoid suspicion but her mother tracks her down. In the film, it’s the most wonderfully tender scene and I felt the need to recreate it in song. Seriously, try and watch that film without crying, it is incredible. It’s also pretty radical. Sirk was obsessed with Bretcht and used all the distanciation techniques and reflecting the contradictions of the family unit back onto the audience. Imitation of Life is his masterpiece.

What can you tell us about your project with historian Dr. Andrew Heath?

Well, the project will be broadly focusing on music and history, but then more specifically we’ll be producing an album using a lot Andrew’s research on antebellum Philadelphia. We’ll be creating a website where people can delve a bit more into the subject matter and we’ll be producing a short film looking at the process. We’ll also be staging a number of events throughout the year to open the project up so I’m very excited about the whole thing. Andrew has been a huge inspiration to me and I’m really looking forward to working on something with more defined parameters. Having said that, it’s certainly a bigger challenge for me as a songwriter. The city itself, as an entity, is what I’m trying to get inside. As a band we’ve already begun talking about how we’re going to portray that and it’ll be a very different approach than the first album.

How was the mini-tour? Do you feel like you made a lot of new fans?

The tour was a lot of fun and we were fortunate enough to have great crowds and we played with some fantastic bands. Actually, I’d really recommend a couple of the other bands. Check out Johnny Panic & The Fever based in Liverpool and The Yes Mess in London. Both great. The two London dates at the end were a really good conclusion to the week. Loads of energy at both gigs and we got a chance to meet a lot of new people and yes, hopefully we made a few new fans.

Do your fellow Brits find your obsession with American history odd at all?

I think some people find it a bit strange, but that’s usually a reaction to my ridiculously long introductions to some of the songs when we play live. I can see the quizzical looks on some faces so I’ve tried to reign that in a bit. As opposed to a five minute lecture, I can just tell them in a sentence what it’s about but I get a bit carried away sometimes. I think generally it’s quite a good talking point when I chat to fans and for those who have even just a passing interest in the subject, it’s quite an interesting quirk.