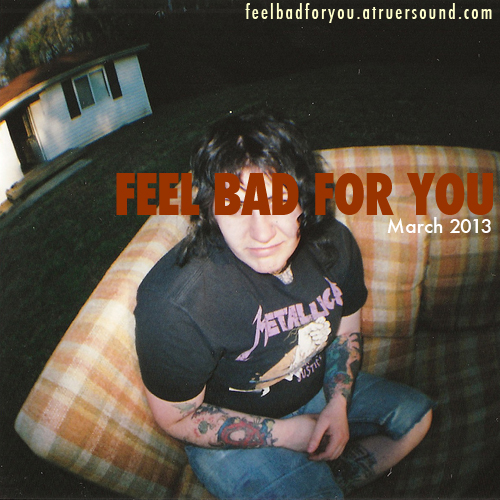 1. Title: Aluga-se-Vende
Artist: Móveis Coloniais de Acaju (translates as “colonial mahogany wood-made furniture”)
Album (year): Idem [2005]
Submitted By: hoosier buddy
Comments: In the song, this couple breaks up and he says things to her about keys and the living room and brokers, all of which may make sense to him. What I love about it is the weird Bill Murray/Oingo Boingo vibe, the complicated but well-orchestrated arrangement, the drumming, and the way the song builds, then chills out a lot, and finally comes back like gangbusters to knock your socks off.

3. Title: This Is A Notice
Artist: Mic Harrison And The High Score
Album (year): Still Wanna Fight
Submitted By: annieTUFF
Comments: Keeping with the CXCW theme I chose Mic Harrison and The High Score. I filmed Mic Harrison and The High Score’s CXCW video last year…in the dirtiest motel in Tennessee. No joke, that place was disgusting. I set my beer down to take some photos and when I went to pick it back up a roach was on the can. That motel is condemned now by the way… Anyway, back to the music, this song is on “Still Wanna Fight” the same album as the song they sang for CXCW last year “The Colonel Is Dead”. Good stuff, check it out.

4. Title: Da Couch Dat Burps
Artist: Da Yoopers
Album (Year): For Diehards Only (1995)
Submitted By: Gorrck
Comments: There’s a fine line between participation and mockery.
[Editor: FOR.THE.WIN! If I were to give awards for monthly contributions, this is the March winner.]

5. Title: Falling Apart
Artist: Billy Pilgrim
Album (year): Bloom (1995)
Submitted By: @philnorman
Comments: Feels like a CXCW song to me, “left me here in these ragged
chairs, stuffing snowing everywhere.” Golly, I loved this band. You
might know Kristian Bush now for being “the guy in the hat in
Sugarland.”

6. Title: Wicker Chair
Artist: Kings Of Leon
Album (Year): Holy Roller Novocaine (2003)
Submitted By: BoogieStudio22
Comments: I love early Kings Of Leon. Their sound was so ‘swampy’, but they had the occasional laid back song and this fits that lazy, laid-back ‘sofa/chair’ theme.

7. Title: Friends in Bottles
Artists: The Takers
Album (year): Taker Easy (2009)
Submitted By: Rockstar Aimz
Comments: This is one of the best songs of the last five years, however, to my knowledge, The Takers as a band no longer exist. Someone please correct me if I am wrong, but I believe that they split in 2010. Devon Stuart, formerly of The Takers, and Michael Claytor played “Narrow Road” for CXCW 2011. At CXCW2012, Chase 56 did a damn good cover of “Friends in Bottles.”

8. Title: When Our Love Passed Out on the Couch
Artist: X
Album: Wild Gift (1981)
Submitted By: @tincanman2010 (http://tincanland.wordpress.com/)
Comments: Was tempted to send in The Couch by Alanis Morris Settee, but X tiCX a heap of CXCW boXes – to wit, crunchy guitars and depraved indifference to polite society. On TGIF, God gave man the couch so that we might spend our days of rest passed out or making out – or, in this case, making out with other girls while yours is passed out.

10. Title: Run Away
Artist: The End Men
Album (year): Play With Your Toys (2013)
Submitted By: Simon
Comments: One of my favourite 2012 CXCW performances came from the The End Men, here’s a slice of primal rock n roll taken from their current album Play With your Toys available at http://theendmen.bandcamp.com

11. Title: Chimayo
Artist: Will Kimbrough
Album (Year): This (2000)
Submitted by: erschen
Comments: This guy has collaborated with people like Todd Snider, Jayhawks, Matthew Ryan and Guy Clark but is an great musician on his own.

12. Title: No Honey for Anybody
Artist: The Bear
Album (year): The Bear (2011)
Submitted By: TheOtherBrit
Comments: Never would’ve heard of the crew out of North Alabama if it weren’t for CXCW. Looking forward to their video this year!

13. Title: Italian Leather Sofa
Artist: Cake
Album (Year): Fashion Nugget (1996)
Submitted By: BoogieStudio22
Comments: Who doesn’t like Cake? I had this and Wicker Chair as my choices for this month’s comp and since we are a little light this month, I added this one too.

14. Title: Irene
Artist: Trixie Whitley
Album (Year): Fourth Corner (2013)
Submitted By: BoogieStudio22
Comments: What the hell?!? One more. Trixie Whitley is my current artist crush. I first heard her on Daytrotter in January and she’s won my ears. If you like neo-R&B/Soul, check her out. She’s the daughter of Chris Whitley, a well-regarded guitarist who died too young. You should check out catalog too.

Tagged  CXCW, download, Feel Bad For You, mp3.
Bookmark the permalink.
Logging In...