A Good Read, a Good Listen, and a Good Drink: Daniel Knox 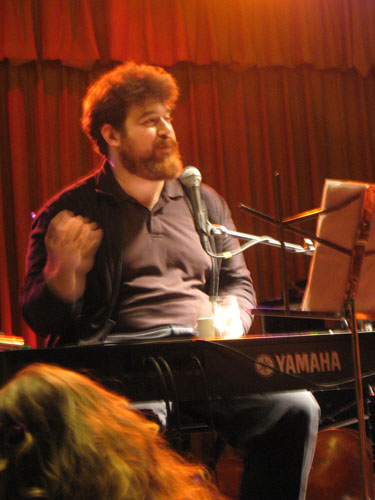 I am pleased to have the king of sardonic heart taking part in this series. Sardonic heart? you ask. Yes, because while Daniel Knox will make you laugh – if your humor is of a certain darker inclination – if you dig further down, you will find deep and jagged truths that might catch you on their barbs as they cling to your clothes with their familiarity. Yes, the world is broken, and we’re broken in it, but sit here a while, and we’ll share a grim laugh together.

Good Read:
Ask The Dust by John Fante
The most prominent in a series of novels about Fante’s alter-ego Arturo Bandini. I love all of Fante’s work but I’ve read this book more times than I can remember. Bandini is pure ego and contradiction, cursing someone and admiring them in the same breath. His writing style is full of a rambling honesty that doesn’t hold back. Anyone who has ever tried to write or create something will recognize Bandini’s courage and doubt as their own.

“The Road To Los Angeles” makes a good companion to this, as does “Dreams From Bunker Hill” which Fante wrote blind and limbless from his deathbed.

There was a piece of shit movie made of “Ask The Dust” in 2006. Don’t even bother watching the trailer. It’s the worst.

Good Listen:
“Gondola No Uta” (from Akira Kurosawa’s Ikiru) by Traditional.
I’ve always favored voices with character over ones with skill. I work as a projectionist and this song from the end of the film “Ikiru” always made me run out to the balcony to take it in whenever it showed. His voice is so small and on the verge of cracking, but I can’t imagine it sung better.

Good Drink:
I quit drinking a few years ago but not out of any great dramatic epiphany. I knew I was either bad at it or too good to keep going. But the best times I had were drinking alone and getting lost.

I used to drink the hell out of scotch but if I had to recommend a drink recipe to anyone it would be this:

wake up disoriented on a winter morning when you have nothing to do
take a box of DayQuill® gelcaps
follow this with a bottle of vodka
close your eyes
open them and you will be outside
now you are on a bus
sit on the back middle seat where it is warm and slightly elevated
feel the arms of the bus wrap around you as the city you live in passes both very fast and very slow all at once
show up someplace you haven’t been before.

Tagged  A Good Read a Good Listen and a Good Drink, Daniel Knox, links, video.
Bookmark the permalink.
Logging In...