One of these days, I will master the art of showing up to the Grog Shop at Just The Right Time – not too early, not too late. This past Friday was not that day. I missed all of Heelsplitter and caught one and half songs from the Not So Good Ol’ Boys. I can tell you that the audience was into NSGOB. And it was good to see that much long hair on dudes on a rock stage in Cleveland without any spandex in the vicinity. 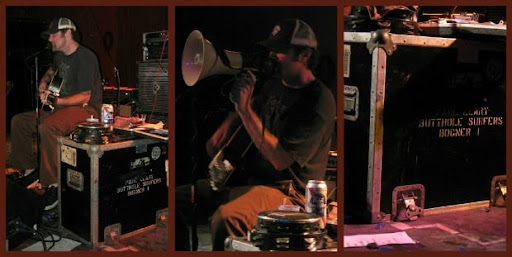 Witnessing a Scott H. Biram show might lead you to believe the phrase “Texas tornado” was invented for him. Biram even comes with his own siren, by way of the megaphone he keeps in his instrument arsenal. Offstage, Biram appears calm, unassuming… sweet, even. But once he sits down in the midst of the aforementioned instrument arsenal – which includes a few vintage hollow-body electric guitars, one angular solid-body electric, harmonicas, guitar pedals, stompbox and a pair of tambourines set on the edge of an equipment case to pick up the beat of the stompbox – and straps himself in, it’s as if something snaps inside him, and he is a whirlwind of energy, fury and conviction until he steps off stage.

The audience loves Biram. He will show his appreciation, for sure, but he won’t back down from telling someone to fuck off or shut up, as when someone requested that he “play something good”.

“I just played three good ones,” Biram rightfully pointed out.

Attitude is undoubtedly a big draw with a Scott H. Biram show. “This is a love song, so spread your legs” was his introduction to “Wildside”. Biram has just the right balance of sweet and ornery to pull off something like that (so don’t try this at home, kids).

But attitude is just air without the chops to back it up, and you don’t get a reputation as solid as Scott H. Biram’s by being just okay. From the bluegrass-style picking of Doc Watson’s version of “Freight Train Boogie” to the folk strumming of Woody Guthrie’s “Pastures of Plenty” to the heavy metal slide of “We Come to Party”, Biram is the kind of guitar player that makes it all look easy. And his harmonica playing is pretty much perfect.

While it can be overshadowed by all the amped up guitar and sweet-ass harp, Biram’s voice is also a beautiful instrument worthy of its own spotlight. Biram’s rendering of “Go Down Ol’ Hanna” is gorgeous and might have made Leadbelly a little envious if he was around to hear it.

But Biram’s forte is whipping a crowd into a stomping, hollering frenzy, throwing his whole self into a song, a one-man audio mosh pit – and all while seated. You won’t get any video examples of this from me, though, because all you would see would be a shaking blur due to all the actual stomping (and hollering) I was doing.

In addition to the previously-mentioned songs, Biram brought out “Time Flies”, “Long Fingernail”, Muddy Waters’ “I Can’t Be Satisfied”, a Mance Lipscomb tune dedicated to roadie/guru extraordinaire U.S. Justin, an unapologetic cover of Johnny Lee’s “Lookin’ for Love”, a handful of songs from the album he just finished recording before this tour started (slated to be released in October, and it’s going to be gooooood) and more songs that I didn’t write down. The man just goes, and good luck keeping up with him.

There was no encore, per se, Friday night. Biram announced that he had a couple of more songs, but those couple more songs turned into five or six more songs as he just played until he couldn’t anymore. He doesn’t go out with a bang because the whole damn show is one huge bang.