A Good Read A Good Listen and a Good Drink: David Majury, Slomatics

The Slomatics first formed in Belfast in late 2004, and since then have released several records. Recently they re-issued their first two albums, Kalceanna (2007) and Flooding the Weir (2005).

I’ve listened to both of them; my reaction was this is like being run over by a cement mixer and I mean that in the best possible way.

Here is my advice: lie down somewhere comfortable, rest your listening device on your stomach, put your headphones on, and turn it up. It might feel like meditating with a jackhammer, but it’s good for what ails you, I promise.

This is Viking Sea, from Kalceanna:

And, so y’all can see how they’ve grown over the years, here’s The Carpenter, from Estron (2014):

And with that, I turn the floor over to Slomatics guitarist David Majury, who joins us today to talk about a favorite book, record and drink. 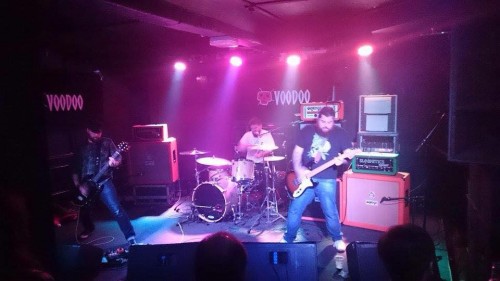 I’m not a particular fan of Julian Cope’s music, nor was I a fan of Krautrock when I first read this book. I do enjoy music biographies though and will read pretty much anything related, and this book was recommended to me in the mid nineties by a friend. I’ve chosen this book as its one I frequently re-read, often picking it up to read just a chapter, and I cant think of many other books where that’s the case.

I love this book because of how it’s written – Cope doesn’t go for the stuffy, over-earnest approach that makes so many biographies seem like dull lists of facts/events; instead he writes like its a wild ride full of excitement and amazement at this weird music. He makes words up (Ur-punk??), uses grammar as he sees fit and occasionally loses it completely, all with his innate sense of what he deems cool underpinning every opinion. His stories of the formative years of such obscure heroes as Ash Ra Tempel are written as if he were there and it’s impossible not to be transported to early 70s Germany when reading this.

The book also gives me a sense of nostalgia, as I read it pre Internet, when it was nearly impossible to actually hear any of the bands involved. At the time I was permanently skint, and £20 for an import of an album I’d never actually heard was big money in the mid 90s. It reminds me of a time when music wasn’t all immediate, when bands could still hold an air of mystery.

As much as I like the immediacy of YouTube, I remember how it felt like a real quest to hear obscure music, how it took months of searching in ’89 to finally get a badly recorded tape of the Misfits ‘Legacy of Brutality’ and how important that made it feel. I’d agonise over whether of not to mail order Yeti by Amon Duul II, half fascinated by the description of its eastern-sabbath riffs, half panicked by the words ‘folk rock’. That the music described in the book has never disappointed me, and pretty much all of it is now there in my collection, listened too all the time, is testament to this book.

When people find out I play in a band they always ask what sort of music it is, which is a natural enough question. The difficulty is describing the band without sounding like an arsehole. I’m not claiming that we’re some genre defying band, but to go on about being a fuzz-doom sci fi metal band with a sniff of shoe gaze and Hawkwind thrown in is just too much, so I stick with ‘heavy rock’.

This is usually followed by ‘You mean like Bon Jovi/Iron Maiden’ etc. It makes me realise that although very little of what I listen to is metal, a lot of it is heavy.

This album fits the bill perfectly, it’s unbelievably heavy in a way that no metal band could come close to, but it has absolutely nothing to do with that scene. The guitar tones are just massive, insanely fuzzy and bordering on being totally out of control. The songs are rammed with hooks and melody, yet avoid any conventional structure. Part Chimp are still the loudest band I’ve ever seen live and somehow they’ve managed to make records that sound every bit as loud, which is quite an achievement. It’s completely beyond me why this record wasn’t huge. An absolute classic.

In the Hipster Age of corksniffing craft beer freaks, this is probably a very uncool beer to drink. I don’t know if you can get it outside of Ireland. It’s kind of seen as an auld lads pint, and for people who can’t handle Guinness. I’m both of those things now, so I’m very comfortable with that.

Tagged  A Good Read a Good Listen and a Good Drink, Slomatics, song embed, video.
Bookmark the permalink.
Logging In...