A Good Read A Good Listen and A Good Drink: Pelicans and Their Allies

I was initially intrigued by Just Like July by Pelicans and Their Allies because a) that’s an awesome band name, and I wanted to see what they sounded like and b) the title references July Johnson from Lonesome Dove, and I’m a sucker for those kinds of cross-cultural references. When I pressed play, I was further reeled in by the power-pop tempo and the bright cello ribbon that gleams between the drums. But the thing that caused me to go and back and listen to it a few more times was the overarching message: This may not be the life (story) you had planned. It is the life (story) you can choose. Make it the best life (story) you can.

The rest of their self-titled EP will be out in late November. I can also recommend For All the Lonely Scientists and Nerds in Love.

Meanwhile, however, I am going to turn the floor over to Pelicans and Their Allies, aka Dayana Yochim and Robert Higgs, who have joined us today to discuss a favorite book, song and drink. 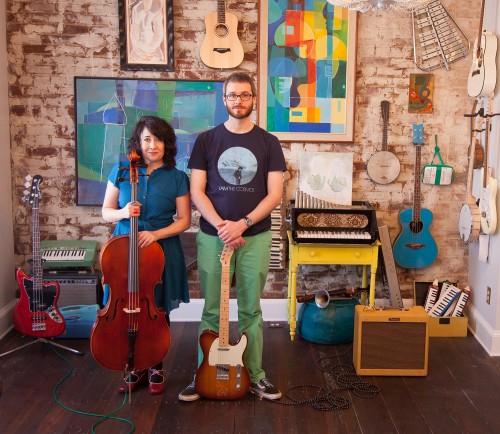 Robert: I first came across Dan Kennedy by listening to the podcasts Jordan, Jesse, Go! and The Moth. He’s a great self-deprecating and hilarious storyteller, a loveable and self-aware slacker. At the time I heard him on these podcasts he was telling stories from his memoir, Rock On: An Office Power Ballad, about how he worked as an executive at a major record label (Atlantic, maybe?)[ed note: yes, Atlantic!] thinking he would fuck shit up from the inside, like the true punk rocker he fancied himself to be at the time. But he just ended up doing things like writing the copy for a full page magazine ad congratulating Phil Collins on all his years of success, and pretending like he knew what he was doing. It’s a great book that made me laugh out loud a lot and reaffirmed my love-hate relationship with the mainstream record industry.

I’m currently reading his first novel, American Spirit. It’s just as funny, but with a lot more heart. It’s the story of an executive who loses his job and ends up living in his leased BMW (or as he calls it, “the Bavarian land yacht”) and popping pills and taking crafting and yoga classes. The best thing about it is Kennedy’s ability to maintain a tone that is pitiful and sad, but also hilarious and even uplifting throughout. Both books are great, so just pick whichever sounds best to you. If you like the one you get, you’ll just end up reading the other, too.

Dayana: The Nutshell Studies of Unexplained Death, Corinne May Botz. A photographic account of the work of Frances Glessner Lee, a well-to-do grandmother (an heiress, no less) who built meticulously reconstructed dollhouse crime scenes based on real-life cases in order to train investigators in the 1940s and ‘50s about the art and science of forensic evidence. Accident? Murder? Suicide? What does the (adorable/macabre) evidence tell you?

The book, which features details from 18 fully functional dioramas (working window shades; eensy weensy pencils with real lead; blood spatter on true-to-scale wallpaper pattern from the crime scene), appeals to the crafter of creepy things in me. That Frances was able to break through the bulletproof glass ceiling of the era to become a Captain in the New Hampshire police department based on her forensic work, well, that deserves a robust, “You go, girl!”

Robert: I’ve been listening to The Tallest Man On Earth ever since I heard John Richards play “I Won’t Be Found” on the KEXP Music That Matters podcast five or six years ago. As soon as I heard it I bought the record and have bought every Tallest Man On Earth album ever since. Every one of them is great all the way through, especially his newest, Dark Bird is Home, which is a little different than the rest. All the previous records were mostly intimate solo performances--just him with a guitar or a banjo. Every now and then a song might have a bass on it, or a second guitar, but everything was pretty stripped down. I didn’t know the newest one had a full band until I started listening to it.

It’s funny how changes can be so unsettling at first. I couldn’t help but think that the solo performance element was one of the things I loved most about him, so the idea of full band arrangements made me think, “OH NO. If it’s not broken, don’t fix it.” But, of course, what’s great are the songs that he writes, and the new arrangements elevate the songs and make them so lush and beautiful. Plus now when you see him live you get to hear some of the old songs played by a full band and it’s a gorgeous change. Here he is with his amazing band on Conan:

Dayana: The first time I heard Devin Davis’s Lonely People of the World Unite (thanks for the recc, Robert!) — from the opening crash of power-pop chords on Iron Woman all the way through to the warbly, plaintive oooos over acoustic strumming on Deserted Eyeland — I fell in love. Like, awkward adolescent fawning fangirl love. The record goes by at a blinding pace, with every song a tight, layered and complex composition with breathless energy and vivid, playful and earnest (no air quotes) lyrics. (Speaking of lyrics, Robert first “heard” Devin Davis at his wedding when his best man read a passage from Turtle and the Flightless Bird. I’ll pause here for an awwwwww.)

Lore has it that Devin took two years to craft this beast during off hours at the recording studio where he worked. He played most of the instruments himself and, I imagine, obsessively added bits and bobs to each song (including multiple years worth of live fourth of July fireworks recordings) until finally collapsing in an exhausted heap and crying out, “Uncle!” I made up that last part, but I hope there was at least a dramatic mic drop and door slam when he put this perfect album to bed.

My “Best Awesomest Perfect Pop Songs Ever” playlist starts with Devin’s Giant Spiders, segues into Shangri-La, by the Kinks, Back in the Saddle by Someone Still Loves You Boris Yeltsin, the Velvet Crush’s One Thing Two Believe, endless repeat.

Robert: It’s so hard to pick a favorite anything, because there’s so much good stuff out there. So with all my choices I’m just going with whatever is grabbing me lately. I moved to Atlanta about six months ago and my wife and I have really enjoyed being close to the Atlanta Beltline, which is one of those pedestrian-only this-is-where-some-railroad-tracks-used-to-be pathway/park thing that goes right through the middle of town. There are plenty of restaurants that are right on the Beltline and are great spots for a relaxing happy hour. Our favorite is a place called Ladybird.

It looks like it was designed as an adult’s memory of what summer camp was like. In other words, it’s like the restaurant version of the movie Moonrise Kingdom, which is right up our alley. So we go there and have this drink called the Days Gone By. (The menu says it’s made from Pimm’s No.1, Fords Gin and Second Self Thai Wheat Beer. ‘Gin’ and ‘beer’ are the only ingredients I recognize.) It’s the perfect fall (which in Atlanta is just late summer) drink to sip while doing some quality people/dog watching.

Dayana: Robert can have his fancy-pants frou-frou Pimm’s Wheat Self-Actualized Thai Gin Fa La La drink with fresh Unicorn Tear sprinkles. Me? Just slide any old domestic lite beer my way and I’m a happy camper. Nope… doesn’t matter what brand. Lukewarm? No problem. Twist top? Even better. If I need to class it up a bit I’ll order a cider (again, I’m no brand snob . . . unless the bartender mentions the word “pear,” in which case, “Hells yeah!”), or a Hefeweizen (because I can pronounce it and it doesn’t look weird if I toss in a slice of citrus to cut the beer flavor).

Tagged  A Good Read a Good Listen and a Good Drink, Pelicans and Their Allies.
Bookmark the permalink.
Logging In...