A Good Read A Good Listen and a Good Drink, Adam Turla, Murder by Death

Bitter Drink, Bitter Moon, the sixth record from Murder by Death, has pretty much everything I like: big roaring drums, delicate and occasionally super creepy string sections, and songs that double as good stories.

Such as Lost River – in which a husband begs a wife to drown herself to join him in the afterlife – for which they have made the dark and lovely animated video below:

They are, as we speak (type?), taking their show on the road, with sold out shows at the Mercury Lounge in New York next week, followed by stops in Baltimore and Cleveland. They’ll also be at the Wakarusa Festival in Arkansas in June.

Meanwhile, here is Adam Turla (vocals) to tell us about his current favorite book, record and drink: 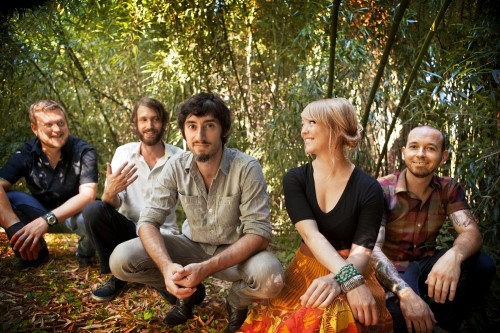 Last year I read Monuments Men: Allied Heroes, Nazi Thieves, and the Greatest Treasure Hunt in History [by Robert Edsel] – a great book that turned into a pretty weak movie. The book is the true story of the World War II division of the US Military that was assigned to protect, locate and retrieve art stolen by the Nazis. I’m not usually a WWII buff, and I was shocked and horrified by the idea that Hitler was not only trying to eliminate a race of people, but also wanted to erase their culture and history.

And what was so fascinating and nightmarish (like the movie Brazil or something), he did it all by creating legislation that revoked the Jews’ right to own art, then had the Nazi state forcibly seize their property for “safekeeping” as part of a fever-dream vision of a massive museum full of looted masterpieces to be built in his hometown. What they deemed “too Jewish” or grotesque/modern (for example, Picasso) they would burn. An incredible read for both the terror and the triumph of crushing Hitler’s dreams of a shitty future.

Lately I have revisited Massive Attack’s Mezzanine. It’s a wintery album that really gets you in a mood. The song that’s always knocked me out was Teardrop – kind of an obvious choice but I love it. Great record for sexy times.

Funny, I’m taking it easy on drinking this month. But lately I have enjoyed a Boulevardier, which is basically a Negroni with bourbon instead of gin. I love gin, but our drummer left a bottle of Ancient Age at my house and I’m happy to relieve him of it. It’s 1 1/2 oz bourbon, 1 oz Campari, 1 oz Sweet Vermouth, stirred in a tall glass with ice, then pour into a tumbler on or off rocks. Garnish with orange slice if you’re feeling like a fancy lad.

Tagged  A Good Read a Good Listen and a Good Drink, Adam Turla, Murder by Death, video.
Bookmark the permalink.
Logging In...