A Foreign Country is a non-regular series in which I write about music I dug in my youth and still enjoy now. The name comes from the L.P. Hartley quote “The past is a foreign country: they do things differently there”, because, while I do continue to enjoy some of the music I listened to in my early days, my tastes have changed since then (thank fuck for that) and even the songs I still like are heard through different ears. 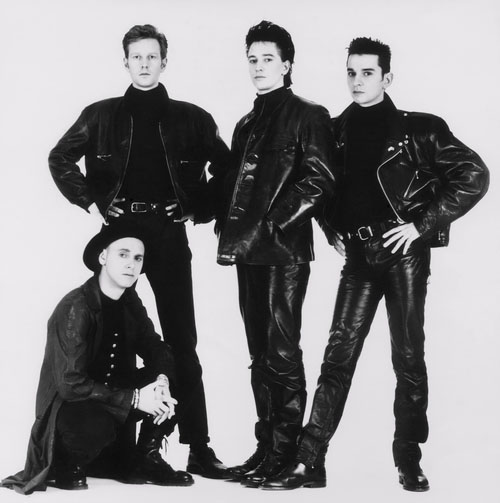 Depeche Mode initiated me into puberty.

This is an exaggeration, of course. I had already been a fan of Depeche Mode – then composed of Martin Gore, Dave Gahan, Andy Fletcher, and Alan Wilder – for a couple of years when their album Music for the Masses was released. I was 14, and the album brought DM up so high in my estimation that they might have even had a chance of knocking Duran Duran from their throne as my favorite band. It was a great album, an evolutionary step forward in their career, rich and meaningful. And one of those meanings, the one that spoke loudest to my hormone-addled mind, was sex.

In retrospect, though, I see that it wasn’t about sex: Depeche Mode introduced me to desire. I had no solid concept of sex, but songs like “Behind the Wheel” (you’re fooling no one with your clever car allusion, Mr. Gahan) and “I Want You Now” stirred up heat and longing inside me, a deep, full-body-and-mind desire that wouldn’t be elicited by another person until several years later.

“I Want You Now” – Depeche Mode

The thread of desire is stitched heavily throughout the Depeche Mode catalogue from Black Celebration on – “Stripped”, “World in My Eyes”, “I Feel You”, etc. – reinforced by the feminine and feline sensuality displayed by frontman Gahan onstage (“I’m basically an overpaid stripper,” he recently said about his stage presence), and backed by sometimes throbbing, sometimes slinky rhythms.

The band’s career has had its peaks and valleys, as would any career that’s been going for over 30 years – ever-mounting success, followed by Gahan’s struggle with drug addiction, Wilder’s departure, and some uneven albums – but Gore, Gahan, and Fletcher have managed to hold on, with their nails dug in deeply. And with the release of the first single, “Heaven”, from their forthcoming album Delta Machine, the band may be poised for a new wave of success.

There is some sense of personal pride in watching a band you’ve loved since your formative years continue to produce new music as inspired as this when you’re firmly ensconced in adulthood.

Delta Machine is slated for release on March 26, and Depeche Mode will be touring the world throughout the summer.