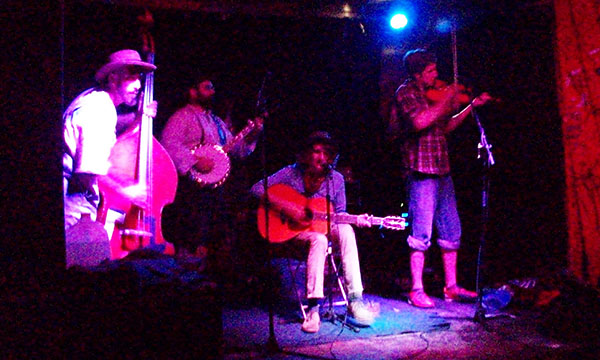 Many fledgling bands find that audiences respond better to their cover songs than their originals. While, sure, part of the reason for that is that people are creatures of habit who love what is familiar, another part of it is that bands in their early stages are also more comfortable with what is familiar, finding it easier to let loose on a song they’ve been listening to for years than one they wrote in the garage last week. Johnny and the Applestompers, whose singer appears to be mostly comprised of sticks and who have the gamest bass player I’ve ever seen, are one of those rare young bands who rock their originals even more confidently than their covers. While they covered everyone from Merle Haggard to Gus Cannon’s Jug Stompers, it was their originals, based firmly in Americana traditions, about drinking whiskey and pretty girls not giving them the time of day that were the most compelling. 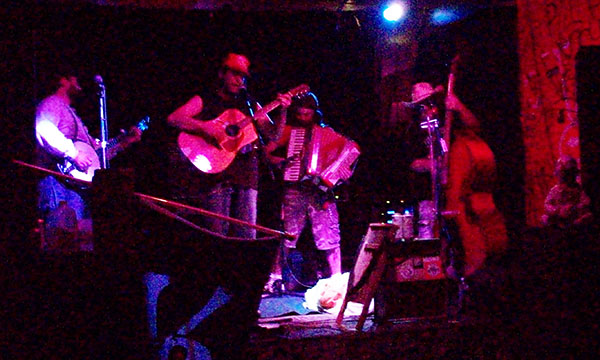 I’m going to admit right now that the Misery Jackals just aren’t my thing, but I have no problem giving them props for being a tight, hard-working band who seem like they’d fit right in with the Farmageddon Records crew. And I don’t think it’s irrelevant to add that they seem like genuinely good people. I spent some time talking with bass player Doghouse Tim, and he is such a down-to-earth, hard-working guy who genuinely and deeply loves playing in this band that he made me want to support them no matter how I felt about their music. For me, that’s what all of this is all about: people doing what they love just because they love it. 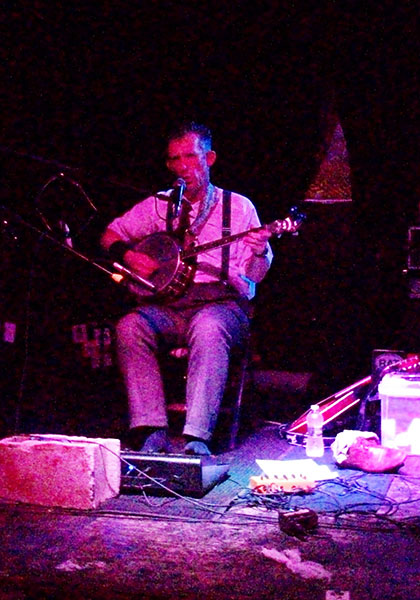 It’s been a couple of years since German one-man band the Dad Horse Experience touched down on American soil, but judging from his grand showing at this year’s Muddy Roots Festival, he’s gained a respectable following here, and I hope it means it will be less than a couple of more years before we see him again.

When I first wrote about Dad Horse here, I noted how odd it can be for an American listener to hear this clearly American-influenced blues-folk-gospel coming out with a German accent. But what brings the listener back is the fact that this is clearly no gimmick, not a joke. Dad comes from a place of real love for artists like Washington Phillips, the Carter Family, and Hank Williams, and he pours that love back into his own music and his performance. While effortlessly playing banjo or mandolin, manning his bass pedals, and sometimes throwing in a little kazoo on top of it all, Dad sang, hollered, and bleated right from the heart throughout his set.

Between offerings like the Carter Family’s “Can the Circle Be Unbroken (By and By)” and originals like “Dead Dog on a Highway”, “Through the Hole”, “The Party”, and “Gates of Heaven”, Dad spoke to the crowd evincing a presence somewhere between friendly stranger and itinerant preacher, sharing stories and scenarios that sometimes seemed to be told with a wink and a knowing nod. And while sing-a-longs are generally cloying and uncomfortable experiences, the audience joining in strongly with Dad on the chorus of “Lord Must Fix My Soul” was a highlight of the night.

An aside: Now That’s Class has one of the best sound set-ups around. The acoustics are great, and the sound isn’t mixed for a point somewhere 20 feet behind the back wall like other venues. This is fantastic when a band is playing. But it is the opposite of fantastic when audience members forget they are in a public space and not their own living rooms. Places like Now That’s Class have two whole rooms you can be in, so if you absolutely must carry on that long conversation rightnowcan’twaitaminutelonger, show your fellow patrons a measure of common decency and take that conversation to the room where someone is not trying to perform so it won’t matter that everyone in the room can hear every, single word of your conversation. Also, asking a German performer if he is a “kraut rocker” does not make you clever and special; it just makes you obnoxious.