A Good Read, a Good Listen, and a Good Drink: The Wind-up Birds 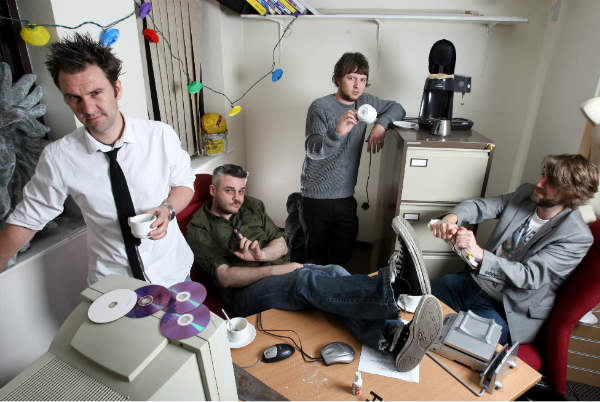 Our feature on the Wind-up Birds has only just scrolled off our front page, and I’ve already brought them back. But when a band is named after a novel (in this case, The Wind-Up Bird Chronicle by Haruki Murakami), it’s a cinch that they should take part in this series. That and the fact that I fucking love them and their smart, meaty “noisy pop”. I’ve been compelled to listen their album The Land at least once a week since first hearing it, and it will easily make, and possibly top, my favorite albums of 2012 come December.

So, I’m very happy to have these lovely gentlemen – Oli on drums, Ben on bass, Mat on guitar, and Kroyd pulling vocals – share some great recommendations with us.

“Meet Me at the Depot” – The Wind-up Birds

Good Read:
American Psycho by Brett Eastern Ellis
I saw the film then read the book. The book delves a lot deeper into Patrick Bateman’s psychotic and pedantic nature which made me laugh, especially the entire chapter on Phil Collins.

Good listen:
Days – Real Estate
Ha. Bet the rest of the band thought I’d put Wowee Zowee (by Pavement). Real Estate are sort of mellow and have ace guitar melodies. The drums stand out cause they sound really well thought out and the vox reminds me of Wayne Coyne at times.

Good drink:
Ginger Real Ale (link is example of one brand of ginger real ale)
I’ve found this in a few pubs and it’s ace. Like the best beer combined with ginger biscuits/cake/snaps. Goes down brilliantly.

Good Read:
Homicide: A Year On The Killing Streets by David Simon
An incredible book about an appalling subject: a year in the life of Baltimore’s Homicide Department, who deal with almost a murder a day. Absolutely compelling from the first page, the fact that Simon manages to capture the horror, the hopelessness, the camaraderie and black humour of the job, whilst wrapping it all into a gripping narrative is quite astonishing.

Good Listen:
Curses – Future of the Left
If you ask me this tomorrow it’ll be different, but today it’s Curses by Future of The Left. A storming debut: brutal, angry, snarly guitars and spiky synths over great slabs of filthy bass, and punishing drums. Best thing to come out of Wales since The Holy Bible (The Manic’s album, not the rather fanciful book….).

Good Drink:
Grand Marnier
My Mum got me into this, telling me it was an old family recipe to help get rid of a cold. Doesn’t exactly cure colds, but after a few you don’t feel too shabby anymore. It’s a bit decadent, but I love a glass of this over ice whilst working through a good box set of DVDs. It’s seen me through Battlestar Galactica, Eastbound and Down, Boardwalk Empire and most of The Wire so far!

Good Read:
A Spot of Bother by Mark Haddon
He writes without pretention and he understands how different people think. Both things I find very impressive.

Good Listen:
Overcome by Happiness – The Pernice Brothers
The difference between an average songwriter and a great one isn’t that huge. A slightly different angle taken on a familiar theme. There is nothing ground breaking about the music on this album, but it is the sound of Joe Pernice, a classic songwriter at the top of his craft. The title track has my favourite middle 8 of all time.

Good Read:
Retromania by Simon Reynolds
Its a great but fairly depressing book about the cul-de-sac that modern music finds itself in. Endlessly referencing, recycling and cataloguing the past and the effect of Ipod culture on how we absorb music etc.

We find ourselves in a time where most music is about music and most bands just talk about other bands and records etc. I think most art is in the same predicament at the moment, dangerously closeted and distant from the issues that need tackling. Sorry, bit miserable there!

Good Listen:
Cut – The Slits
Having said all that an album I am currently obsessed with was released in 1979! I think this is one of the best debut albums ever and sounds as new and exciting as ever. Funny, fresh, organic and cool. Go listen to this album if you haven’t already…No do. Do it now!

Good Drink:
Dandelion and Burdock
One of the songs on our album is called “Pop Man” and references the fact that when I was a kid there was a guy who came round the area delivering pop (I guess you would say soda in the U.S.!) door to door. Its a kind of obsolete way of doing things now and those guys don’t exist. So in tribute my recommended drink is a classic British pop flavour – Dandelion and Burdock!

“Some Slum Clearances” – The Wind-up Birds

The Wind-up Birds @ Facebook (If you’re in the Leeds, UK, area, check out their FB page for some upcoming shows.)

Tagged  A Good Read a Good Listen and a Good Drink, links, The Wind-up Birds, video.
Bookmark the permalink.
Logging In...