Someone’s wall is about to get much more badass… 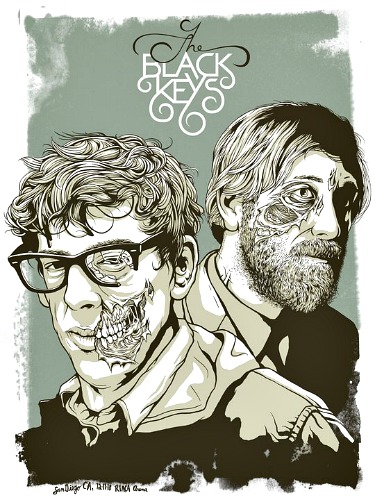 Two years? Fucking two years? How did that happen?

Now This Sound Is Brave is two years old today. And year two was even more exhilirating, life-affecting and life-affirming than the first year. We have heard so much great music, seen so many righteous shows, talked to so many cool people and made some amazing friends. I could be here all day listing people who deserve our thanks, like the bands who share their work and sometimes their friendship with us, the good people who run and staff the venues where we see shows, the other blogs who have given us encouragement, the CXCW crew… There’s a whole damn lot of people, is what I’m saying.

But I do want to give individual thanks to four special individuals. First, to NTSIB’s beneficiary, the person who provided the idea in the first place, provides the access and provides the equipment that helps me keep this thing going, Duane. Next, to my intrepid co-blogger who gets giddy with me, makes me laugh and has more than pulled her weight lately, Jennifer. Then, to my wonderful friend, confidante, mentor and so many other things besides, Rick, whose encouragement, belief and helping hand have changed the whole game for me. And most of all, to YOU. You beautiful fucking people who come and read and check out the music and support the bands and support us. I fucking love you. Thank you for being here.

Okay, enough sentimental bullshit! I know there are five of you who are very eager to learn who won that droolacious Black Keys concert poster. That winner is: Jessica H! Jessica’s entry typifies the passion for music, and the passion for helping connect others with music (as a Black Keys fan whose co-blogger is a Panic! diehard, I could relate), that I hope we show here on the blog. Jessica, I’ll be in touch soon to find out where to send your prize (and, yes, I do want to see pictures of dog Dan Auerbach… oh, I do…).

For your enjoyment, the winning entry:

I remember my first not-Raffi concert vividly: my dad took me to see Ozzfest in Las Vegas. It was the first time I was cognizant of marijuana (“What are they rolling on their programs, dad?” “Oh, um, I don’t know, Jess.”) and it was the first time I felt the center of my chest vibrate, just as the concrete of Thomas & Mack was vibrating, from the incredibly loud music. Pantera played an extra long set (I didn’t know what a treat that was at the time) and I heard Black Sabbath play all the songs I’d listened to as a little kid with my dad. He shared a fond story of seeing Black Sabbath and Blue Oyster Cult with my mom at the Ventura Fairgrounds in 1980 — it was so loud that they got noise complaints from miles behind the stage, so he said. And I saw Marilyn Manson who was my latest curiosity. The flesh-colored boobsuit? The Hilteresque podium and grandstanding? What did it mean? Why did he do it? It was so fascinating. But that’s not my favorite musical moment.

My favorite musical moment is probably my least favorite concert ever. I took my baby sister to her first concert: Panic at the Disco at a venue in San Diego. She’d been obsessing over them — my whole family knew all the lyrics to all of their songs because we heard Panic so much — and she was ECSTATIC to finally see them live. The venue was overcrowded — dangerously so — and it was hot. So fucking hot. The place was crawling with screaming adolescents. My sister kept wanting to get closer, closer to the stage and even though I saw security pulling crushed and crying little girls from against the railing by the stage, I acquiesced. My less-adventurous middle sister went to hang in the back so that left me, as chaperone, next to my baby sister who kept pushing forward. The crowd surged and swirled and I kept a firm grasp on my sister who was rocking a permanent grin. Since my adolescent Ozzfest, I’ve traveled the country to see amazing concerts, but I’ve never been so packed like a sardine at a concert ever. As the crowd swayed en masse, my sister and I commiserated about how soaking wet we and our clothes were. We realized that it wasn’t our own sweat — it was the sweat of the strangers pressed up against us. Yuck. Big smile. I saw fights and fists as people bumped into people. Feeling maternal (and unsafe) I asked my sister to go to the back with me but she pleaded no, please, Jessica, please, I want to be closer. Okay, okay. At one point she looked at me, I thought she was going to cry, I hope she was going to ask to move to the back, but instead she said, out breath, “Jessica? I forgot to wear a belt today and my pants are falling down and I can’t move my arms to reach down to pull them up. Will you pull up my pants?” So I elbowed my way down to pull up my sister’s jeans because the crowd was so tight that she literally couldn’t move her arms. That’s my favorite music memory: sharing my sister’s first concert with her because the mix of emotions that music elicits is to be shared. It might be a better memory than losing my virginity. Certainly more sweaty. Let me think about that.

As an aside, I’ve never really had a favorite band. Even when I was in elementary school and my friends screamed over New Kids on the Block, I was too cool for that. Those girls were stupid. I never had my own Panic at the Disco. I’ve loved Led Zeppelin, like everyone else (thanks, dad); I love Neil Young and Radiohead; and I had a pretty serious Talking Heads phase… But I don’t know if any of those are favorite musicians . . . Till the Black Keys. I’m an adult woman and the Black Keys are my favorite band. Like those girls in elementary school, I have a band I listen to pretty much every day; I have their full discography on vinyl that I’ve culled from various record label stores and music shops, despite my poverty; and I have a dog named Dan because he looks exactly like Dan Auerbach. The Black Keys introduced me to dirty, Fat Possum blues and I love them for that, too.

I can send you a picture of Dan Auerbach if you’d like but he’s wearing a cone of shame right because he just got castrated and he won’t stop licking his scrotum.

Love and thanks to the other entrants – Sam G, Ashleigh Jordan, Yoin Segundo and the esteemable Mr. Dave Polak. You rock hardcore.