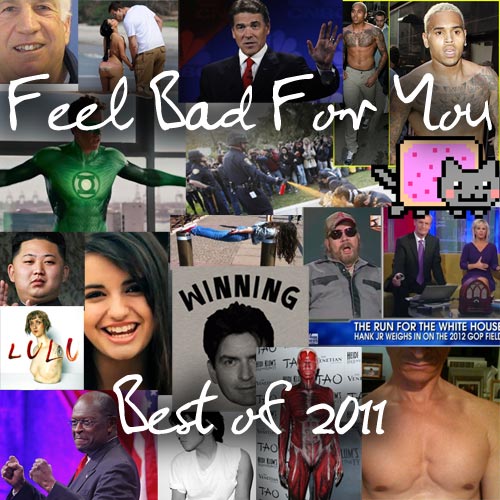 The FBFY talent pool has corralled a smattering of favorite songs of 2011. Eclectic, quirky, odd… and that’s just the contributors. Stream or download below.

2. Title: New Orleans
Artist: Robyn Ludwick
Album (2011): Out Of These Blues
Submitted By: Mando Lines (Jim Warren)
Comments: My favorite track off of one of my favorite records of 2011. Robyn Ludwick is a Robison, as in sister to Charlie and Bruce, but she’s got her own take on being a singer-songwriter. As New Orleans demonstrates, her voice is sexy, her lyrics are smart and her songs are real.

3. Title: The Reckoning
Artist: Mount Moriah
Album (2011): Mount Moriah
Submitted By: Ryan (Verbow at Altcountrytab)
Comments: One of the more upbeat songs off this album. Sweet vocals, beautiful melody, just makes you feel good all over. If you’ve ever liked any music described as “alt-country” you need to check this album out. A perfect blend of country and indie rock – go get this one now.

4.Title: I Make Enemies
Artist: Daniel Knox
Album (2011): Everyman for Himself
Submitted By: April @ Now This Sound Is Brave
Comments: Since I already submitted my favorite song of 2011 to the August FBFY, here’s my top runner-up from Couch by Couchwest alumni Daniel Knox. With some help from Akron, Ohio’s own Ralph Carney (Tin Huey, Tom Waits, the Black Keys), Knox spins a heartfelt tale of love for humanity. Ah, my cockles, they are warmed.

5. Title: Out With The Embers
Artist: Ghosts I’ve Met
Album (2011): From A Spark
Submitted By: erschen

8. Title: You Devil You
Artist: John Paul Keith
Album (2011): The Man That Time Forgot
Submitted By: @mikeorren
Comments: Lots of new music this year, but I keep going back to this one. And I’m always a sucker for a Devil song.

9. Title: Workin’ Man Zombie
Artist: 4 On The Floor
Album (2011): 4 x 4
Submitted By: toomuchcountry
Comments: Nothing like a little optimism about the working life to begin the new year.

10. Title: Shut Up And Love Me
Artist: The Dead Exs
Album (2011): Resurrection
Submitted By: @Popa2unes
Comments: I’m trying to make it on 10 dollars a day, I’m working part time and their docking my pay, My baby tells me we got three mouths to feed, I’d stop complaining if she just say to me, Shut up and love me.

11. Title: Sweet Disposition
Artist: Lori McKenna
Album (2011): Lorraine
Submitted By: @Rockstar_Aimz
Comments: I think that this song may be about me.

13. Title: Ashes Of Burned Out Stars
Artist: The Pollies
Album: N/A – Live From The Shoals track (rough)
Submitted By: Corey Flegel – This Is American Music
Comments: The Pollies are just another band along with DBT, Jason Isbell, The Civil Wars, Doc Dailey, and Lauderdale that hail from Muscle Shoals, Alabama. No big deal…they will have their proper coming out party in 2012. Be ready…

14. Title: Freaks and Geeks
Artist: Childish Gambino
Album: EP (2011)
Submitted By: Phil Norman | @philnorman
Comments: My favorite records of the year would be folks like Jason Isbell, Chis Thile & Michael Daves, Glossary, and Gillian. But when I looked at my iTunes playcounts, a little guilty pleasure was right there at the top. Donald Glover is insanely talented.

15. Title: Bummer
Artist: JEFF the brotherhood
Album (2011): We Are The Champions
Submitted By: annieTUFF
Comments: I was able to catch JEFF the brotherhood at the Pilot Light here in Knoxville back in September, and I feel really lucky that I did. It was an amazing show, one that I keep thinking about. (I posted about it on my tumblr…just in case you wanna see pics) It was definitely in my top live shows of 2011, sooooo I decided to pick a song off their 2011 album “We Are The Champions” for this mix.

Tagged  download, Feel Bad For You, song embed.
Bookmark the permalink.
Logging In...