A Conversation with Rick Steff

Our friend Michelle Evans has another report from Nashville for us, this time with the diversely-talented and widely- and highly-regarded Rick Steff. 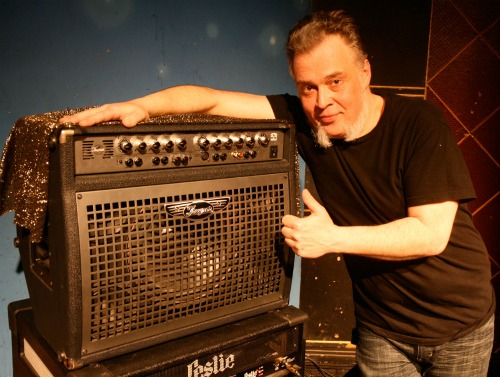 Rick Steff, to me, is one of the best things about Lucero, so I jumped at the chance to speak with him at Mercy Lounge in Nashville. We discussed life in Lucero, his incredible career as a journeyman, and, last but certainly not least, his daddy. (Turns out, his father and my grandfather may have played together with the Ringling Bros. Circus.) Long ago dubbed by yours truly as “The Nicest Man Alive,” Rick is as talented as he is nice. I think you’ll agree.

What have you been working on recently?

Well, I do a lot of records. I’ve been on more than a couple hundred records. Most recently, the records I’ve done outside of Lucero, that I think are of certain note, are the Amy LaVere record, Stranger Me, that’s on Thirty Tigers. John Stubblefield also performed on it, and it’s just a really unique record by a really unique artist that we’ve had out on the road with us before. Her back-up band, at that time, was Paul Taylor, who’s worked with John and went to school with John, and Steve Selvidge, who played with Lucero during Brian Venable’s tenure away, and he’s now in The Hold Steady, who are all friends of ours. They aren’t the guys on this record, but that’s kinda where she comes from. The record was produced by Craig Selby, who did the Arcade Fire record, The Suburbs, that won Grammy of the Year this year, so yeah, Stranger Me is a real great record. It was kinda put together last minute, so we kinda built this record from scratch, so I’m real excited about that.

I’m always working on different projects. Last year, it was Huey Lewis and The News.

Did you, really? I love that.

Yeah, I did the Huey Lewis and The News reunion record, which was really awesome. He was hilarious. Huey was recovering. He had had a stint put in his heart.

It all kinda started in the previous year. I had done this record and movie with a guy named Klaus Voormann, who was the guy that drew the Revolver cover for The Beatles and was the bass player on John Lennon records and George Harrison records. He’s really one of the guys who discovered the Beatles. Anyway, he was 70, and he was going around the country reuniting with all these people he had worked with throughout the years and making a movie. So he came to Memphis to do a track with Bonnie Bramlett, and I played on that. We hit it off, and ultimately I got to play on the tune that he cut with McCartney and Ringo, so that was really cool, and it’s in the movie as well, which is called A Sideman’s Journey. It’s Klaus Voormann and friends, and it’s really just a movie about people who do what I do. Journeymen.

So back to Huey. The cool part is, he was getting his surgery done, and I loaned him the film to watch while he was in the hospital, and I got a voicemail from him – still have it on my computer – “Rick Steff. Huey Lewis. Big fan of your work. Just wanted to call and tell you that I love that you were in that movie.” So I’ve got a voicemail from Huey Lewis thanking me for a movie I was in. It’s, like, really surrealistic shit which doesn’t really happen to me. So, yeah. It was awesome. So, ya know, sometimes you get to do stuff that’s really cool.

So you really keep busy.

Yeah, and that’s not all! [laughs]

Just got through working with a young girl, who’s record I’ll finish next week, called Alex da Ponte, from a band called Yeah, Arturo, and I’m really excited about that. I think she’s gonna be someone to watch. She’s really good.

I don’t think we can do an interview without mentioning your dad, Dick Steff, and his legacy.

Oh, yeah, well Dad, ya know, played on all these great records: Isaac Hayes’ Shaft, Dusty Springfield’s Dusty in Memphis, Rufus Thomas’ Do the Funky Chicken, Elvis’ Complete American Sound Studios Sessions, which was the “Suspicious Minds”/”Kentucky Rain”/”In the Ghetto” time period. I would go with him to sessions, and I just wanted to be Dad. I just wanted to do what he did.

There’s a gentleman here playing horns for Lucero who studied under your father, correct?

Yup, Scott Thompson. He did our most recent record and played live with us, and he was one of Dad’s main students and worked with him for a long time. He plays probably closer to my dad than anyone else I know. It’s wonderful. It’s a personal thing that’s also nice for me.

Jim Spake also studied under dad. Dad taught Jazz Theory and things like that at Memphis State, now the University of Memphis, so if you were a music major in the ’60s and ’70s, you kinda almost had to take something from him if you were a jazzer, and most horn players tend to be jazzers to some degree.

So it’s incredible. I mean, these are people my mom knows and loves.

How did you first start with Lucero?

Oh, that’s an interesting story. Again, doing journeyman kind of stuff. A guitar player I worked with a lot is a mutual friend of John’s, named David Cousar, who worked on Amy LaVere’s record. John was helping coordinate a session for this poet friend of ours named City Mouse. I didn’t know him at the time, but it was a spoken word thing, and he wanted an accordion, upright, acoustic guitar, and drums, so David Cousar, John Stubblefield, Roy Berry, and I played the backing track at a guy named Chris Scott’s studio. So we did this record, and I hit it off with Roy and John, and they were toying with the idea of having some keyboards, because there had been keyboards on the records in the past, before I came. So we tried it, and I didn’t leave. We just hit it off, and it was awesome, and I felt very lucky. It came exactly through a journeyman type of situation.

When someone you’re an uber-fan of, like Ben Nichols, says how much integrity and talent you bring to Lucero, how does that make you feel?