Home » feature » A Conversation with Austin Lucas, Part I

A Conversation with Austin Lucas, Part I 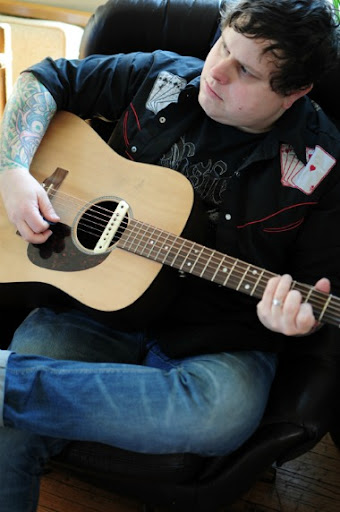 We continue our interviews from good NTSIB friend Michelle Evans (of Dear Ben Nichols and The Vinyl District: Washington, D.C.) with the first part of her chat with the lovely Mr. Austin Lucas. Check out Austin, Drag the River and many more at SoundFest in Seattle, which starts today and runs through Sunday.

I’m of the ilk that while I want the people I love making music to do well and sell records, I wouldn’t wish fame on anyone. It just seems like the worst fate imaginable to me (but that’s just me). One of the things I appreciate most about you is your accessibility. Is that something you make a point of doing?

Sometimes I feel like when I’m doing a show, I’m there to see the people at the show and not the other way around. I try to be as open and interactive with my fans as possible, personally. The thing is, it’s not like any of us are famous, you know. I mean, some of us more than others. But even if you go see the stuff that you love in an up to 500 capacity venue, and even if it is sold out, that’s 500 people in that town, and if you think about what it’s actually like to be famous, it’s like being in awe. I mean, being at this level allows a certain amount of interaction, and that’s a beautiful thing about it. You can still be interactive, and you can actually become friends with the people who listen to your music rather than have just a bunch of nameless faces that are buying your product.

Though buying your product is great. You deserve to make a living doing something you love. Some people hold a viewpoint that opposes that, and I don’t understand where that comes from.

I think there are a lot of people who frown upon it. I don’t personally care for those folks, especially the band folks that pretend that’s not what they want and kind of cast off people the more popular they get. That’s always been something that’s really bothered me personally. You know, everyone wants to be popular, and everyone’s gonna ride it as far as it’ll take them. I mean, not everyone wants to be mega-famous, but people want fans at their shows. I mean, it’s depressing to show up in a town and have nobody there. Absolutely nobody fucking wants that, and, you know, I think that it’s a really interesting dichotomy that, like, it’s okay of 200 people come and see you, but it’s not okay if 500 people come and see you, or it’s not okay if a thousand people come and see you?

I’m not gonna lie. As a fan, do I love it when I go to a show, and there are only, say, five other people there? Sure. Yeah, that totally rocks for me, but I understand that it may not necessarily rock for the band trying to make a living.

I mean, it can be really, really fun, depending on the situation, but if you’re talking about making a living and the repercussions of there only being six people at a show, there’s more going on than a lot of people think about. There’s the fact that you’re probably making less money or making no money, and there’s a guarantee, and there’s a promoter, and they lost a bunch of money on it. The odds of them doing another show for you go down dramatically. Also, the odds of other promoters doing a show for you also go down dramatically. Trust me, I know, because that’s my life.

So how did you start playing music?

I’m naturally a very lazy human being, which is why I’m a musician in a lot of ways. You know, because I had no interest in going to school, and it was the only thing I was naturally, predisposed to being good at, and I’d already been playing music my whole life, since I was a little child, so I just kind of fell into it. It was kind of, like, well, what can I do that requires the minimal amount of effort with the most payback? All right, well, I’ll play music. I’m gonna keep doing that. It’s fun, and I was always good at it. I mean, maybe not the greatest in the world or anything like that, but it was something I was always decent at.

Personally, I’m a huge fan of the bluegrass influence in your music.

Well, I’m definitely not at all real bluegrass. I mean, I definitely have bluegrass influences and stuff like that, but as a genre, serious bluegrass fans would definitely not call me bluegrass. The only people who ever do are people who don’t really know but maybe hear the banjos and the fiddles and call it bluegrass. Bluegrass is a very, very specific style of music, and I might utilize a lot of the motifs that are involved, and I’m definitely very heavily influenced by bluegrass, but more honestly by mountain music. That’s really more of what inspires me, at least for my first several records.

That’s true, which is why I said “influence.” [laughs]

I’m used to people calling me bluegrass, and I’m always like “uh-uh”. For me, I’m just immediately like, “Nope.” Honestly, I like to educate people musically, which is why if somebody asks me what I do, I always say, “I’m a folk singer,” or “I’m a country singer.” I consider all of it to be folk music, truthfully. I consider everything that’s made by people that aren’t fucking, like, ridiculously wealthy to be folk music. [laughs] And I know that’s, like, a poor dude being biased against rich people, which admittedly, I kind of am. [laughs]

So I’m curious then, how did you find punk rock?

I’m from southern Indiana. We had a rock station that back in the 80s and 90s played what we consider to be classic rock now, but they were pretty diverse. They had a radio show on Thursday nights called “Brave New World”, and it was all punk and all alternative, college rock stuff. I’m from Bloomington, which is a university town, and I grew up about six miles outside of the city in the woods, but the county seat is Bloomington, so I’m going to school there and going to shows and stuff like that. We have record stores. I was very lucky in that regard. I mean, our record store may not have carried everything, but it carried enough to give me a pretty good musical education as far as stuff outside of what was on the radio. I also have an older brother seven years older than me, and he was into punk, so that’s how I got into it. The first shows that I went to were scary. You didn’t know what was gonna happen. There was always crazy fights, and being 12 years old and seeing a circle pit and trying to get in it is pretty intense. [laughs]