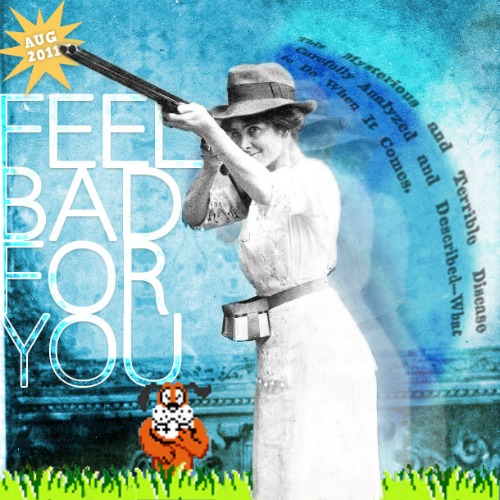 Another… uh… timely installation of the Feel Bad For You mix series is here for your enjoyment, kids. Stream, download, cheers.

Title: If I Go
Artist: The White Soots
Album: The White Soots (2010)
Submitted By: @popa2unes
Comments: Another power trio revival Rock and Roll band trips my wire, The White Soots out of Dayton, Ohio. The band formed in early 2009 with brothers Kyle(Guitar/Vocals) andKraig Byrum(Drums) and longtime friend Karl Benge(Bass) and began playing in clubs in Dayton under the name Fuzz Hound, which was changed to The White Soots after about one year of playing. They specialize in a bluesy, psychedelic mix of guitar infused rock and roll.

Title: “Little Lion Man”
Artist: Mumford and Sons
Album: Sigh No More (2010)
Submitted By: @mikeorren
Comments: In honor of all the Leo birthdays (like mine).

Title: Sick of You
Artist: Lou Reed
Album: New York (1990)
Submitted By: Brad Kelley
Comments: Matt tells me he’s not familiar with this album. This album is Lou Reed’s masterpiece, in amongst some other amazing records. Choosing one song of off it was difficult, but allowed me the opportunity to listen to the whole thing again. If you, like Matt, have this vague idea that Lou Reed is supposed to be really good but don’t know where to start, the album New York is the place to start. “The ozone layer has no ozone anymore, and you’re going to leave me for the guy next door? I’m sick of you. I’m sick of you.”

Title: Barely Losing
Artist: Richmond Fontaine
Album: Post to Wire (2004)
Submitted By: Simon
Comments: Very much looking forward to the new Richmond Fontaine album that’s due soon, so in anticipation thought I’d go with one of my favourites from them this month.

Title: Pensacola
Artist: Jolene
Album: In the Gloaming (1998)
Submitted By: Phil Norman | @philnorman
Comments: The passing of time has only made this record better and their obscurity a shame.

Title: Golden
Artist: Radio Nationals
Album: Place You Call Home (2003)
Submitted By: BoogieStudio22
Comments: A Seattle-area band that put out an EP and Full-length in the early 2000s. Just damn good rock ‘n roll with a bit of alt-country and americana tossed in.

Title: Drinking Too Much
Artist: James Leg
Album: Solitary Pleasure (2011)
Submitted By: April @ Now This Sound Is Brave
Comments: Everyone who is subject to my blabbing on Twitter or Facebook or who has run into me on turntable.fm or has talked to me longer than five minutes knew I was going to get around to submitting this song to FBFY sooner or later. This is, as they say, my jam. John Wesley Myers of Black Diamond Heavies doing his solo thing and covering the Kill Devil Hills – though the song seems tailor-made for Myers. My favorite song off of what will probably be my favorite album of 2011 when it’s all done.

Title: One More Summer
Artist: The Rainmakers
Album: Tornado (1987)
Submitted By: toomuchcountry
Comments: Its hard to believe, but a quarter-century has passed since Kansas City’s The Rainmakers debuted (not including their prior life as Steve, Bob & RIch). And its been14 years since the band went their separate ways. Late last year, however, the band re-formed (with Jeff Porter replacing Steve Phillips), released an album of all new material titled 25 On, toured Norway for several dates plus a couple of homecoming shows in KC Mizzou, and showed they can still rock. If you ever find yourself in Kansas City on a Wednesday night, be sure to visit The Record Bar where The Rainmakers’ lead singer Bob Walkenhorst and guitarist Jeff Porter have a standing gig. With this steamy, greasy summer we’re enduring, I chose this cut from the band’s second release.

Title: Diamond Way
Artist: JEFF The Brotherhood
Album: We are the Champions(2011)
Submitted By: annieTUFF
Comments: I was going to send a song that had a story to go with why I chose it…but last minute changed my mind. Just because I’ve been listening to these guys allllllllllllll day, and they kick ass. So, there.

Tagged  download, Feel Bad For You, links, mp3.
Bookmark the permalink.
Logging In...