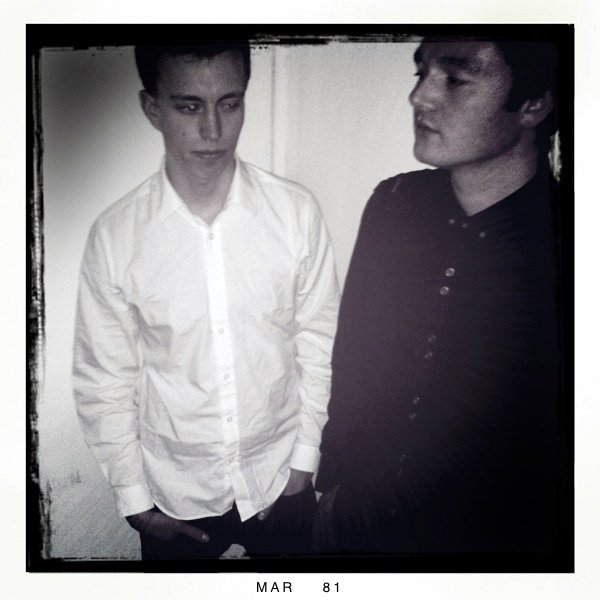 We’re aiming for a big powerful live show which we are debuting in May/June in London UK, and are releasing another couple of EPs over the course of the next few months followed by our debut album later this year.

I have a rough idea of where the West Midlands are but, to be honest, almost everything I know about the bits of England that aren’t London I learned from books like Pies and Prejudice and Cider with Roadies by Stuart Maconie, movies like Brassed Off and Billy Elliot and the week I spent in the Lake District before I went up to Glasgow for my junior year abroad. I can look at a map and see you aren’t from those part(s) of England, but: what is your England like? What propelled you down to London?

David: Well, my England was centred around Northampton when I was growing up, which is a large town in the middle of England. I was brought up in a Christian community where everyone shared all of their possessions and lived simply without a television or radio. It meant that I was encouraged to be creative from a very early age. So I’ve been writing songs and playing instruments from about the age of 7.

What brought me down to London was music. I always knew I wanted to pursue a musical career, and London seemed a good place to meet people and go to gigs etc. I also like buzzing places and being part of a city that’s always moving and always vibrant is a great place to be for inspiration.

Was your community akin to the Amish? Was London a whole lot of culture shock, or was the separation between the two types of worlds not as stark as the Amish/”English” division tends to be? (The old order Amish here generally refer to the non-Amish as “English.”)

David: The community I was brought up in has similarities, I guess, to the Amish, but only in the way everyone lives together. We all went to normal schools and interact with ‘normal’ society. They just choose to live a simple and humble life as they believe it is how God would want them to live. They call themselves Charismatic Christians. I think my upbringing has influenced me in a very positive way.

Are Raife and Glen from Northampton too? Did you call decamp to London together, or meet there? What is their England like?

Glen: I’m originally from Leicestershire, not too far from Northampton but moved to London in 1997.

David: Raife is from Northampton, and still lives there. He comes to stay with me in London every week so we can work on the band, though. Raife is the youngster of the band and we love him for his energy and enthusiasm, and also his crafty beats. I guess our collective ‘England’ is quite similar, we are all from relatively small places and have a desire to do something bigger than the confines of where we are from. That isn’t to say that we’re not proud of where we’re from, and I still really enjoy being in Northampton, it’s a great place with lots of creative people around.

Why did you name the band Strangers?

We came up with the name Strangers because firstly we thought it fitted perfectly with our sound and secondly everyone is born a stranger into this world and we really find the concept behind that idea. Also we all interact with Strangers everyday, more so than we ever have, and its a really interesting idea and can be used in loads of different ways.

You mentioned NIN as an influence; is that early NIN or later? Also, is that a violin I hear, on one of the tracks?

Yes, that is a violin in one of the tracks. Our producer is very much into ‘filmic’ sounds, by that I mean epic, huge soundscapes, and so he will often spend days coming up with a string part for one of our songs. I think it really works well for our sound. To be honest I’ve only recently got into Nine Inch Nails. I love ‘Hurt’, Closer, tracks like that. Glen is more of a hardcore fan, and he has turned me onto them.

Oh, okay, Closer and so on, that’s early NIN. Those are some of my favorites, too! Would it be appropriate to read “dark pop” as a synonym for “gothic”? Or at least as being related to certain strains of gothic music?

I guess there are gothic elements to our sound, but Dark Pop sits better with us as a way to describe our sound at the moment. Some of influences definitely have gothic roots; The Cure, Depeche Mode.

Where was the video filmed? It looks very dark and pleasantly creepy, wherever it is. Also, how long did take to do it, using just the iPhones as recording devices?

We filmed the video in Holland Park, which is a national park in West London. They are very strict about what is filmed there, so we had to stealth it a bit, and stay ‘under the radar’. It was raining for most of the filming so we were all standing there drenched, trying to get the right shots, it was an interesting day to say the least! We were there for about 3 hours the first time, and then went back for an hour or so a week later to get a few of the shots we missed. It was all shot using two iPhones, yes, and I think we were pleasantly surprised at the quality of the footage.

What was your transformative song – the rock and roll lightning strike?

David: A guy who I was in a band with a few years ago played me Depeche Mode Enjoy the Silence and it was literally love at first listen. From there I got really into The Cure and bands like that, as well as purchasing the entire Depeche Mode back catalogue.

Glen: Mine would have to be Head Like a Hole, by Nine Inch Nails, literally blew my socks off!! haha!

Raife: Everlong – Foo Fighters. The first time I heard it I wanted to be Taylor Hawkins, just such an entertaining drummer to listen to, and watch, he’s so animated. Also, it’s just a great track, I’ll never grow tired of it.

What was your first show (that you attended, not that you played)?

David: My first show i went to was a local band called Glendon. The guitarist used a food mixer on the fretboard to make some cool sounds, back then that was enough to impress me haha.

Glen: Depeche mode’s ‘Devotion Tour’ in ’93 was the first big concert I went to in London!

Raife: The very first show I went to was to see a Scottish metal band called Mendeed, I was 13 at the time. It was at the forum in Kentish Town, proper battle metal type stuff, there was mohawks and dreadlocks all over the place. Loved it. I really clearly remember just how loud it was, I couldn’t believe PA’s went that loud, pretty sure the ringing in my ears right now is because of that first show I went to.

David: I wasn’t allowed to buy tapes when I was a kid, as all other music other than Christian music was considered ‘worldly’ and wrong. I used to go round to my mates house and he would copy me stuff that was in the charts at the time.

Glen: Damn! probably Michael Jackson’s Thriller on vinyl and the last was the Inception movie score by Hans Zimmer.

Raife: Nirvana, Nevermind, the most stereotypical album to be a bought by a teenager. I listened to it over and over, really opened up my musical ears. The last one I bought was  Kanye West, My Beautiful Dark Twisted Fantasy, full of great hip-hop grooves, some really interesting instrumentation on some tracks, and a cameo perfomance from Chris      Rock at the end of the last track, couldn’t ask for more.

And finally, where will you be playing the live shows?

David: Our first show is May 20th at a new venue called Victory. We are playing this show for Club. The. Mammoth and will be the main support for FOE. Also we are playing at Bull and Gate in Kentish Town, North London for Mybandsbetterthanyours Presents on June 7th.

To hear more from the Strangers, visit them at their Website or on Soundcloud!