Jessica Lea Mayfield and the Black Keys at the Nautica Pavillion in Cleveland, OH, 7.24.10

If the quality of a Black Keys show can be judged by the number of times Dan Auerbach shouts a non-lyrical interjection into a song (think James Brown), this show was stellar.

It was an intensely hot day in Cleveland, the kind where just standing in line can make you break a sweat, but spirits and anticipation were high, and I was pleased that the show had finally sold out. The audience was decidedly split on opener Jessica Lea Mayfield, but this was not terribly surprising considering how different Mayfield’s music is from that of TBK. While it was disappointing that big brother David Mayfield was not on string duties, it was good to see JLM broadening her sound (and, one imagines, allowing David more time for his work with Cadillac Sky and his solo work) with keyboards and electric bass. And guitarist Richie Kirkpatrick is always entertaining to watch. The new song from Mayfield’s forthcoming album sounded solid, and early word is that the whole album is killer (in an interview, Dan Auerbach, who created the Polymer Sounds label in order to get Mayfield’s previous album out there, mentioned that he was trying to get the new album released on a bigger label to give Mayfield more exposure). 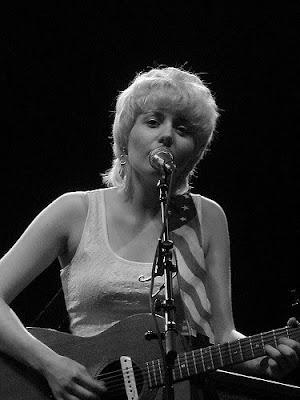 And Mayfield managed to finish her set looking just as fresh as when she started. The Black Keys, on the other hand, seemed to be sweating as soon as they started. Making a triumphant entrance to the strains of GZA’s “Liquid Swords”, TBK got right down to business with “Thickfreakness”, possibly the best show-opening song ever written with its build-up-to-an-explosion intro. 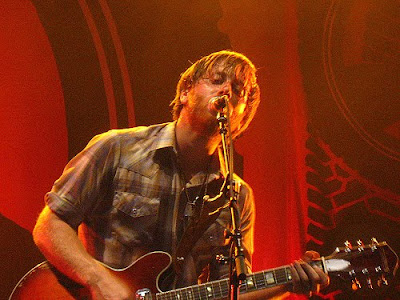 The setlist was split nearly 50/50 between Brothers and older material. They played one of their fine Junior Kimbrough covers, “Everywhere I Go”, and “Till I Get My Way” blew a few heads off. Really, it is impossible to note how balls-out shredding any one song was without mentioning how equally rocking all the other songs were. TBK are probably the most consistently high-energy, high-quality live band around. 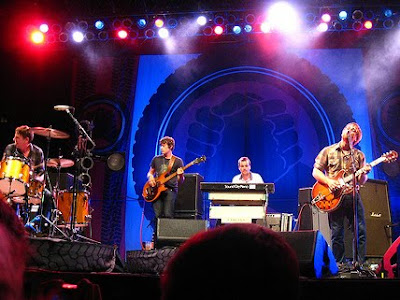 That being said, the songs off of Brothers seemed to light the audience up even more, and, in turn, fed into TBK’s energy. “She’s Long Gone” packed a magnificent punch, with “Ten Cent Pistol” making a great follow-up. Auerbach bounced behind his mic while singing out the “da da da-da”s of the “Howlin’ For You” chorus as the audience shouted along with him, fists pumping. The breaking out of “Chop and Change” (from the soundtrack of that movie the kids like so much) was an excellent surprise with Auerbach taking maraca duty very seriously (and putting out some of the best vocals of the night). Even in heat that would debilitate other people, TBK went full throttle all night and Auerbach could frequently be seen smiling as he took in the cheers and screams of the “hometown” crowd (one wonders if he might have been remembering his early days playing in bars when he would break into N.W.A. covers when the audience stopped paying attention). Between Auerbach’s wall of guitar sound and Patrick Carney’s ever-evolving drumming, if you can come away from a Black Keys show without being energized, then I don’t envy your mental landscape.