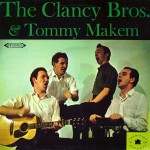 The Clancy Brothers and Tommy Makem: Because their records were the ones I neatly extracted from my parents’ collection and played as often as I could.

The Clancys came from Tipperary, Tommy Makem from Armagh, and they started creating a Irish traditional music sensation in America in the 1960s. I was lucky enough to see an incarnation of the band – there were several line-up changes over the years – in the late ’80s in DC, and I brought one of my carefully hoarded records for them to sign. (Which they did, with great ceremony, and perhaps some amusement, but definitely with courtly kindness towards a gawky not-quite teenager.) And as I remember, their voices were as sweet and true as ever.

Time has taken its toll, and as of 2009, they have all passed on. But they are still my favorite, for ever and always.

To add the Clancys and/or Mr. Makem to your own record collection, you can go Amazon and also to eMusic . The latter has Hearty & Hellish! which was the record that I probably listened to the most.

In the meantime, I hope you enjoy these videos.