A Good Read A Good Listen and A Drink: Union Sound Treaty

Union Sound Treaty are based out of Morgantown, West Virginia, and Next Year is their first record. It was released back in November 2016, and the short version of my initial reaction is: “Awwwwwwwww YEAH.”

The long version: It’s the first record for a while now that I let go on repeat because I liked the songs and wanted to hear them again so I could get a better idea of the nuances of the lyrics. Musically, it’s solid, but the pedal steel is particularly great, like a cold glass of sweet tea on a hot day.

WHile I encourage you to go to their Soundcloud and listen to the whole thing straight through – this is a record which supports such an approach, in the sense that it is cohesive, complete work, not a collections of disparate tunes all going in different directions – here are some of the highlights:

Peaked: This is a song about playing a gig that is also a fashion show, and the attendant difficulties in concentrating on the task at hand. I was tremendously amused.

Sad Country Standards: It is both an example of the genre and metacommentary upon it, which I always enjoy, in a song.

Needle Fall Down: It’s a little grim – okay, fine, it’s really grim – but – it’s beautifully, evocatively and powerfully grim. You can really feel the despair, and the sense that music helps a little bit but not quite enough, and the joy is strongly mixed with more pain.

And now I’m going to turn the floor over to the band – John Schooley (Guitar), Shawn Wilhelm (Bass Guitar), Ross Justice (Drums), Nate Colombo (Pedal Steel Guitar), Charles Wesley Godwin (Vocals & Rhythm Guitar) – all of whom are joining us today to talk about a favorite book, record and drink. 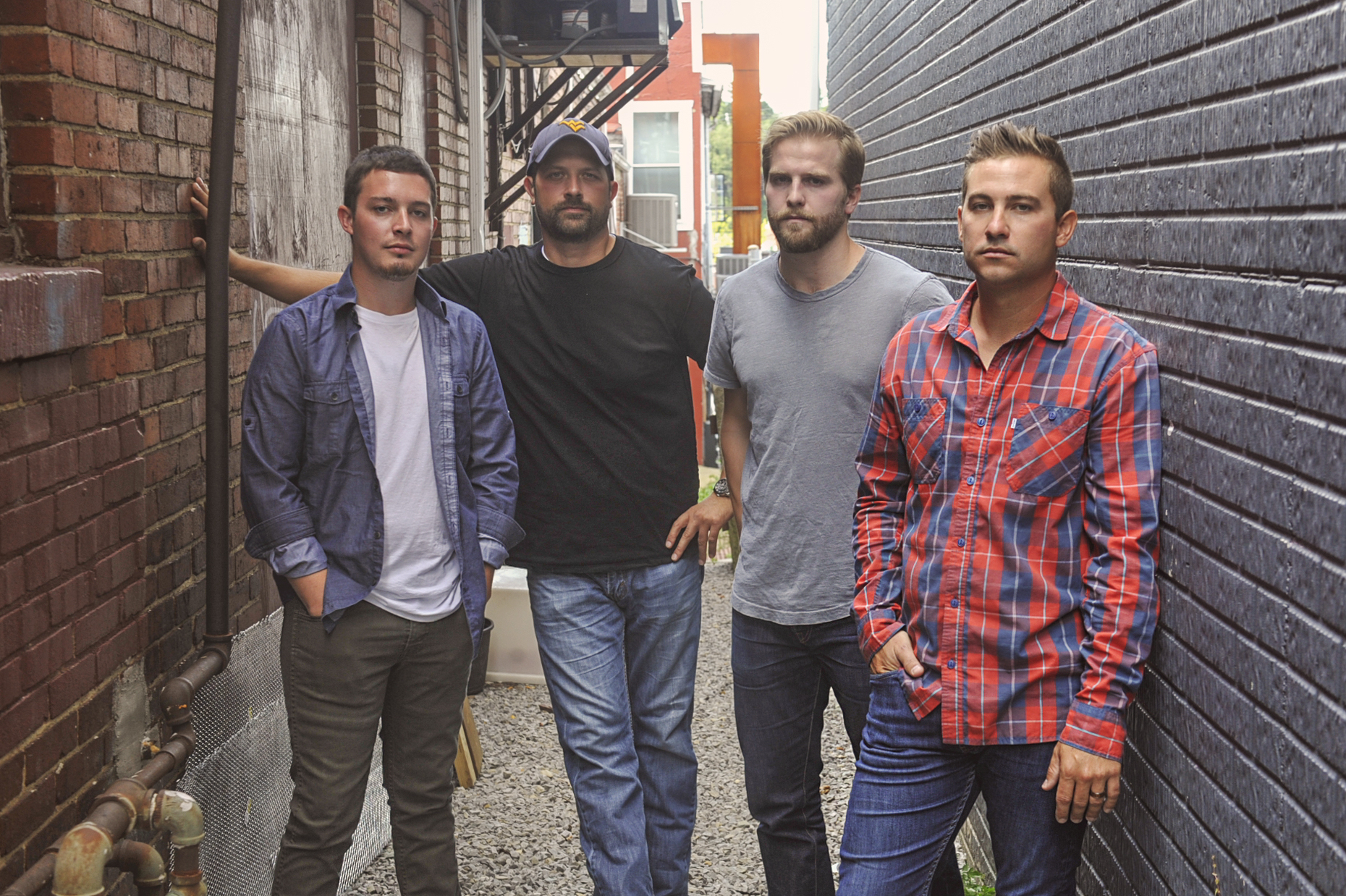 John Schooley: I’m not much of a bookworm at all but, while I was living in New York I had about 90 minutes a day to sit and read while riding the subway between Manhattan and Queens. I definitely enjoyed the stuff from Kurt Vonnegut (Breakfast of Champions & Armageddon in Retrospect) and Chuck Palahniuk (Rant: An Oral Biography of Buster Casey & Invisible Monsters).

Shawn Wilhelm: You Can You Will: 8 Undeniable Qualities of a Winner, Joel Osteen. This isn’t necessarily my favorite book but it helped me not too long ago. It’s a good motivational read. I had planned on starting my own business, but I was unsure about leaving my former job. Every time I set an exit date I would chicken out and drag my feet. A friend of mine in the music business told me about this book. It definitely gave me the confidence boost I needed and helped me move forward.

Ross Justice: Admittedly, I’m not the biggest reader in the world, but I do collect old history books, in particular ones that cover West Virginia history and politics.

Nate Colombo: Earl Scruggs and the 5 String Banjo. While not technically a novel or anything, it’s hard to think of a piece of media, book or otherwise, that has had as dramatic an influence over my life as Earl Scruggs and the 5 String Banjo. The story on how I started playing music is longer than this write up allows for, but I started my musical life as a banjo player. Any beginning player will tell you that this book is the banjo player’s Bible.

Every note Earl ever picked has been meticulously recorded and transcribed into to the book in a way that allows even the most novice of players to understand and master. So having said that, I’m not exaggerating by saying, I wouldn’t be where I am today if it weren’t for this book and its contents.

Charles Wesley Godwin: The Lion, The Witch and The Wardrobe. My Mom got this book for me in either first grade or second grade. I became obsessed with it until I finished it (and the rest of the series). I attribute this book for making me a “reader” for life.

JS: A Good Listen for me is Blast Tyrant from Clutch. I’m a Riff-Rock type of guy and these guys nail it, big fan of this group. From front to back the album delivers heavy, groovy, riff-oriented rock & roll.

SW: Dreaming My Dreams, Waylon Jennings. My Grandfather is my biggest musical influence. He sang and played guitar, bass, piano, mandolin and banjo. In middle school I developed an interest in music, he began teaching me the basics of guitar and bass.

Along with instruments, he Introduced me to classic country music and bluegrass. We would spend entire weekends in the summer picking and listening to Waylon, Willie, Hank Williams and Gene Autrey. This album was a staple in our “set list.” Nearly every song on this album could have been a single. This was Waylon Jennings’ first album in which he was given complete control from RCA records. You can tell. Nothing sounds forced, and every song seems to blend perfectly. The simple melodies and warm bass lines are perfect. In my opinion, it’s one of the best country albums of all time.

Are You Sure Hank Done It This Way (Remastered)

RJ: One of my favorite albums to relax to is Before These Crowded Streets by Dave Matthews Band. Carter Beauford is a “drum idol” of mine, and I love the arrangement of that album.

NC: Whiskeytown, Stranger’s Almanac. I picked this album because it always gets heavy play in my car this time of year. Stranger’s Almanac is my go to answer when someone asks me to recommend an alt-country album. In my personal opinion, it’s one of the few albums that I feel are a near perfect 10/10 from start to finish.

The reason it gets such heavy play this time of year is its strong vibe of “back in your home town.” Maybe it’s the power of persuasion from songs with titles such as Inn Town, but when I’m back home for Christmas (like I am now), Stranger’s Almanac is always the soundtrack to meeting up with friends out at our favorite bars, staying out drinking beer all night, or sitting around a fire catching up.

So as I write this, Stranger’s Almanac is my “top of mind” answer. Additionally, and with more connection to the music we play, the pedal steel solo for Excuse Me While I Break My Own Heart is probably the first time I fell in love with the idea of playing steel guitar. Most steel players cite guys like Buddy Emmons or Paul Franklin as their primary steel influences, and don’t get me wrong, those guys are gods behind the steel, but “Excuse Me While I Break My Own Heart” was the first time I had heard the steel utilized in a format that wasn’t expressly classic country. It’s really the only song on that album that has a strong steel guitar presence.

What had an impact on me was the steel guitar’s ability to influence the overall sound of the track. It took what would have been a traditional rock and roll sound (guitar, drums, and bass) and gave it a distinct country flavor. Adding that small instrumentation to the song makes the listener say, “this is a country song.” That’s what drew me to the steel guitar. Being able to introduce that type of influence is really attractive to me. So ultimately, that’s a song that helped me make the decision to dive into playing the steel guitar.

Excuse Me While I Break My Own Heart Tonight

CWG: Little Victories by Chris Knight. It’s been a long year. A struggle. Hard times. Chris’ songs spoke to me in this one. I’m grateful for them.

Chris Knight - In The Mean Time

JS: I don’t start the day without coffee (two cream one sugar) and I have to agree with Nate’s endorsement of Yuengling. That’s one of my favorites.

SW: Big Wave, Kona Brewery. I discovered this beer while living in Hawaii. Fresh out of college I was used to party beers (Bud Light, Natty Light etc.) This was the first full flavored beer that I fell in love with. For the longest time you could only enjoy it in Hawaii and on the West coast, but in the last two years it has popped up everywhere. Do yourself a favor and twist open one of these sweethearts, you will be dancing the hula in no time.

RJ: I definitely couldn’t get through the day (or morning for that matter) without black coffee. As appears to be a band trend, I’m also big on Yuengling, Lagunitas IPA, and West Virginia brewed Halleck Pale Ale from Chestnut Brew Works.

NC: Yuengling. Not much to say here other than I think everyone else in UST would agree that this is the official drink of the band. Never gets old to me. Haven’t played a show where Yuengling wasn’t involved in some capacity or another. So Yuengling, if you’re reading this, we’ve been looking for a beer sponsor.

CWG: Chamomile honey tea. This gets me through weeks that I have 5+ shows. Without it I would lose my voice a lot.