A Good Read A Good Listen and A Good Drink: Martin Macphail, Blitz//Berlin

Blitz//Berlin, collectively of Toronto, Canada, who last appeared in these pages in late 2013, have just released a video for their new song Jesus Shoes from their upcoming record Distance.

It is Halloween-themed in the sense that there are people wearing masks and there is some super weird business going on.

It is beautifully shot and atmospherically lit – truly capturing the bruised look of the world in late fall in northern latitudes – but it’s not . . . it’s not festive, and I mean that in the best possible way.

I watched it and thought about monsters, and community, and that sometimes loving a monster means being the one to put that monster down. Which might be heavy freight for a tiny video, but – I think it can carry the weight.

When not rocking out, they also make movie soundtracks; their most recent effort was for Extraterrestrial:

And on that note, I will turn the floor over to Martin Macphail, lead singer, who joins us today to tell us about a favorite book, record and drink. 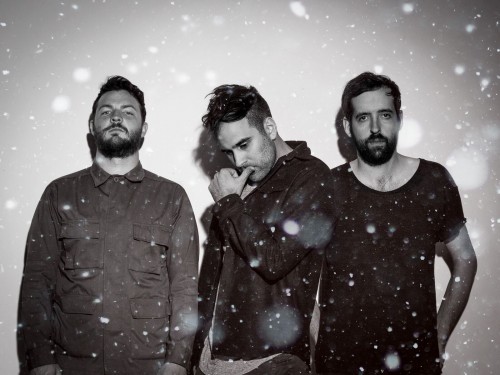 Neuromancer. Good is a weak word for how super-duper-good this book is. I’m sure most have read it by this point, and for me it’s a touchstone, not just for science fiction, but for sheer imagination and world-building in any genre. Although the world of Neuromancer feels familiar, having inspired countless books and films (not to mention an entire genre), very few works can compose a vivid, lush, and imperfect atmosphere the way Gibson conjures Night City, The Sprawl, or The Villa Straylight.

From the very first (and very famous) sentence “The sky above the port was the color of television, tuned to a dead channel” Gibson paints a terrifying future with such confidence and poetry, he makes the styrofoam sea, fluorescent sky, and drug addicted burn-out main character feel incredibly real and exciting.

Aside from his aesthetic brilliance, Gibson’s thoughtful exploration of artificial intelligence, and the ways he ultimately defines consciousness and cognition i think are pure genius. If you can’t tell, i really really love this book. In fact after writing this, I’m going to start re-reading it.

Spaces by Nils Frahm. As a vocalist, I’ve recently discovered that I really dig instrumental music. This year I’ve mostly listened to film score and various instrumental albums, which i find so inspiring. Nils Frahm for me is one of those special artists whose music feels like like a warm massage for my brain.

I tried to tell him this once, before a show in Toronto – actually this is a funny story, time for a quick detour. Nils played at The Drake last year, and I bumped into him at the bar upstairs before his set. I don’t get starstruck often, but German pianists really do it for me? Anyways, I got up the nerve to approach him, which involved me uttering a long run-on sentence where I complimented him awkwardly, humble bragged about some film score work (CRINGE), and then tried to ask him a question – if he would ever consider composing for film. The whole time he stared at me like he was ready to slap me.

He then said something like “Absolutely not.” which sounds scary in a German accent. Then for some reason I brought up that the film I had just worked on was being mixed, and how I liked handing the mix off to a pro who I trusted, to get some fresh ears on it. To this he said “Agree to disagree. I would never allow someone else to mix my music.” Shortly after that he walked away, and then played an amazing set of music later that night. He’s also now scored a film, and other people have mixed his records . . . so I guess he was just in a mood? In retrospect, that’s exactly who I wanted Nils Frahm to be – a phenomenally talented maestro who has no time for Canadian fools like me.

Back to the album, I love listening to Spaces while reading or driving (never at the same time FYI). I’m sure Nils would hate the concept of me haphazardly pairing his music with other mediums, but you know what Nils, you’re not the boss of me. Or are you? I’m not sure.

The best moment during this Neuromancer / Nils pairing is in the track For – Peter – Toilet Brushes – More, where these long beautiful ebbs of analogue synth wash over you like sizzling incandescent waves. This movement goes so well with literally any part of Neuromancer, and in certain moments it especially elevates the reading experience.

My beverage of choice for reading or writing or listening is always Wild Turkey bourbon. I know, I know. But I love it. Wine makes me too foggy, beer too sleepy, and other hard liquor I just get distracted. Wild Turkey (on the rocks) for some reason, just helps sink right into a vibe. Little factoid – the fourth track on our album is called 81, because it’s named after Wild Turkey . . . because it practically wrote the album.

In closing, I think I’ve actually combined these things enough times that that I’m facing a somewhat Costanza-esque scenario where each of these ingredients makes me crave the other one.

Tagged  A Good Read a Good Listen and a Good Drink, Blitz//Berlin, Martin Macphail.
Bookmark the permalink.
Logging In...