A Good Read A Good Listen and a Good Drink: Bob Morris, The Hush Sound 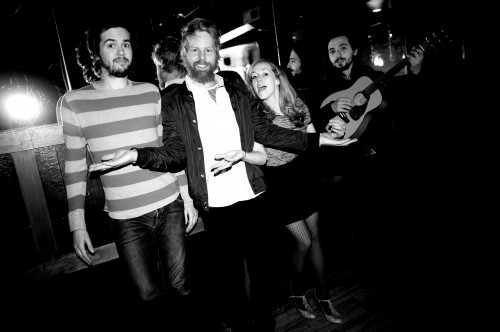 In 2009, after three records and a lot of touring, The Hush Sound decided to take a break. That break lasted until 2013, when they reconvened to make more of their unique and delightful mix of power pop, folk and rock. As an example, here are two of their most recent tunes, Not A Stranger and Scavengers:


And now, here is Bob Morris (center, above; guitar/vocals) to tell us about a favorite book, record, and drink:

A Good Book
One of my favorite books is JITTERBUG PERFUME by Tom Robbins. It has many story lines that weave together and by the end they, of course, collide. My favorite story line in the book is that of Alobar, a ruler of a small tribe from prehistoric times. Alobar’s tribe doesn’t fear death, it’s a part of life. When you start to show your age, you are sacrificed and the next strong and able man takes over. Alobar, however, plucks his grays and when he is found out, he escapes. He meets the love of his long life and they meet some monks that teach them to live forever, through meditation. It’s an epic saga. It’s a beautiful love story and it weaves together ancient times with today.

A Good Listen
While I would argue that Stevie Wonder is the greatest music to listen to in virtually any situation, contextually, I think Marvin Gaye‘s What’s Goin’ On album is my favorite of all time. It was released in the late 60s on Motown and is the most ambitious of all Funk Brother’s arrangements. The themes of peace and forgiveness are both beautiful and empowering to any peaceful warrior. It’s an album that I can always listen to.


A Good Drink
Intelligentsia coffee, man. Why are you saving ten bucks buying Trader Joe’s coffee when you could be living the high life with the good stuff. Just stop. You’re doing it wrong.

Tagged  A Good Read a Good Listen and a Good Drink, Bob Morris, The Hush Sound.
Bookmark the permalink.
Logging In...