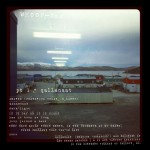 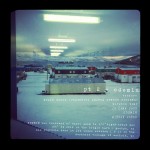 Qallunaat/Odemin, the latest from WHOOP-Szo (this incarnation: Adam Sturgeon, Kirsten Palm, Gnathan and Starr Campagnaro), is a double album, recorded mostly in the village of Salluit, in the Québécois part of the Canadian Arctic, while Sturgeon and Palm were running a screen-printing program with Inuit youth.

The songs are, collectively, an odd but dazzling musical kaleidoscope. Here, you hold it, I’ll spin the wheel for you:

Amaruq (feat. Larry T) is the first song on Qallunaat, and is a low-fi pop song.


They’ve built their nests, in the chimneys of my heart; those swallows that you’ve lost is both the title and an appropriate summary of this delicate, sweet little song, also from Qallunaat:


Kirsten Time is the second song on Odemin and it is an eccentric, dreamy ambient delight limned with the perfect amount of distortion and fuzz.


And finally, Mirror North, the last song on Odemin which starts out – not boring, certainly, but – like the soothing routine of necessary tasks done against the background of snowscape – and ends in the unexpected cracking of the pack ice.


For the rest, stop by their bandcamp page.