Time again for the groovin’ internet sensation that all the hip kiddies are talking about, the Feel Bad for You mixtape!

“Hello my little red-nosed reindeers! It’s the last Feel Bad for You mixtape of 2012! And good riddance 2012, and don’t let the door hit you in the ass on the way out. Please welcome The Mad Mackerel from Charlbury, England, as our newest contributor! (FYI: If you accidentally Google “The Mackerel” instead of “The Mad Mackerel,” the top hit is a disturbing Picasso painting.) Thanks to TooMuchCountry for the artwork. Although, after tonight’s game, maybe we should Feel Bad For the Texans.” 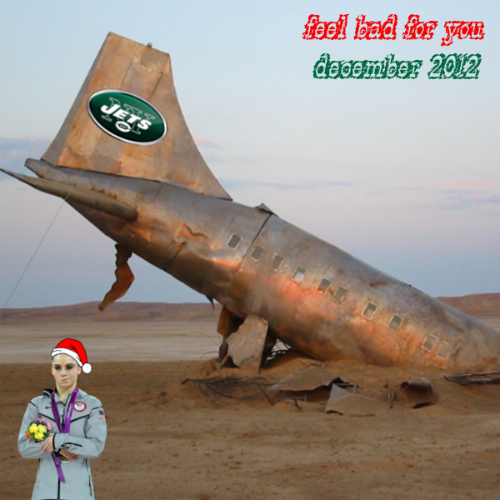 1. Title: The Money Goes
Artist: The Reverend Peyton’s Big Damn Band
Album (year): Between The Ditches (2012)
Submitted By: hoosier buddy
Comments: I saw this band at the 8×10 in Baltimore. It was a transformative experience, standing in the middle of a crowd of screaming, stomping, whiskey-fueled, wild-eyed music fans. The Reverend, who hails from Brown County, IN, could teach Jack White a few things about playing guitar…and about performing. I’m completely serious. Catch ‘em if you can.

2. Title: Molotovs
Artist: Dorado
Album (year): Anger, Hunger, Love And The Fear Of Death (2013)
Submitted by: Corey Flegel
Comments: This is a side project by Birmingham badasses Through The Sparks. The Dorado full length will be released 1/5/13 via This Is American Music.

4. Title: Stupa
Artist: District Attorneys
Album (year): Jr. (2012)
Submitted By: TheOtherBrit
Comments: These guys have my favorite album of the year but this is off their just released free EP from thisisamericanmusic.com!

5. Title: Endeavor
Artist: Timo Räisänen
Album (year): Endeavor (2012)
Submitted By: @philnorman
Comments: Fizz bop Swedish pop! A friend posted this on the tweeters a week or two ago and the damn hook won’t get out of my head. Bonus saxophone solo!

6. Title: Get Me In A Room
Artist: Hallelujah the Hills
Album (year): No One Know What Happens Next (2012)
Submitted by: Simon
Comments: Thanks to everyone who’s contributed and given their time to creating the posts and artwork, so much music, so little time – you filter the great from the mediocre. This is an ear-worm of a track and the video features our erstwhile collator and editor-in-chief Amy https://vimeo.com/38678429.

7. Title: The Cigarette Song
Artist: The Patinettes
Album (year): Bliss (2011)
Submitted By: @popa2unes
Comments: I’m sure like me, this monthly exercise always gets you rooting deep into all the music you’ve accumulated and saying Oh yeah haven’t heard this album in a while! The Patinettes only album Bliss is filled with retro surf rock flair, beautiful vocals and a catchy bluegrass/country vibe and it just found it’s way back onto my pod. They are a five piece crew from Zaragoza, Spain.

8. Title: In Pacific Time
Artist: Micah Schnabel
Album (year): How to Quit Smoking/In Pacific Time CDR (2012)
Submitted By: scratchedsoul
Comments: I travel a lot for work which can be shitty sometimes and sometimes it’s great. At the end of the summer I found myself in Buffalo for work and went and saw Two Cow Garage open for Lucero. Micah and Shane were selling their wares after the show and this is from a CDR Micah was selling. Both songs are ridiculously good.

9. Title: Little Mystery
Artist: Todd Thibaud
Album: Little Mystery (1999)
Submitted By: toomuchcountry
Comments: Thibaud was one of the early artists introduced to me by the randomness of Pandora. Not terribly edgy – yet this Boston singer has some solid, creative pop tunes. I revisited Little Mystery for FBFY and realized the multiple meanings of that song title this time of year. The song itself tells the story of the girl about town who craves the return of a little mystery in her life – but who is resigned to know it ain’t happenin’. But don’t we all crave the return of a little mystery? Hell, is mystery even possible in a world of Facebook, Twitter and iPhones? Whacked relationships. Gender-known deliveries. Loathed gift cards vs. wrapped presents bought with intent and a smile. The mystery of Santa that recedes with each generation more quickly than any glacier melts. Those damn Mayans. The journey to Bethlehem and the everlasting impact of the events that may have happened there. But hey, Merry Friggin’ Christmas y’all. Thanks for listening, downloading, sharing and/or ignoring my submissions this year. Have a drink on me, kiss the ones you love and pray for the ones you don’t.

10. Title: To Sir With Love
Artists: Lulu
Album (year): To Sir With Love (1967)
Submitted By: Rockstar Aimz
Comments: I’ve been listening to Steve Earle’s SiriusXM radio show, and he recently discussed the work of producer Mickie Most. This track stands out among his many, many great recordings.

11. Title: I Wanna Live
Artist: The Ramones
Album (year): This version is from the “Hey! Ho! Let’s Go: The Anthology [Disc 2]” (1999) but it’s originally on “Halfway to Sanity” (1987)
Submitted By: annieTUFF
Comments: I’ve been on an 80′s Ramones kick in between surf music and crazy Christmas music…so…here ya go.

12. Title: Keep the Boy Alive
Artist: Sebadoh
Album (year): Secret EP (2012)
Submitted By: Ryan (verbow over at altcountrytab.ca)
Comments: I guess the successful Dino Jr reunion has inspired Lou Barlow to revive Sebadoh. They snuck this EP out earlier this year, a teaser for a forthcoming full album in 2013. This is the first song off that EP – and I love the hell out of it. I’ve always dug Lou’s stuff – I wish I had a bunch of enlightening things to say about it, but I don’t. Its just a base instinct I guess. Viva la Sebadoh!

13. Title: God Damned the Rain to Fall
Artist: Horsehead
Album (year): Sympathetic Vibrations (2012)
Submitted By: Trailer
Comments: If you’re gonna do an impression of The Black Crowes, you might as well do it this damn good.

14. Title: Black Tar Carpet Ride
Artist: The Lollipops
Album (2012): Pop Narcotics (2012)
Submitted By: The Mad Mackerel
Comments: “We’ll shoot some heroin, and take to the skies.” Told over a simple acoustic strum, this is an unapologetic, woozy, hypnotically brilliant paean to the delights of chasing the dragon. The best addition to the Sex and Drugs and Rock’n’Roll mantra we’ve heard all year. The only apology? For “the times we almost died.” It comes from The Lollipops sublime May release, Pop Narcotics – available as a Pay What You Want deal from their Bandcamp page.

15. Title: Blood, Sweat & Murder
Artist: Scott H. Biram
Album (year): The Dirty Old One Man Band (2005)
Submitted By: Bryan Childs (ninebullets)
Comments: My father was a HUGE Scotty Biram fan. I’m glad he got to see him live before he got sick. This was one of my dad’s favorite SHB songs.

17. Title: Letters Home From the Garden of Stone
Artist: Everlast
Album (year): Love, War, and the Ghost of Whitey Ford (2008)
Submitted By: tincanman
Comments: A soldier ponders his place in the battlefield. Masterfully crafted lyrics and production. And that voice is so seductive!

18. Title: Dead Souls
Artist: Joy Division
Album (year): live (1980)
Submitted By: April @ Now This Sound Is Brave
Comments: This is from a show Joy Division played at the University of London Union on February 8, 1980, recently remastered by audio engineer Drew Crumbaugh. I’ve been listening to Joy Division since I was in my early teens, and everytime I listen to them, I still think it is some of the greatest music I’ve ever heard.