It’s Fifty Shades of Come Make Fun of Us for What We Listen to When No One Is Looking for FBFY this month. I tried to save a little face with my entry.

“Embarrassed by some of the music that you love? October is for you! Honestly, I was expecting more bad country music submissions for this month, but we got a nice variety. And by nice I mean embarrassing. Your favorite bloggers, twitters, self-important a-holes on the internet, and other jokesters present 50 Shades of Feel Bad for You: Guilty Pleasures Edition. Thanks to @philnorman for the killer cover art.” 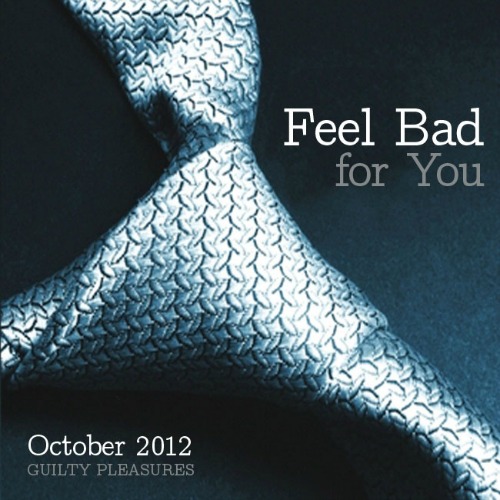 1. Title: Killer Whale
Artist: Underground Resistance
Album (year): 1992
Submitted By: Slowcoustic
Comments: I don’t want to say this is a “guilty pleasure” as much as it is a genre that most folks are surprised that I really really love (once and awhile). Early Detroit Techno. The “techno” today tends to be a bit too shiny for me and I am just too far removed from any sort of scene now to get the good stuff I guess. So, like every other aging dude who used to like metal or techno while growing up – I will always enjoy the classics as a guilty pleasure. I am pretty sure I owned the white label vinyl for this track back in the day – sold from a DJ from the trunk of his car…obviously…

2. Title: Planet Earth
Artist: Duran Duran
Album: Greatest Hits (1998)
Submitted by: Simon
Comments: Time to confess I guess, I’m a bit of music snob, sometimes I may voice an opinion on my good ladies choice of music, most times my comments are frowned upon or brushed off with more than a little disdain, in truth I’m lucky I don’t get a punch in the nose for my generally scurrilous commentary, in my defense I am often tortured by Absolute 80′s on the radio and Now That’s What I Call Music Volumes 1 to 6 on the stereo, so my choice is a real guilty pleasure – hopefully I’ll get away with it….

4. Title: I’m Raving
Artist: Scooter
Album (year): Wicked! (1996)
Submitted By: tincanman
Comments: I know this is a sacrilege, so no need to rub my nose in it

. Scooter’s fast tempos and happy melodies are infectious and this is one of their signature covers. You just gotta get over being a big ole stick in the mud to enjoy it.

5. Title: Que Veux-Tu
Artist: Yelle
Album (year): 2011
Submitted By: @scratchedsoul
Comments: I have no idea what this song is about as my French isn’t that strong. I just hope they’re not singing about fascist topics. Listening to dance/pop songs in a foreign language is much easier because you don’t have the insipidness of the lyrics distracting you from the catchiness of the song.

6. Title: The Background
Artist: Third Eye Blind
Album (year): Third Eye Blind (1997)
Submitted By: Trailer
Comments: This whole album is a guilty pleasure for me, full of ridiculously catchy pop-alt-rock, but it’s this tearjerker about a hospital-bound ex-lover that always gets me.

8. Title: Extraordinary
Artist: Liz Phair
Album (year): Liz Phair (2003)
Submitted By: hoosier buddy
Comments: I’m a process guy, so I started with a list of about twenty “possible” artists, then chose three representative songs from each artist to review. I rejected Lily Allen (too obvious), Delerium (pointless), and ¡Bowling for Soup! before landing on this rough gem from Liz Phair. I am a Phair fan, and I respect her songwriting abilities. She’s made some important contributions to pop music, including Exile in Guyville. But I digress…

“Extraordinary” was manufactured to be like the girl all the bad guys want. But even made up like a teen beauty pageant contestant by über-pop producers The Matrix, this pop-rocket failed in its mission to penetrate the chart stratosphere. It landed with a critical thud. But, as a guilty pleasure, it delivers in spades on both counts. Listen to that industrial-strength garbage can guitar tone, the Johnny-Barbata-drum-school dropout drumming, the Nutrasweet-cum-Chipmunks backing vocals, and you know this is the one you want to take home from the dance. Phair sings these cringe-worthy lyrics lustily, and you can hear the self-image crisis (average every day sane psycho supergoddess) within the this-is-almost-a-relationship crisis within the what-are-the-chances-of-getting-radio-airplay crisis – the Russian dolls of pop angst! This is what a plaisir coupable should be: more pleasure than guilt.

9. Title: Joyride
Artist: Roxette
Album (year): Joyride (1991)
Submitted By: Ryan (Verbow @ altcountrytab.ca)
Comments: When I think guilty pleasures, I think of bands/songs that you would be completely horrified to have your friends find out about. What better guilty pleasure, then, than an early 90′s crap pop song from a Swedish crap pop powerhouse? Ladies and gentleman – “Joyride” by Roxette. I want to hate myself for liking this song, but I can’t. I will sing it at the top of my lungs any time I hear it, unless I happen to be within 100 feet of another actual human being who may hear me and judge me for my forbidden love. I’m so sorry for this.

10. Title: Toxic
Artist: Nickel Creek (covering Britney Spears)
Album (year): live (2005?)
Submitted By: April @ Now This Sound Is Brave
Comments: This tune is such a guilty pleasure for me that I can’t even bring myself to submit the original, so I’m hoping to preserve a modicum of respect with this Nickel Creek cover, serendipitously recorded at the House of Blues (blech) in Cleveland (yay). I’ve never been fond of Spears’ work, but the unique instrumentation and the abjectly sexual vibe of this song hit me in an irresistible spot.

11. Title: I Believe In a Thing Called Love
Artist: The Darkness
Album (year): Permission to Land (2003)
Submitted By: @philnorman
Comments: I love the complete campy perfection of this song, from the falsetto hook to the hair band homage video complete with Ghostbusters photon streams shooting from the guitars. My life as the singer in a party cover band will be complete when we do this song.

12. Title: Shakin’
Artist: Eddie Money
Album (Year): the 80′s
Submitted By: Truersound
Comments: I really struggled with this submission, normally my go to for “guilty pleasure” is Alabama, but those guys are like classic country now I suppose. There were others I considered but did not really feel guilty about enjoying (such as The Eagles), many nostalgia and irony laced acts and then there were many that I enjoy when I hear them on the radio or in a store (such as I Saw The Sign or You Belong To Me) but I don’t actively seek out to listen to. That led me to this, of which I have an Eddie Money greatest hits tape in the car and I genuinely dig. I only feel partially guilty though, and that’s only because I also once enjoyed a scene on King Of Queens featuring this song. For the record Eddie Money’s best song is “Gimme Some Water,” but I have zero guilt about that one.

13. Title: Hit the Switch
Artist: Bright Eyes
Album (Year): Digital Ash in a Digital Urn
Submitted By: Rockstar Aimz
Comments: I am completely embarrassed to admit that I like Bright Eyes. Go ahead. Judge. I can take it.

14. Title: Dirty Song
Artist: Cars Can Be Blue
Album (year): All The Stuff We Do (2005)
Submitted By: annieTUFF
Comments: This was a hard decision for me! Uh, don’t listen to this song with any kids around.

16. Title: Second Chance
Artist: .38 Special
Album (1988): Rock & Roll Strategy
Submitted by: TheSecondSingle/Beldo
Comments: This was tough for me. There were a lot of songs I considered: “Love In The First Degree” by Alabama, “No One Is To Blame” by Howard Jones, “Live To Tell” by Madonna. Anyone who knows me even a little bit knows I have a soft spot for guilty pleasures. Sometimes the guilty pleasures override the respectable pleasures, but I digress….38 Special released what is easily one of the wussiest monster ballads of the ’80s and definitely the wussiest song by a band named after a gun, but you know what? I don’t care. Cause this song rules. It has kick ass harmonies and a killer chorus. It also sounds nothing like the shit kickers who recorded “Caught Up In You.” It sounds like Richard Marx. I also recommend checking out the video for the director’s hilarious attempt to try and make a bunch of mulletted Florida rednecks look sensitive by filming their mullets in black & white: http://www.youtube.com/watch?v=cRkaPdfjzEk