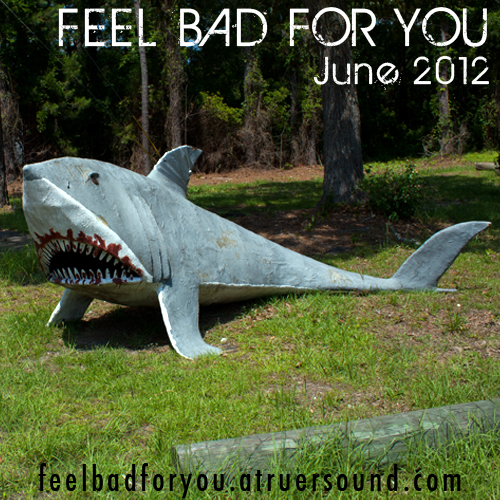 The Feel Bad For You mix for June is here, babies. The FBFY corral of hard-working (just humor us) music bloggers, twitterers, avid listeners, and people pulled off the street have come together again to bring you aural pleasure. Pick it up. (For more information about the contributors – or to comment – check the FBFY site.)

1. Track: Blondie and Dagwood
Artist: Adam Carroll
Album: Lookin’ Out The Screen Door (2000)
Submitted by: toomuchcountry
Comments: This one is for all you June brides and grooms who want your new marriages to last. My suggestion is to put down that copy of 50 Shades of Gray and listen closely to Carroll’s lyrics of romance based on the couple from a comic strip legend.

4.Title: “45″
Artist: The Gaslight Anthem
Album (year): Handwritten (2012)
Submitted By: Gorrck
Comments: Single released in advance of the album. Thinking about actually getting the 45 on vinyl.

7. Title: I Just Want You To Go Away
Artist: The Lovely Bad Things
Album (year): New Ghost/Old Waves (2012)
Submitted By: annieTUFF
Comments: I just heard of this band a couple of months ago, so I’m still trying them on for size. But sometimes the best love song is an anti-love song.

8. Title: Yesterday (Circa Summer 80 Something)
Artist: Cory Branan
Album (year): 2012
Submitted By: TheOtherBrit
Comments: Cory finally got this album out and this ode to John Cougar is the perfect way to kick off summer.

9. Title: Chain Chain Chain
Artist: Red Red Meat
Album (year): Bunny Gets Paid (1995)
Submitted By: Ryan (Verbow @ Altcountrytab.ca)
Comments: I’m constantly surprised at the numbers of bands I missed out on in the 90′s. Red Red Meat were straight outta Chicago, even touring with Smashing Pumpkins – yet I’m only just now finding out about them thanks to Tim Rutili’s current band (Califone). This is off of their recently reissued Sub Pop masterpiece Bunny Gets Paid – damn fine song if you ask me. Crank it.

11. Title: Ready For The Axe To Drop
Artist: TV Smith
Album (year): Useless – The Very Best of TV Smith
Submitted By: Simon
Comments: The only redeeming feature of this weeks Jubilee celebrations for me has been the various media articles and TV programming on the BBC revisiting punk, not that it ever really went away – which brings me to this months song choice from a guy who’s continued to record solo and in various collaborations after the punk band he fronted split in 1979, prompted by one of the aforementioned BBC Rock-docs here’s a track from the The Adverts front man TV Smith http://www.tvsmith.com/

12. Title: Alone In Memphis
Artist: Austin Lucas w/Glossary
Album (year): none
Submitted By: Bryan Childs (ninebullets.net)
Comments: This, I assume, will be on Austin’s next album.

13. Title: Everything You Took
Artist: Lee Bains III & The Glory Fires
Album (year): There is a Bomb in Gilead (2012)
Submitted By: @philnorman

17. Title: Creakin’ Ol’ Bones
Artist: Michael Dean Damron
Album (year): Nah Death, Im’a Comin’ For You (2012)
Submitted By: Romeo Sid Vicious
Comments: Mike D. has been getting me through a lot as of late and this track is the one I queue up the most at the moment.

21. Title: Sweetness
Artist: Micah P Hinson
Album: … And The Pioneer Saboteurs (2010)
Submitted by: Lord Summerisle
Comments: I am baffled as to why this man is not huge. Probably my favourite artist of the last 10 years in terms of consistency. Every album is great.

22. Title: The Devil Ain’t Lazy
Artist: Bob Wills and his Texas Playboys
Album: single (1948)
Submitted By: April @ Now This Sound Is Brave
Comments: I get a kick out of the fact that this song is essentially praising Satan’s work ethic. And, of course, since it’s Bob Wills, it swings. The mellow-voiced Tommy Duncan provides the vocals.

Tagged  download, Feel Bad For You, mix, mp3.
Bookmark the permalink.
Logging In...