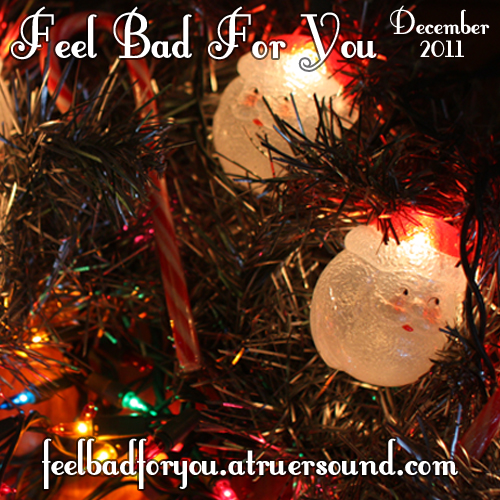 With my lack of posting lately, it’s hardly my place to give anyone else shit, but now that Truersound Matt has finally gotten off his ass, I can present you with this month’s FBFY mix, compiled by bloggers, tweeters, music makers and music lovers and powered by love. And hate. And liberal doses of alcohol and caffeine. And possibly narcotics. And electricity. Stream or download below.

Title: This Ship Was Built To Last
Artist: The Duke Spirit
Album: Neptune
Year: 2008
Submitted By: Shooter
Comments: Why don’t you go over there and blow me and come back over here and fuck you

Title: Zane Merite
Artist: Mudlow
Album: Zane Merite
Year: 2006
Submitted By: April @ Now This Sound Is Brave
Comments: I knew what Mudlow looked like (thanks to this photo set on Flickr) a few years before I knew what they sounded like (which seems fair enough since Mudlow takes their time between albums). And what they sound like is the noir soundtrack of my (rougher, dustier) dreams. This song will make a reappearance on their next, just-finished album, so think of it as an early preview.

Title: Impermanent Things
Artist: Peter Himmelman
Album: Mission Of My Soul: The Best of Peter Himmelman
Year: 2005
Submitted By: toomuchcountry
Comments: My knee-jerk reaction was to offer Ray LaMontagne’s “Beg, Steal or Borrow” as a Dirty Santa submission for this month’s compilation. However, I’m a sucker for Christmas. I want to believe – I have to believe – that there is still a shred of relevance to it. Even if the time and events surrounding it have been bastardized by black days, cyber weeks, thoughtless gift cards, hair-graying stress over time at “your folks or mine this year?”, apathetic efforts in helping the truly needy, gluttony, etc., there is still something magical about The Day. Being Jewish, Himmelman clearly didn’t write this song about Christmas. Nonetheless, I think its a good kick-in-the-gut reminder where my priorities need to be -and where they shouldn’t. Thus endeth the soapbox. Enjoy the track. And thanks to those who sampled, listened, downloaded, commented, and ignored my submissions this year – and to FBFY overall. See ya in 12.

Title: Up the Junction
Artist: Chris Difford
Album: Uncut Sept 2006
Year: 2006
Submitted By: Simon
Comments: Had this track stuck in my head for a few days now, like this version with a little bit of steel.

Title: This Town
Artist: Don Ryan
Album: Tangle Town
Year: 2011
Submitted By: @popa2unes
Comments: Staying in my own backyard again this month, Don Ryan is from Hawthorne NJ. The 18 song album is available on his bandcamp page, name your price. fantastic witty dark lyrics and multi influenced music mixed together by a mad scientist. “As defeat licks the jaws of victory, The rotten teeth of injury and insult gnaw at me, The local stigmatic handsome gentleman detonates, incinerates the town he’s living in”

Title: Merry Christmas To You
Artist: The High Score
Album: Christmas Split
Year: 2009
Submitted By: annieTUFF
Comments: I know this wasn’t technically a Christmas themed mix, but I’ve been listening to this song a bunch today….so you should too. AND it talks about New Years Eve too…soooo really it’s fitting for the entire month of December (yay).

This is actually one half a free split that Mic Harrison and The High Score put out for download on their website last year (it’s still up, you can download both songs @ http://www.micharrison.com/Download.html. )

By the way, I kept going back and forth between this song, and the Dwarves “Drinkin’ Up Christmas” and the Vandals “My first X-mas As a Woman” so, go find those (slightly offensive) Christmas songs too.

Title: Foregone
Artist: The Decemberists
Album: Long Live the King
Year: 2011
Submitted By: Ryan (Verbow @ Altcountrytab.ca)
Comments: I never thought I would like anything by the Decemberists, but The King is Dead is my favorite album of 2011. The follow up EP Long Live the King is a pretty good addendum, with “Foregone” being the best of the bunch. Cannot believe this song didn’t make the album proper – listen to that pedal steel!