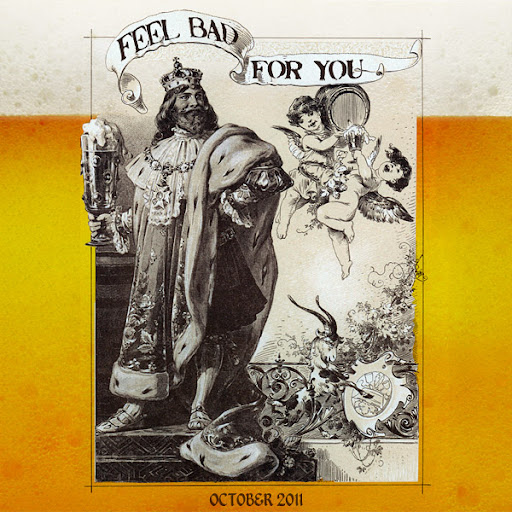 The October installment of the Feel Bad For You mix is here, with contributions from music makers, pushers and lovers. Free for you to stream or download and enjoy while imbibing the libation of your choice.

Nota bene: Due to an oversight, my contribution was not included this month. If it had been, you’d be hearing Little Walter’s “Juke” in this mix. Take your grievances to Matt.

Title: For Stormy
Artist: Chelsea Crowell
Album: Crystal City (2011)
Submitted By: Mando_lines
Comments: For Stormy is an instrumental track off of Chelsea Crowell’s upcoming record, Crystal City. The song originally had lyrics, but Ms. Crowell made the decision to jettison the lyrics and had her producer, Loney Hutchins, play lap steel in place of her vocal track. A Tennessee thunder storm (and tornado siren) are in the background, if you listen closely. Conveniently, the siren was in the same key as the song.

Title: Fortune Cookie
Artist: Los Straitjackets
Album: The Further Adventures of Los Straitjackets (2009)
Submitted By: @popa2unes
Comments: Everyone’s favorite Mexican wrestling mask-wearing, Chuck Taylor-clad, surf and garage instrumental rock band, we had these guys play at a traditional Hot Rod Show I was involved with a couple summers ago, they know how to have a good time and get everyone dancing.

Title: Townsend, TN
Artist: The Royal Court of China
Album: Self-Titled (1989)
Submitted by: toomuchcountry
Comments: The Royal Court of China was a Nashville-based, Elliston Place/Rock Block staple band in the late 1980s who later took a shot at the big time with a relo to LA. Bands such as The Questionnaires (featuring great songwriter Tom Littlefield), Government Cheese, Will & The Bushmen (fronted by Will Kimbrough), and RCC were among the second and larger wave of memorable bands that followed the original Nashville rockers, Jason & The Scorchers. The band got its name from a magazine interview with Jimmy Page and Paul Rodgers. In the interview, the two of them mentioned that they had rejected RCC as a name for their name and instead chose The Firm. RCC’s second album, Geared & Primed, was hard-edged and included their only hit – Half The Truth (http://www.youtube.com/watch?v=l4JNLthoQRU). But their first and self-titled release included a wider range of guitar playing, a mandolin, some slide to give it a distinctly-Nashville touch, a few more harmonies, and this instrumental named for one of the most beautiful, tranquil parts of East Tennessee.

Artist: Japancakes
Song: Only Shallow
Album: Loveless (2007)
Submitted by: Corey Flegel (This Is American Music)
Comments: featuring Pedal Steel God John Neff of DBT before he was
John Neff of DBT…always a badass.

Title: Drivin’ South
Artist: The Jimi Hendrix Experience
Album: Radio One (1989)
Submitted By: BoogieStudio22
Comments: What else is there to say?

Title: Maggot Brain
Artist: The Volebeats
Album: Bloodshot Records: Making Singles, Drinking Doubles (2002)
Submitted By: Truersound
Comments: in the pantheon of great rock instrumentals, Funkadelic’s maggot brain is certainly near the top. This is a killer version with some absolutely necessary steel guitar.

Title: Into the Lungs of Hell
Artist: Megadeth
Album: So Far, So Good… So What (1988)
Submitted By: Gorrck
Comment: Having sent instrumentals the last 2 months, this actually was a challenge this month. Pulled up Glenn Miller’s “Goin’ Home” — way too mellow and sad. Fired up some Xavier Cugat and remembered I had a cover of Ray Charles doing “One Mint Julep”. Then I realized I submitted the Cugat in 2008. Dammit. So here’s some Megadeth. Enjoy!

Title: Ghost Song
Artist: Slithering Beast
Album: Werewolf Ballads (2006)
Submitted By: bootlegend (In My Basement Room)
Comments: One of my favorites from a criminally underexposed band out of Louisville.

Title: Arkansas Traveller
Artist : Norman Blake
Album: Live At McCabes (1976?)
Submitted By: Bowood
Comments: This could be why I play guitar, or it could be why I don’t.

Title: Squid Omelet
Artist: The Queers
Album: Grow Up (1990)
Submitted By: annieTUFF
Comments: Ok, so when I think instrumental I automatically think surf music. and I LOVE surf music. Dick Dale and the Dale Tones, The Ventures, Frogmen, Sentinals, The Rumblers, Beach Boys (although honestly I don’t listen to them as much as the others I’ve mentioned). I could go on and on about surf music. BUT I wouldn’t have ever gotten started listening to surf music if it weren’t thru a weird backdoor way of getting exposed to it, thru punk. So, I decided to put up the song that got me started really listening to surf instead of one of the other surf bands I mentioned. The Queers are a great band that are pretty heavily influenced by surf music, and you can really hear it in their songs, I love them. Although I had heard surf before I didn’t really appreciate it until after getting into punk. Confused now? Me too. By the way, this song ends kind of abruptly, because it’s supposed to lead right into the next track…so this might not really be the greatest pick for a random mixtape….but I’m telling a story with this song, so, suck it.

Title: Si Paloma
Artist: Sun Kil Moon
Album: Ghosts of the Great Highway (2003)
Submitted By: Trailer
Comments: I’m not a big fan of instrumentals, but that’s the theme…so here’s a submission from one of my favorite albums of all time.

Title: Peace in Mississippi (Jimi Hendrix cover)
Artist: Earth
Album: Pentastar: In the Style of Demons (1996)
Submitted by: TheSecondSingle
Comment: Stoner rock at its best. This may not be most people’s cup o’ tea, but you have to admit: it’s pretty badass.

Title: Green Onions
Artist: Booker T. & the M.G.s
Album: Green Onions (1962)
Submitted By: TheOtherBrit
Comments: Thanks to TheSecondSingle for the inspiration via spotify!

Tagged  download, Feel Bad For You, mix.
Bookmark the permalink.
Logging In...