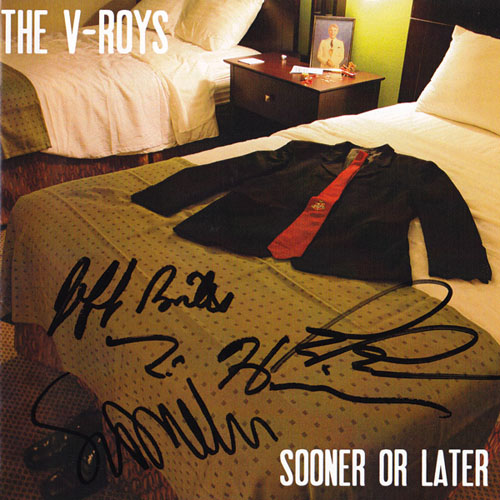 The V-Roys – Scott Miller, Mic Harrison, Paxton Sellers and Jeff Bills – only released two studio albums (and one live album), but they garnered much acclaim and some very enthusiastic fans in their short lifespan. On September 27, Sooner or Later, an 18-track V-Roys compilation, drops. It’s a nice primer for new listeners and includes 5 previously-unreleased tracks to please old fans (my favorites are the V-Roys’ take on Lieber and Stoller’s “Smokey Joe’s Cafe” and an original called “Someone to Push Around”).

Like the sounds of that? How do you like the sound of winning a sexy signed copy of the CD? Just drop your name (and don’t forget an e-mail address where you can be reached) in the virtual bucket (i.e., the comments section of this post) by September 26 at 5 PM EST for your chance to get you some. A winner will be chosen at random and announced on September 27.

(Note: Despite what’s going on between popa2unes and “HAL” in comments, ballot-box stuffing and flirting with the blog owner will not increase your chances of winning.)

Tagged  giveaway, The V-Roys, video.
Bookmark the permalink.
Logging In...