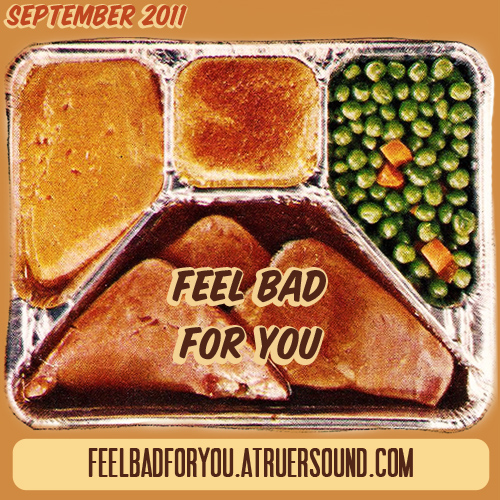 Time for the September installment of the Feel Bad For You mix, lovingly compiled by a miscreant bunch of music makers, music pushers and music lovers. Free for you to stream or download, out of the kindness of our little, black hearts.

Title: Stick With Me
Artist: Nicki Bluhm
Album: Driftwood (2011)
Submitted by: noteethleroy
Comments: This one has gotten under my skin lately, to me it brings back memories of the classic duets I grew up on.

Title: Red on the Head
Artist: Jonny Corndawg
Album: Down On The Bikini Line (2011)
Submitted by: toomuchcountry
Comments: As the calendar turns to September, what comes to mind? State fairs. And with state fairs, what comes to mind? Corn dogs, right? Well, maybe. I first heard Jonny Corndawg in 2009 when he opened for the legendary Billy Joe Shaver at Nashville’s Exit-In. In the two years since, I’ve learned he is a leather worker, an avid runner, a gypsy-like touring machine, and an artist with a brand new release with some pretty witty – even bordering on juvenile – lyrics. Right in my wheelhouse.

Title: Keep On Letting Me Down
Artist: Mic Harrison And The High Score
Album: Great Commotion (2010)
Submitted by: annieTUFF
Comments: I might be a little partial to this band…. But, I truly love this song, it was my instant favorite from this album (“Great Commotion” ), and I think it stands as one of my top songs from Mic and The High Score.

Title: Roamin’ and Ramblin’ Blues
Artist: David “Honeyboy” Edwards
Album: Alan Lomax Field Recording, 1942, taken from Delta Bluesman (1992), Earwig/Indigo Records
Submitted by: Brad Kelley
Comments: This one was easy. Honeyboy Edwards died August 29, 2011, at the age of 96. He traveled and performed with Robert Johnson during the 1930s. He moved to Chicago and performed nearly 100 shows a year until 2008, but continued to play concerts until earlier this year. This guy is the real thing, and his death is the end of an era. He knew and played with everyone in that first generation of Delta Blues. (This might look like two mp3s, but the first is just a brief introduction by the folklorist Alan Lomax.)
Addenum: The Asswipe who manages this mixtape is a fuckhead and keeps you from hearing a historically significant audio recording introduction to this song, which is only 28 sec and it’s just talking and technically not a SONG, so you’ll never get to hear it because he’s a dick.

Title: The World Is Yours
Artist: The Hangdogs
Album: Beware Of The Dog (2000)
Submitted by: Truersound
Comments: been in a conspiritorial anti-gov mood lately, and this song follows that trail nicely

Title: Blue Suicide
Artist: Coma Cinema
Album: Blue Suicide (2011)
Submitted by: Lord Summerisle
Comments: Just discovered this band in August only to find that they are calling it quits at the end of this year. All of their stuff is available for free download at http://comacinema.org/sounds.html

Title: September Song
Artist: Lou Reed
Album: Lost in the Stars: The Music of Kurt Weill (1994)
Submitted by: @mikeorren
Comments: It’s September. Kurt Weill was German. Lou Reed is back, doing an album about a German character, with Metallica. So, all logic screams that this is the only song to submit this month.

Title: Verse Chorus Verse (aka In His Hands)
Artist: Nirvana
Album: With the Lights Out (2004)
Submitted by: Verbow
This month marks 20 years since the release of Nevermind. In 1991, I was an 11 year old with horrible taste in music (MC Hammer anyone?). One day I stopped on MTV while the video for Smells Like Teen Spirit was on, and I was hooked from there on out. More than anything, Nirvana was a gateway to a whole new world of music that I continue to explore to this day. Is Nevermind my favorite album of all time? No, but its one that I still enjoy and still takes me back to that time like no other. Since everyone knows most of those songs by heart, I thought this outtake from the Nevermind sessions would be a good selection. Enjoy.

Title: Everybody’s Got Something To Hide Except For Me And My Monkey
Artist: The [REDACTED]
Album: The [REDACTED] (1968)
Submitted by: Mario Garcia (@marioegarcia, @imperialrooster)
Comments: I’ve been obsessed with this song over the last few days so it seemed like a good one to submit. It’s one of the best songs ever and a top 5 for me from The [REDACTED]. Great riff, great energy, great lyrics. I just hope its inclusion doesn’t get this blog shut down

Title: Bonnie and Clyde
Artist: Little Lisa Dixie
Album: Little Lisa Dixie (2011)
Submitted by: BoogieStudio22
Comments: An artist I stumbled onto quite some time ago. Just learned she put out an album in March 2011. Nice debut.

Title: Alone In This Together
Artist: Star Anna
Album: (2011)
Submitted by: Cowbelle www.morecowbelle.net
Comments: A six-minute song is a little obnoxious but worth every second.

Tagged  Feel Bad For You, mp3, song embed.
Bookmark the permalink.
Logging In...