Home » feature » Put the Needle on the Record: The 1980s at 45 Revolutions per Minute

Put the Needle on the Record: The 1980s at 45 Revolutions per Minute 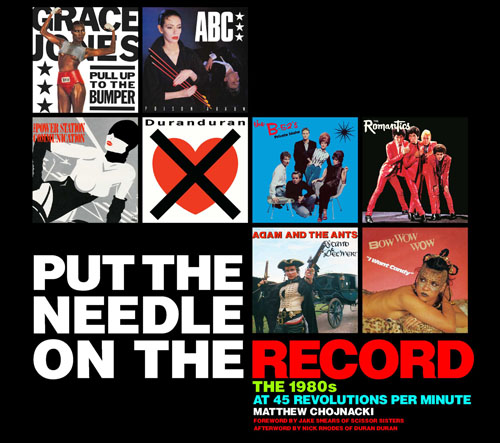 Many remember the 1980s as a time when style was deemed more important than substance (and all the unfavorable connotations that could imply), but Put the Needle on the Record: The 1980s at 45 Revolutions per Minute, a new book by Cleveland, Ohio, writer and music/pop culture historian Matthew Chojnacki, shows how the style of the ’80s was often carefully orchestrated to reflect the substance as the bold art on the sleeves of 7″ records was put to work selling a single song among hundreds of other songs on record store shelves.

Inspired by his own enormous collection of 7″ and 12″ records, Chojnacki has compiled over 250 7″ covers from the ’80s and included stories, insights and interesting comparison of the ephemeral trappings that did more than just protect the vinyl discs inside. With an afterword by ’80s style icon Nick Rhodes (Duran Duran), Put the Needle on the Record spotlights covers of everyone from Luther Vandross to Def Leppard to the Smiths in a stylish hardcover format and includes information gleaned from interviews with some 125 musicians and cover artists.

A couple of my favorite examples from the book include entries on Kate Bush and Def Leppard. 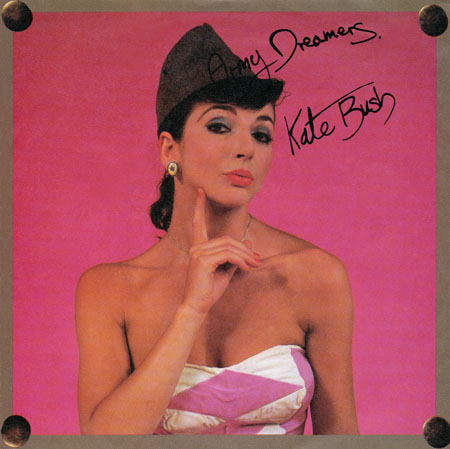 Designer John Carder Bush (also Kate’s brother) on “Army Dreamers”: “Have you ever noticed that a lot of the traditional anti-war songs, the ones that have come from soldiers’ experience, often have perky little tunes that almost deﬂect you from the cold reality of the words, and, somehow, this makes their message far more chilling? ‘Army Dreamers’ is one of those kinds of songs. The cover is an attempt to recreate a ‘40s soldiers’ pin-up girl, an integral part of that dreamy madness that attracts young men to the trappings of war. It’s also worth remembering that the wonderful video to the song was hardly seen because it was considered as too violent— such an innocent time!” 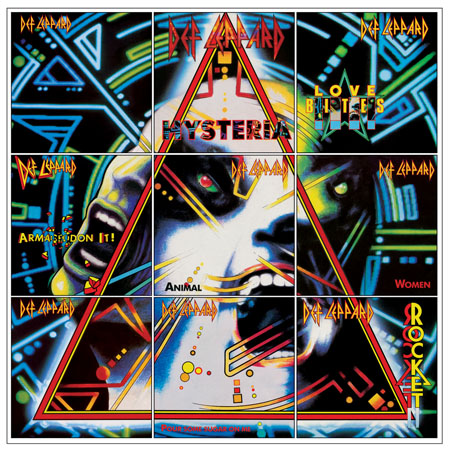 An impressive seven hit singles were released from Def Leppard’s Hysteria. Each of the single sleeves comprised a portion of the album’s cover art. The two ﬁnal puzzle pieces were sold in a limited edition U.K. box set for “Love Bites.”

H y s t e r i a designer Andie Airfix: “Those were the days when record companies stretched the limits of seven- and twelve-inch single formats. Since Mercury Records had conﬁdence in the success of so many singles from the album, they immediately agreed to the puzzle concept.”

Airﬁx vividly remembers the band’s reaction to her artwork, “the band saw my preparatory sketch and absolutely loved it. They wanted to retain a powerful image in line with hard rock, but also to modernize it and avoid the clichés. The head was intended to express dark fears associated with the psychotic state of hysteria. The computer background was
one of the ﬁrst computer-generated graphics. Believe it or not, the image was a black-andwhite drawing, fed into a computer, colored very primitively, and then output as an 8 x 10 transparency—essentially a screen shot (hence the screen texture).”

Learn more about Put the Needle on the Record, available September 28, see some sample pages and pre-order the book at Matthew Chojnacki’s website.