Barnstormer 5 is coming to Akron! 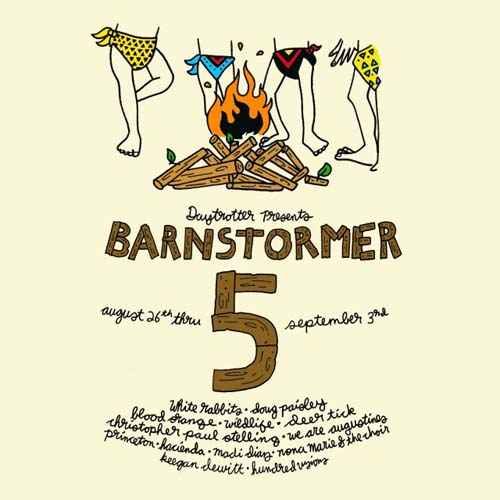 There are still music-loving, internet-connected people in the world who don’t know about Daytrotter. That’s amazing to me. Since 2006, Sean Moeller and crew have been recording sessions by touring bands and throwing the results of those sessions up on the internet for anyone and everyone to download and enjoy for free, and since I learned about the site a few years ago, I have felt it a wonderful example of what the internet can be used for. The Horseshack – the studio in Rock Island, Illinois, that sees most of the recording activity you find at Daytrotter – has welcomed everyone from the Preservation Hall Jazz Band to Dinosaur Jr. to Kris Kristofferson to Andrew W.K. to Charlie Louvin to that new indie band you keep hearing people talk about. NTSIB favorites A.A. Bondy, the Felice Brothers and Local Natives all have sessions up, and the amazing Mr. Patrick Sweany has a session forthcoming. And those good Daytrotter people post at least one of these free sessions every day, sometimes posting two sessions in one day.

In addition to all that goodness, since the summer of 2009, the Daytrotter crew have been putting together the Barnstormer tours. These tours gather a gang of Daytrotter alumni and send them out to play at various barns around the midwestern United States. Real barns. Past Barnstormer artists have included Justin Townes Earle, Dawes, Local Natives, Suckers, the Walkmen, Ra Ra Riot, Delta Spirit… you get the idea. Good stuff.

This year, Barnstormer will be hitting Ohio for the first time, and we’re freaking excited. On August 31, the Conrad Botzum Farmstead Barn in Akron will be the place to see White Rabbits, Doug Paisley, Wildlife, Princeton, and, one of my favorite live bands, Hacienda (who just recorded their third album in Nashville with their old friend Dan Auerbach). All of that for just $20.

We highly recommend buying your tickets now. No, now. Right now. Because not only does that ticket price kick up five dollars on the day of the show, but if you purchase your tickets by August 20, you get a Barnstormer poster and 40% off Daytrotter merch. Plus, you help the Daytrotter crew relax, knowing they can actually fund this fantastic undertaking.