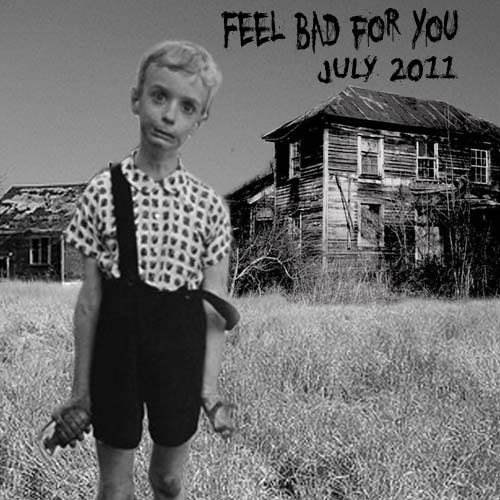 A review of Deep Blues Festival 2011 is forthcoming… but since I spent most of yesterday trying to recover from it (so you know it was good), the review isn’t here yet. But the Feel Bad For You July mix, featuring contributions from the usual band of rabble rousers and miscreants, is here. Please enjoy responsibly.

Song: T.V.A.
Artist: the everybodyfields
Album: Half-Way There: Electricity and the South
Submitted by: Brad Kelley
Comments: To me, this song is almost perfect. Great lyrics about a real historical event from the area I grew up in (I’m sure my relatives would have taken this view), great harmonies and picking, and it really sets a mood.

Title: “Everywhere With Helicopter”
Artist: Jason Isbell & The 400 Unit
Album: Sing For Your Meat: A Guided By Voices Tribute (2011)
Submitted by: The Second Single
Comments: A fantastic, original take on a Robert Pollard classic.

Title: Ex Ballerina
Artist: The Gadjits
Album: Today is My Day (2002)
Submitted By: Ryan (Verbow)
Comments: The Gadjits started out as ska-punk proteges of Tim Armstrong (Rancid) but by their third album developed a more pop/rootsy rock sound. This song reminds me of what its like being in your early to mid teens when you fall for someone for the dumbest reasons. It could be called Ex Girlfriend or Ex whatever and you’d still know what he’s talking about.

Title: Indivisible
Artist: The Dirtbombs
Album: We Have You Surrounded (2008)
Submitted By: April @ Now This Sound Is Brave
Comments: I have a friend who believes Mick Collins is the perfect man. I’m not about to argue.

Title: The Fifty Percenter
Artist: Rich Hopkins & Billy Sedlmayr
Album: The Fifty Percenter (2001)
Submitted By: toomuchcountry
Comments: I can’t believe the year is half-over. Recognizing that reality, I’m submitting the title track from Rich Hopkins’ 2001 release. Hopkins was the iconic guitarist for Tucson’s The Sidewinders (later known as The Sand Rubies). His guitar talents continue on this release. With vocals from Billy Sedlmayer, the combined sound is a more subdued, polished, even versatile sound than when Hopkins was with The Sidewinders/Sand Rubies. Yes, I submitted a track by The Sidewinders last month. Yes, I got good feedback. Yes, the song title fits this month. No, I won’t apologize for going back-to-back on Hopkins-related music.

Title: One Hand in the Furnace
Artist: Wrinkle Neck Mules
Album: Let the Lead Fly (2009)
Submitted By: Simon
Comments: Favourite track from my favourite Wrinkle Neck Mules album, apparently a new album’s due end of the year – looking forward to that.

Title: Land It
Artist: Vulture Whale
Album: self-titled (2007)
Submitted by: Corey Flegel
Commentary: So I’ve totally submitted this song to this mixer group before. I don’t care, it’s my favorite song ever…I know a lot of folks who feel this way too…This list includes some of my favorite music snob friends and some members of some of my favorite bands.

Title: Western Town
Artist: Kill County
Album: The Year of Getting By (2010)
Submitted By: Slowcoustic
Comments: Always a sucker for a slowed down jam with a bit of country twang. Kill County has been an out of nowhere kick in the teeth for me and I can’t get enough of this album (what should have been a top 10 of 2010 if I had only heard them earlier). This is what I consider real country music and its frickin’ great.

Title: 3 AM
Artist: 13ghosts
Album: unreleased
Submitted By: TheOtherBrit
Comments: Possibly my favorite song I’ve heard this year. Hoping it appears on their new album coming out this month.

Title: Helter Skelter
Artist: Matt Jorgensen +451
Album: Another Morning (2008)
Submitted By: BoogieStudio22
Comments: I’ve been on a bit of jazz bender recently, so I thought I’d toss something a bit different into the FBFY mix this month.

Title: Ragged But Right
Artist: Riley Puckett
Album: from a long time ago
Submitted By: Truersound
Comments: original and best version of this song

Title: Grandpa Carl
Artist: The Warped 45s
Album: Matador Sunset (2011)
Submitted By: Rockstar Aimz
Comments: A song about bootlegging booze from Canada to Detroit during
prohibition. This is an up-and-coming alt country band from Toronto.
I saw them open for the Drive-By Truckers about a year and a half ago.

Tagged  download, Feel Bad For You, links.
Bookmark the permalink.
Logging In...