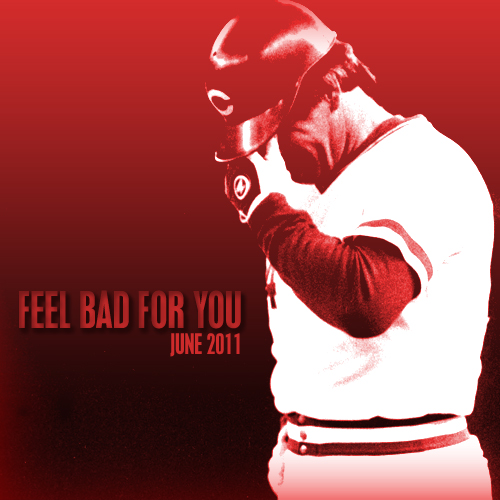 Feel Bad For You hosts a monthly mixtape comprised of submissions from music bloggers, Twitterers and a rockstar or two, and it’s always a good time. A celebration of eclecticism, you can enjoy it all below, by stream or by download.

Title: Angel From New Orleans
Artist: The Dead Exs
Album: Resurrection (2011)
Submitted By: @popa2unes
Comments: David Pattillo – electric slide guitar and vocals – Wylie Wirth – on the skins. Pattiillo is a producer with a credit list from Alanis Morrissette to the Hold Steady, The Black Crowes to the Beastie Boys and last year produced the Reni Lane debut for Universal Motown. Wirth has toured extensively in Europe and the US with various bands and was a member of the Warner Bros act Sweet Lizard Illtet.

Title: What She Turned Into
Artist: Retribution Gospel Choir
Album: Retribution Gospel Choir (2008)
Submitted By: verbow1
Comments: I like to think of myself as ahead of the musical curve, finding new stuff before anyone else. The truth is I’m often several years behind, always trying to catch up, hence a 2008 release just finding me at the end of 2010. This band features Alan Sparhawk of Low – I’m not the biggest Low fan but these guys really stick with me. Nothing fancy, just a good rock song.

Title: City Lights
Artist: National Grain
Album: self-titled (2006)
Submitted By: Corey Flegel
Comments: some dude on an Amazon review of the record said it best about NG- Their songs sound like deepcuts off of some of the early, better albums by Haggard and the Possum.

Title: Ain’t No Such Thing As a Superman
Artist: Gil Scott-Heron and Brian Jackson
Album: Midnight Band: First Minute of a New Day (1975)
Submitted by: April @ Now This Sound Is Brave
Comments: Shortly after I received the June FBFY call to arms, it was confirmed that Gil Scott-Heron, the man responsible for “The Revolution Will Not Be Televised”, died. His album I’m New Here was possibly my favorite of 2010, and I was looking forward to seeing what he would do next. Dying wasn’t what I had in mind.

Title: Stuck in an Office
Artist: Edmunds Crown
Album: Regrets of a Company Man (2006)
Submitted By: Simon
Comments: One of the may highlights from an eighteen track album of 3 minute power pop songs everyone should own

Title: Penicillin Penny
Artist: Dr. Hook and the Medicine Show
Album: Belly Up! (1973)
Submitted By: Shooter Jennings
Comments: Be cleansed by her dirtyness

Title: $2 Pints
Artist: Last False Hope
Album: Outlaw Radio Compilation Vol. 1 (2010)
Submitted by: Adam Sheets
Comments: Everything that is great about honky tonk and punk is represented in this song. This is the sound of the future

Title: Never Miss Your Mama
Artist: The Black Twig Pickers
Album: Hobo Handshake (2008)
Submitted By: Truersound
Comments: I’ve been seeing these guys a lot lately, and every time I swear they get better. Love it when they break out the washboard, especially on this song and on The Coo-coo. See these guys live if you get a chance, talk Mike into telling some stories. This song also makes me wish I could clog like a drunk hillbilly.

Title: Fuck Me Up
Artist: Brandon Adams And The Sad Bastards
Album: Self Titled (2011)
Submitted By: Romeo Sid Vicious
Comments: This one has been stuck in my head for about a week now. It’s a raw song that’s just plain amazing. I don’t have a rant for this one. Just one I have been enjoying a lot lately

Title: My Back Pages
Artist: The Ramones
Album: Acid Eaters (1993)
Submitted By: @mikeorren
Comments: In honor of Bob Dylan’s 70th, a cover I just rediscovered

Title: Every Day You Have To Cry
Artist: Bon Scott
Album: Round And Round Compilation (1967)
Submitted by: Erschen
Nothing spectacular here but interesting to hear Bon Scott before his AC/DC days. This was a band called the Valentines. The song is by Arthur Alexander and has been covered by quite a few including the Bee Gees and Dusty Springfield.

Title: What Am I Supposed To Do?
Artist: The Sidewinders
Album: Witchdoctor (1989)
Submitted By: toomuchcountry
Comments: The deadline was drawing near for this month’s submission, and I hadn’t chosen my June selection. So my quandary naturally resulted in my submitting this great track by Tucson AZ’s The Sidewinders (later known as The Sand Rubies).

Title: I Can Buy You
Artist: A Camp
Album: A Camp (2001)
Submitted By: DC Noise
Comments: A Camp makes some mighty infectious pop music. The band is fronted by Nina Persson, aka That Girl From The Cardigans (an underrated band, in my opinion).

Title: Heart Attack
Artist: Raphael Saadiq
Album: Stone Rollin’ (2011)
Submitted By: @BoogieStudio22
Comments: Raphael Saadiq has been around for a while, but in his most two most recent releases he’s been digging into the Motown catalog of sounds. He’s still got the R&B / Soul thang going on, but his most recent album rocks out a bit more.

Title: Down In The Valley
Artist: The Head and the Heart
Album: Self-titled 2011
Submitted by: Cowbelle / morecowbelle.net
Comments: I’m not huge on this band in general, but I heard this song on a sunny walk in my new stomping ground the other day and it spoke to me. Something about trouble and whiskey – and I think there’s some optimism in there too.

Title: Heart Won’t Bend
Artist: Branden Barnett
Album: Heart Won’t Bend (2011)
Submitted By: TheOtherBrit
Comments: I forgot to send in my submission so made this selection in about 30 seconds. This song is part of a series of singles and covers Branden has been releasing on his bandcamp (bandcamp.com/tag/branden-barnett). 100% of what you hear on there is Branden and I think that’s pretty badass.

Tagged  Feel Bad For You, mp3, stream.
Bookmark the permalink.
Logging In...