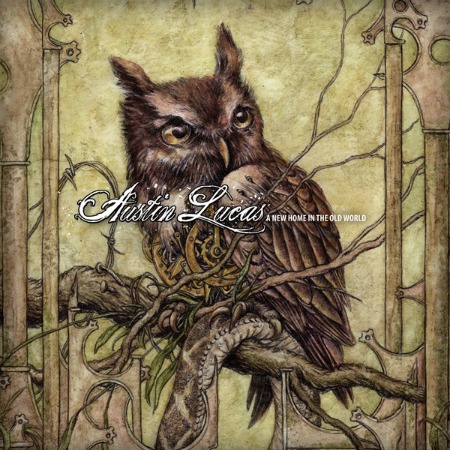 As has likely become obvious to regular NTSIB readers, I’m a sucker for a good voice. A voice full of pathos and urgency – and especially one that has been roughened with whiskey and cigarettes – will get me every time. Austin Lucas has a classic bluegrass voice. “High lonesome” is a good phrase for it. And while this sort of voice would seem best paired with quiet instrumentation and pretty guitars, as Lucas has often used in the past, on his latest album A New Home in the Old World, Lucas shows that bringing up the intensity of the music to match the intensity of the voice benefits both the singer and the song. Check out a little of what I mean on my favorite song from the album, opening track “Run Around”.

Run Around by Austin Lucas

It’s a sharp smack in the face of an introduction to an album that pulls a taught thread of emotional intensity throughout. Later on in the album, such as on lead single “Thunder Rail”, electric guitar is pulled into the mix, recalling some of the best roots-minded alt.rock.

Lucas is an earnest songwriter, but New Home doesn’t fall into the usual singer/songwriter trap of using the music as nothing more than a bed of lettuce for the entrée of the lyrics. This is not a poetry reading. This is music flowing with blood, guts, yearning and hope.

You can purchase the album directly from Last Chance Records (my advice is to purchase directly from the label whenever possible – they’ll put much more care into your order than a megawarehouse would and often at a better price), where a live album from Lucas is also available. You can also catch him on Willie Nelson’s Country Throwdown 2011 Tour that starts up toward the end of this month.