Crazy and the Brains/The Due Diligence/Shivering Timbers at Now That’s Class, Cleveland, OH, 1.13.11 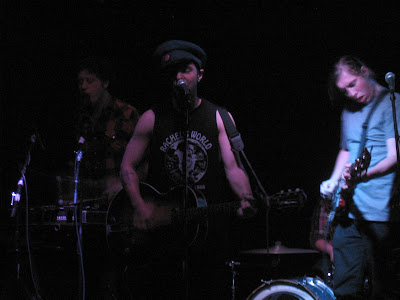 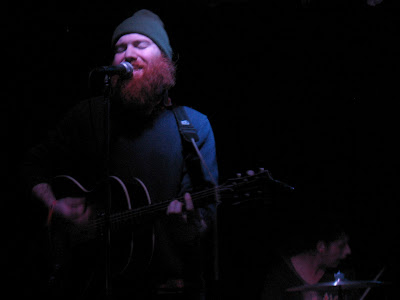 Regular readers know I’ve been enjoying the music of the Due Diligence (i.e. Isaac Gillespie) for a while now, so I was excited for the opportunity to see the New York-based artist live. Gillespie set the tone by kicking off with a ragged tribute to Sly and the Family Stone in the form of a cover of “Family Affair”. Going from a quiet figure (with an impressive beard) to a stomping, howling demon in seconds, Gillespie seems to be less playing and singing the songs than he is pulling them out of his chest, strand by gut-drenched strand.

While the touring version of the Due Diligence is much stripped-down from the album line-up, the song arrangements lend themselves easily to a simple guitar-and-drums set-up, especially when amped up by Gillespie’s flip-a-switch energy. Including originals like “I Will Wreck Your Life” and “Uncle Stephen” and covers like the aforementioned “Family Affair” and Steve Miller’s “Keep On Rockin’ Me, Baby”, the Due Diligence set covered extremes from slow and sultry to a screaming wall of sound.

I Will Wreck Your Life • Cleveland, OH from the Due Diligence on Vimeo. 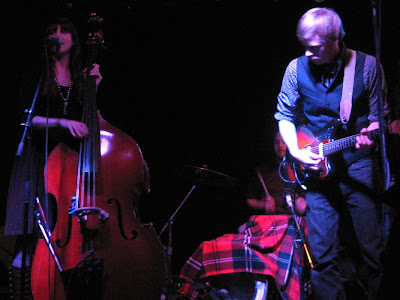 “This is a nursery rhyme,” Sarah Benn almost seemed to be warning the audience, with finger pointed, at the beginning of Shivering Timbers’ set. Sarah and husband Jayson traffic in nursery rhymes, littering their album We All Started in the Same Place with jazzy arrangements of the childhood rhymes along with songs inspired by their daughter. But Shivering Timbers’ music is not strictly for the babies. With Sarah’s slinky upright bass and Jayson’s bluesy guitar – along with drums and appearances by banjo, toy piano and toy hand bells – stories like that of the crooked man who walked a crooked mile sound like they were birthed in a smoky club instead of at cribside.

While Dan Auerbach – who produced Shivering Timbers’ album – is known for his ability to capture a honest, live sound, the Benns should be seen in concert to appreciate the range of their talents, such as Sarah’s powerful voice and Jayson’s skilled guitar work. Not to mention the fact that they are charming as all hell, Sarah projecting a warm and friendly presence while Jayson, with a grin, thanked the crowd for “being drunk enough” at one point. And the way the Benns look at each other while playing is enough to make a seasoned cynic melt a little.

The dance-hungry crowd – who were obviously familiar with the band, requesting “Baby Don’t” and sending up a pathetic whine when they thought they might have to go the night through without hearing “Little Bird” – was given enough ammunition to keep them happy with the likes of the rock-out endings to “Little Bird” and “Evening Prayer”.

Tagged  Crazy and the Brains, Shivering Timbers, show review, The Due Diligence.
Bookmark the permalink.
Logging In...