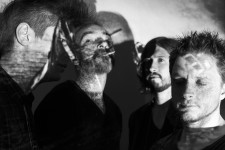 Their first, self-titled release is a multimedia (music and images) project that is a reaction to the recent, ongoing political and economical unrest in Greece. Their songs are not protest songs, but rather a dark ambient soundtrack for a revolution. In some instances, also a live recording of the revolution, as some of the tracks include field recordings made in Greence in 2012 and 2013. The images that form the other half of the project are included with the liner notes, and there is also a short film in the works.

Here are three songs – two long, one short – to serve as examples and enticement: