A Good Read A Good Listen and A Good Drink, Adam Sturgeon, WHOOP-Szo

WHOOP-Szo is a fluid musical collective currently operating out of Guelph/London, Ontario, Canada. Previously they were my most favorite purveyor of tone-poems inspired by the Canadian Arctic, but with Mirror North, the a-side of their offering for Record Store Day, things have taken a turn for the sludgy.

The record/song was created by an incarnation of the band that featured Adam Sturgeon, Eric Lourenco, Joe Thorner, and Kirsten Palm and recorded at the Quarantine in Port Greville, Nova Scotia with Colleen Collins and Dave Trenaman (Construction & Destruction) and Tim Glasgow (Metric, Sonic Youth).

It arrived in my inbox described as the sound of “a band in a single room; ocean, old cabin, blueberry hill, bear shit and all​” and, well, I don’t have much to add to that, really.

Well, ok, perhaps a few things: It has a certain hypnotic ebb and flow. I keep going back to it to sway along with the drum and meditate on the Baby I’m scared refrain and then be jarred back into alertness by the jagged roar of a guitar at the end. It sounds like the ocean in the sense that it sounds like the feeling of a great big rolling Atlantic breaker coming in, the choice: jump or dive, and the hard tug of the current that signals you’ll get hauled out to sea if you aren’t careful.

And now I turn the floor over to Adam Sturgeon, who has joined us today to share a favorite book, record and drink. 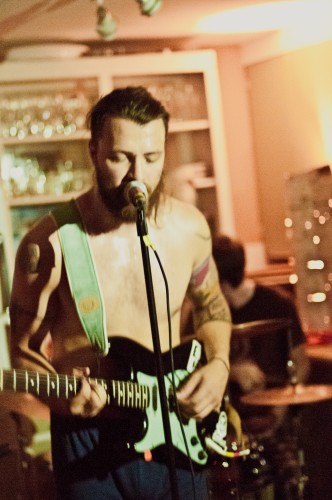 This book speaks to me. It’s an emotional journey through one individuals life as affected by Residential School. It does a lot in that it makes me think of my own families history, and while notably different there are striking similarities that bring me close to my father and grandfather; building a greater capacity to understand our relationship. Not for the faint of heart, there is a huge let down as you hold hope that one character is different than the impending results.

How could we record our album with Colleen and Dave and not mention their albums. This one in particular has a ton of appeal for WHOOP-Szo as a band, our favourite track, The Bear:

Chaga [tea], [made from] the fungus that grows on Birch trees, a major influence on this record.