A Good Read normally happens on Fridays, but this week we’re having a Very Special Monday Presentation. In the spotlight today are The Dirty Nil, of Hamilton, Ontario, who have some very exciting plans this summer: they’re headed out on their first Warped Tour.

If you have not already had the pleasure of rocking out with them, here’s a brief introduction.

First up: Guided by Vices, half of the single they released last summer, and an explosion of punk rock joy:

Nicotine, from Smite (2014): a little bit of a slow burner, live, but still raw and propulsive:

And in conclusion, Little Metal Baby Fist, from their 2012 record of the same name. I think it was the first The Dirty Nil song I heard. My reaction was This is where the pit goes off like a rocket, right? which is still how I feel about it today. Hang on to your hats and sunglasses, Warped Tour, it’s going to be a wild moshy ride:

And with that I turn the floor over to lead singer/guitar Luke Bentham, who joins us today to share a favorite book, record and drink. 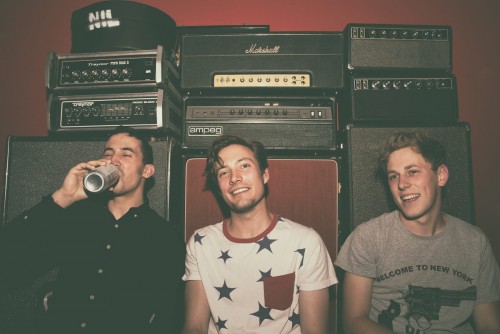 The Dirty Nil – Luke Bentham is center, in star shirt.

In my lifelong pursuit for the shittiest, trashiest cheese-rock biography, Ace Frehley’s No Regrets currently stands as my holy grail. Of pure fucking cheese. Poorly written and wandering in focus, Ace recounts his booze and coke fueled journey from being an unknown fuck-up to being a world famous multi-millionaire fuck up. He talks about his “well documented” encounters with extra-terrestrials and makes repeated cringe-worthy references to his new CD. Truly a work of questionable quality in every way, No Regrets is a terrible fucking book and definitely one of my favorites.

Metallic K.O. by the Stooges is technically a live album, but to me it’s the sound of everything breaking. Recorded in front of a hometown Detroit crowd in ’74, it was the Raw Power-era Stooges’ final stand. Its about 2 hours in length and mostly consists of Iggy Pop taunting the audience as they pelt the band with lighters and bottles. Musically, its rough at best, though James Williamson’s guitar playing is just as fucking thunderous as ever. My favourite part of the entire record is when Iggy leads the band into playing Louie, Louie for like 20 fucking minutes, JUST to piss of the already feverishly aggravated audience. “Missed me FUCKER!! Gonna have to try harder than THAT!” he taunts as you can clearly hear a beer bottle smashing into the stage. Now THAT’S a fucking live album.

Gas station coffee. This is what it’s all about folks. The further from the highway, the better. Its gotta be that black sludge that eats sunshine. Mmmmmm who knows what they’re putting in this stuff? I sure don’t. But it makes me feel like a structural fire, ready to get stuff done.

Tagged  A Good Read a Good Listen and a Good Drink, Canadian Music Week, The Dirty Nil.
Bookmark the permalink.
Logging In...