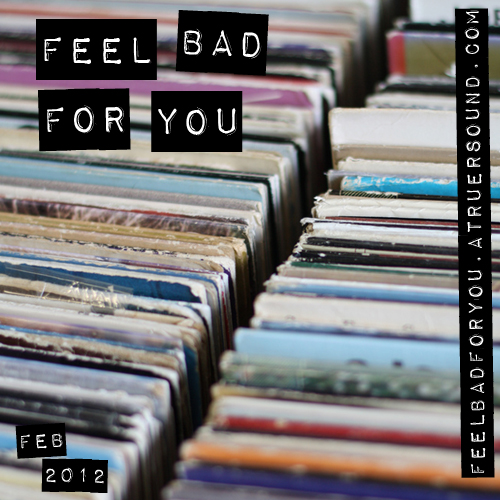 The Feel Bad for You February mix is 25 songs worth of badass designed especially for YOU! (The universal you, not you specifically. Get over yourself.) If you’ve never downloaded an FBFY mix before, lovingly crafted by music lovers, music makers and music enablers (for more information about your generous contributors, check the FBFY site), this is the one to start your habit. First hit’s free.

4. Title: No Draws Blues
Artist: Valerie June
Album (year): 5 Dollar Cover Soundtrack
Submitted By: Autopsy IV (ninebullets.net)
Comments: Stumbled across this song the other day. Had forgotten how much I liked it.

5. Title: You Used to Be a Sweet Clover Shaker
Artist: Robert Pete Williams
Album (year): Mojo: Brotherhood, a compilation of tracks from Mojo, from 2011, I think
Submitted By: Brad Kelley
Comments: Sometimes I think he’s the only blues artist that really matters, then sometimes I think he’s the only artist that matters. There’s nothing like him in the history of blues. His most famous song, I’ve Grown So Ugly, was covered by the Black Keys (on Rubber Factory).

6. Title: One Way Or Another (I’ll Be Free)
Artist: Dirty Bourbon River Show
Album (year): Volume One (2010)
Submitted By: Romeo Sid Vicious
Comments: I have been in a little bit of a slump lately and digging through my older gems to find some solace and rediscovered this little beauty. I love the guys in DBRS and this song has music that’s kind of happy and jumpy as well as lyrics that give a nice big “Fuck you” to just everything bringing someone down. It’s a fun little tune!

7. Title: Behind The Nut Love
Artist: John 5
Album (year): Songs For Sanity (2005)
Submitted By: erschen
Comments: I make to no bones about my metal head past and I love to watch That Metal Show on VH1 Classic. They have a different musician (mostly guitarists) that take them to break on each episode. I was quite intrigued by John 5, unique and varied styles. I knew he was a shredder and was most famous for being Marilyn Manson’s guitarist but I didn’t know that he has been a session guitarist for folks ranging from K.D. Lang to Garbage to Lynyrd Skynyrd to Ozzy. He’s a big Buck Ownes fan and has a penchant for chickin’ pickin’ as well. Really love this track, a bit of twang on this one. He’s fingering the strings behind the nut to make it sound like a pedal steel.

8. Title: Unfolding
Artist: Folk Family Revival
Album (year): Unfolding (2011)
Submitted By: Mike Orren
Comments: My friends literally dragged me out to McKinney, Texas, to catch this young Houston band a few weeks ago and I’ve worn out their album since. In their early twenties, these three brothers and their best friend are turning out some of the most mature, nuanced lyrics I’ve heard in a while with a sound that at times echoes the Avett’s, the 97′s and Ray Wylie Hubbard. It’s spiritual music, but not in a preachy way. It sneaks up on you and manages gravitas and fun in the same number. My only quibble is another tune where they have a beautiful line about being alone and maybe, like Johnny, finding your June Carter when you’re old. (Sorry boyos, I refuse to call 36 old.) That said, it’s a varied and polished disc without a clunker– but this song, the title track is my favorite. It’s become the theme song of my 2012 to date.

10. Title: Jack and Joan
Artist : The Bear
Album : 7″ split w/ Belle Adair (2012)
Submitted By: Corey Flegel (This Is American Music)
Comments : Just another Muscle Shoals band…doing good things. This is from their recent split w/ fellow Shoals-ians Belle Adair. This is available via Itunes and you can order the 7″ through Pegasus Records. I’m pretty sure I’ve heard that they will have a new record done at some point later in the year. Backtrack to their 2010 self-titled one if need be. I love it…lots.

12. Title: For You
Artist: Roky Erickson (with Okkerville River)
Album (year): True Love Cast Out All Evil (Deluxe) (2010)
Submitted By: annieTUFF
Comments: Roky Erickson doesn’t need any explanation. And if it does, then watch his documentary “You’re Gonna Miss Me.”
Also, and this is just a silly random note, next time you need to pass anyone anything (for instance…the telephone, salt, the remote, french fries) sing the first line of “For You” but replace an actual lyric with the item you’re handing them. Just like this….”For You, I’d do anything for you, For You there ain’t nothing I wouldn’t do…For you, your beauty makes the sunrise, For You, so I’m passing you these fries” and see if they get it….if they do, give them a high-five and become best friends forever.

13. Title: Don’t Love Me Wisely
Artist: The Setters
Album: Self-Titled (1994)
Submitted By: toomuchcountry
Comments: Though we have no defined theme for the month of February, I felt compelled to submit some sort of love song. Right? The Setters was a Super … err, umm … Way-Above-Average Group featuring Alejandro Escovedo, Walter Salas-Humara from The Silos, and Michael Hall, who once fronted The Wild Seeds before releasing several solo albums. The release was produced by solo performer, guitarist for Lucinda Williams, and champion of the music and legend of Blaze Foley, Mr. Gurf Morlix. Hall – who now writes for Texas Monthly magazine – is on vocals with Escovedo on guitar. Salas-Humara contributed percussion rhythms by riffing on snare drum cases, Tropicana orange juice crates, and metal shelving.

14. Title: I’m So Bored With The U.S.A.
Artist: The Clash
Album (year): The Clash [US] (1979)
Submitted By: BoogieStudio22
Comments: Here I sit, wearing my Clash t-shirt. I wanted to hear something from the 70s, created a playlist, hit play and this was the first song up. Must be an omen.

15. Title: The Gravedigger’s Song
Artist: Mark Lanegan
Album (year): Blues Funeral (2012)
Submitted By: Ryan (Verbow @ altcountrytab.ca)
Comments: Love me some Mark Lanegan. First track off of his new album that should be out by the time this mix is posted (2/7/12).

16. Title: The Great Atomic Power
Artist: The Louvin Brothers
Album (year): Weapon of Love (1962)
Submitted By: Rockstar Aimz
Comments: One of my new years resolutions is to listen to more pre-1970 classic country music. You don’t get much more classic than the Louvin Brothers.

18. Title: Marley Purt Drive
Artist: Bee Gees
Album (year): Odessa (1969)
Submitted By: TheSecondSingle
Comments: An unexpectedly great homage to The Band by one of the lamest (and secretly greatest) bands of the ’60s. Sure to turn even the most ardent Bee Gees hater around (however slightly).

20. Title: Get Your Ass On Out Of Here
Artist: Texas Wettnex
Album: Leaning In (2006)
Submitted by: Mando Lines
Comments: Just discovered Michael Wren in the last couple of weeks. He was the singer songwriter for the Texas Wettnex, now he’s a solo act. His most recent record is Rien Vraiment. You can stream some of his songs at www.michaelwren.com. Good stuff.

21. Title: Sweet Red Wine
Artist: Some Dark Holler
Album (year): Some Dark Holler EP (2011)
Submitted By: TheOtherBrit
Comments: These guys/gal are awesome live plus their EP is FREE on thisisamericanmusic.com!

22. Title: Tar Hani (My Love)
Artist: Bombino
Album (year): Agadez (2011)
Submitted By: April @ Now This Sound Is Brave
Comments: The recent Rubber City Review post about Bombino reminded me that you all need a shot of this desert rock. This is another one of those gems that Rick Saunders introduced me to, and it is sublime stuff. This song is a particular favorite because it makes me think of Sandinista!-era Clash.

23. Title: Drift (Live on InDeKringloop.nl)
Artist: Kim Janssen
Album (year): to be released on “Ancient Crime” – March 2012
Submitted By: Slowcoustic
Comments: As a member of The Black Atlantic, Kim Janssen is no secret to the “folky” community and this song proves he is coming into his own. His sophomoric album “Ancient Crime” should see him gain many fans on the genre. This audio rip is of the video of his performance that can be seen at http://www.youtube.com/watch?v=R-r60xATwUg

Tagged  download, Feel Bad For You, mix, mp3.
Bookmark the permalink.
Logging In...