A Conversation With: Blackwater Jukebox 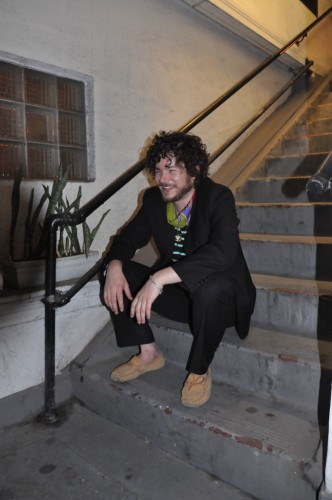 Blackwater Jukebox, aka Geordie McElroy, originally from Queens, NY but now based in Los Angeles, is the fourth member of a (so far) very exclusive club: bands whose music April and I both like. (Other members: The Felice Brothers, AA Bondy, and We See Lights.)

I won the virtual game of Rock-Paper-Scissors this time, and thus got to sit down with Mr. McElroy for a virtual chat about his tunes and his very diverse resume: he has been a bus driver, a taxidermist’s apprentice, a deejay in Vermont and a field music archivist for the Library of Congress and private collectors.

In the spirit of fair warning: I use way too many exclamation points and there is some discussion of dead bobcats.

Amazing that you are an archivist! I don’t know what gave you the bug, but for me the turning point was the discovery of Alan Lomax (and all his associated acts/performers – especially Leadbelly). I fell head over heels and knew that’s what I was supposed to be doing with my life – the concept of an Indiana Jones meets Phil Spector who travels the world in search of harmonic treasure rather than gold just slayed me.

What got me was actually a project I did as a senior in college when I had to spend a lot of time in the archives, reading old minute books for the literary society I belonged to.

I haven’t yet gotten to be Indiana Jones in search of music, but I did work on a massive natural history photo collection that allowed me to visit the Canadian Arctic and British Guiana without ever leaving my desk. And occasionally I get to read letters that start with “Somehow, we survived the revolution.”

What are your favorite stories from your travels and/or collections?

As far as field recording stories go: one of my favorites takes place in Mongolia, during what began as a fishing trip for taimen – the largest and most voracious salmonid. A week into the vacation from field recording, on the edge of the Khan Kentii Strictly Protected Area (where Genghis Khan’s ultra-secret gravesite supposedly lies), our guides got hooched up on ger (fermented mares’ milk), and told us about a shaman throatsinger, who apparently knew a song that could reanimate the dead.

Needless to say, fly fishing quickly took a back seat to locating this itinerant Tengrist shaman with the power of reincarnation. Against all odds, we tracked down the throatsinger. Only instead of regaling us with ancient incantations with the power to bring the dead back from beyond the grave, the shaman just sang us some AC/DC songs, taking extreme liberties with the melody and lyrics. My favorite rendition was DIRTY DEEDS – hands down.

I think pretty much ANYTHING would have to take a back seat to finding the wandering shaman with the power of reincarnation. I totally love that he sang you AC/DC songs instead, too.

The reanimator shaman with a penchant for cock rock really hits home some key concepts: 1) every corner of the globe – no matter how remote – has been impacted by 20th century American music, 2) real musicians do not make boundaries between folk and pop music – they just play what they want. 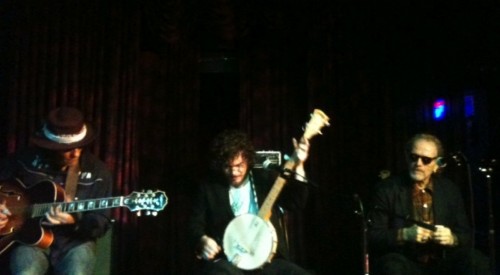 The taxidermy game was as fun (and visceral) as it sounds. When puberty hit, I became OBSESSED with fishing – and the art of fish mounts as a result. One thing lead to another and after literally hundreds of hours of taxidermy instructional videos on VHS (I highly recommend the Bob Elzner series), I began to do “extremely amateur” taxidermy jobs on millpond pickerel and roadkill oppsums.

In terms of stories, my favorite is when I was working for moonlighting for a taxidermist and working as a residential instructor at a boarding school in Winooski, VT. My boss had me drive out to the Northeast Kingdom to pick up a bobcat from some old timer – the thing was in one of those cheap styrofoam coolers – and it did NOT look good. I brought it back to my apartment in the dorm, and had to find a way to keep it cold, while simultaneously hiding it from my students.

It would not fit in the fridge, so I literally had to keep the bobcat container in my tub, and fill it with snow (which was rapidly melting this time of year) every three hours. After all the work, when my boss finally saw the critter, he realized there was WAY beyond mounting – estimating that it had been dead for at least three months. My guess is that the geezer found the bobcat dead in the woods as the snow started to melt that season.

Auuuugh rotting bobcat in the bathtub! My one (and so far only) encounter with a taxidermied bobcat happened when I was working for a newspaper. I was the real estate reporter and one of the houses I was covering had a stuffed bobcat on the sideboard in the dining room. You know, just chilling. It was too big for me to move so I just had to include it in the pictures.

Anyway! Moving on! You’re releasing an LP On Dec. 20th called TAKE THAT! (YOU MUTATED SON OF A BITCH), what’s that about?

It is lot of banjo and breakbeats based mash-ups and reworkings Hollywood theme songs, mixed up with some ancient Lautari melodies and whatnot.

What is an ancient Lautari melody?

The Lautari are a “clan” or “cast” of Romani. In my (humble) opinion these are the greatest folk musicians in the world. They act like dj’s – absorbing all the music around them (Romanian folk tunes, Byzantine liturgical chants, Turkish fantasies, Russian dirges, movie themes, etc) and spit it back out in an improvised fashion that is never played the same twice – but hard and funky enough to rock weddings and religious festivals that can go on for days – literally. 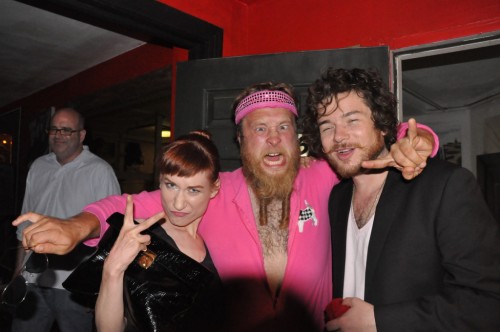 While we’re on the subject of mash-ups and reworkings, let’s talk about some of your earlier releases for a minute, starting with East Side Girls.

I was practically clapping my hands with glee on the street because I LOVE Buffalo Girls (the folk song) which, as far as I can tell is the bones it’s built on. And there’s the “round the outside” which I somewhat belatedly realized I associate primarily with hip-hop – largely thanks to Eminem borrowing from Malcolm McLaren who was borrowing from square-dance calling.

But what is Sadie D’Marquez singing in the first round of “Rebel to the core singing ??” The second time I can hear the “hallelujah” but the first time I can’t make out the words.

(Related: Thanks to Spotify, I have now heard Alvin and the Chipmunks sing Buffalo Girls. Not sure if I’m traumatized or tremendously entertained.)

Glad you like BUFFALO GALS as much as i do. Sadie’s lyrics go: a girl walks down the street / through the hills of the new world / the last stop of the western world / true queen of the angel town scene / where harmony’s language / and poetry’s currency / we’ll she’s an east side girl and she’s been hounded by them / gold diggers and folk singers / dogs in the limelight / so far away from their flatland homes / she’s got that high ground, that root sound, that serpentine moonshine / she’s got feminine divinity / rebel to the core, singing allahu akbar (changes to “hallelujah” the second time through).

And 10,000 Wild Miles Back to Tennessee – is that a reworking or an original? Which pilgrimage is it about?

10,000 WILD MILES comes from a defunct bathroom turned storage closet in the basement of the Hancock County Public Library in Sneedville, TN. The high elevation hamlet seemed like a rich folk vein for two reasons: 1) it’s the hometown of Jimmy Martin – my favorite bluegrass musician, and 2) the epicenter of Melungeon culture. The lyrics come from a poetic letter home by a local boy (identified only as William S.) who had gone off to fight the Kaiser as a doughboy. The letter was posted from Saintes-Maries-de-La-Mer in France, and addressed to: Collins’ Farm, Sneedville. I can only hazard a guess as to who the recipient was.

The last set of songs you put out were Moonshiner and Barbarosa. What’s the story behind them?

MOONSHINER comes from the Smoky Mountain archiving expedition of late October, 2008, when I travelled to outer reaches of Thompkins Knob, NC in search of Caleb Isquith – a promising flat-picker and writer in the Asheville scene, who had fallen into obscurity after his institutionalization for paranoid schizophrenia.

This reworking of a traditional gospel hymn is reported to be the last song Caleb wrote, days before bleeding to death in confinement during a self-castration attempt. The extreme measure was an attempt, in Caleb’s own words, to “stop the changing.” The musician’s aunt and occasional dulicimer accompanist, Beth Ahearn, allowed me access to the original lyric sheet and notations to MOONSHINER. To my knowledge, no other recordings of this song exist.

The B-side, BARBAROSA, is an ancient Traveller tune picked up during bonfire sessions amongst the encampments of grape pickers in the Barossa Valley.

And finally, what do you have planned for 2012?

Expect multiple full-length recordings from Blackwater Jukebox in 2012. I’m hitting the ground running, recording original songs and radical reworkings of traditionals. What’s more, 2012 is going to see a heap of instructional materials – banjo, music/songwriting theory, and production tutorials, field recording primers, along with video journals of amazing, yet unknown LA master musicians, and of course, Blackwater Jukebox videos. In many ways, the material released in 2011 was just a prelude for what’s coming next.