Home » feature » Pete David & the Payroll Union: Ghosts Came By and They Told Us to Go

Pete David & the Payroll Union: Ghosts Came By and They Told Us to Go 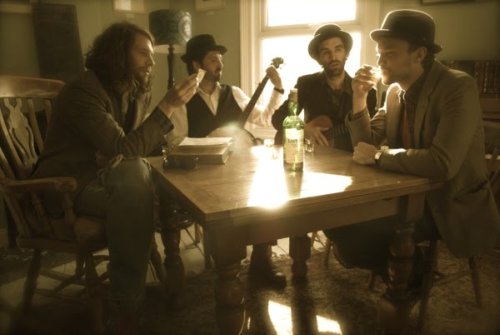 Recently, while listening to a band whose genre was listed as “Americana” but who were not from any of the Americas, let alone the United States, I likened Americana music in the ’10s to Irish music in the ’90s – a genre named for a country, rapidly filling with non-native practitioners.

But that phenomenon is not necessarily a bad thing. Take Exhibit A: Pete David & the Payroll Union. Based in Sheffield, England, the group was formed by a couple of young Brits (vocalist/guitarist/harmonica player David and banjo player Joseph Field) who held an acute interest in the traditional music of the U.S. This makes a sort of sense since lines drawn from early American music (string bands, drum and fife bands) often lead back to the British Isles.

The lyrics of Pete David & the Payroll Union’s debut EP Underfed and Underpaid make this even more of a musical Möbius strip as David and company sing stories set during the French and Indian War, the Civil War, the Salem Witch Trials, etc. They even have the visage of America’s 7th president Andrew Jackson gracing their website. Not for the first time, the Brits have beat us at our own game.

Whatever, it’s probably just prolonged jealousy over that whole Revolutionary War thing. You’ll forgive them once you hear the music. The album begins with the attention-grabbing “St. Lawrence River”, in which a company of soldiers opine, in earthy harmony, that they will “die on a muddy river bed” while Field picks beautifully on his banjo and drummer Ben President urges your feet to stomp along. Later on, in “Abigail”, David croons over a slowly-strummed guitar before the song opens up with the full band into a romantic cry of longing. The album ends with “There’s a Light”, probably the most traditional-sounding song on the album with Paul Heath’s freight train bassline and Field’s banjo strumming.

Two of my favorite tracks are “The Sacrifice” with its Nick Cave-like bravado and the appropriately-haunting “Ghosts”.

Pete David & the Payroll Union have a string of gigs at home in Sheffield, later branching out to Glossop, Wales and York (check their website for details). They’re looking to work up a U.S. tour in the future, but until then, check out their lovely website and download or order Underfed and Underpaid from their Bandcamp site.