Home » feature » Hell and Half of Georgia: Men Destined to Hang Cain’t Drown

Hell and Half of Georgia: Men Destined to Hang Cain’t Drown 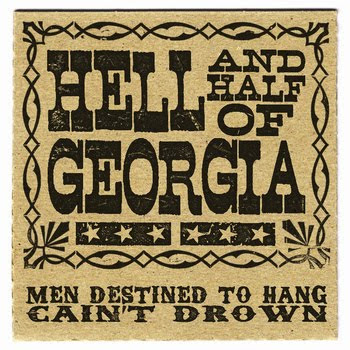 Then, in a virtual ambush, he dropped a spankin’ new EP on us yesterday.

“first recordings with th full band,” Sean told us. “put down basic tracks in one day, then th Capt. fucked up his back pullin up an anchor, got laid out perty bad. pieced it together hour by hour from there. what shoulda took 3days lasted 3month. it’s been a slow summer…”

While Men Destined to Hang Cain’t Drown was a more democratically-produced effort for HaHog, it finds their sound more cohesive. A shiny thread of honky tonk glitters brightly throughout, aided greatly by some beautiful lap steel. And don’t forget ol’ Captain Ed Brady.

“th Capt. has become absolutely indispensable, this band could not continue without him,” Sean notes. “he’s th rugged free-spirit in th band, sometimes we gotta reign him in. he is in his 60s and has more excitement and passion for this band than anyone else. “

We’re happy to have the new batch of songs and offer you a couple of our favorites.

Hell and Half of Georgia – I Got a Girl

Hell and Half of Georgia – In the Way

Go download the whole shebang yourself right now because the HaHoG boys are giving it away for free again. Do it, people.

Tagged  Hell and Half of Georgia, link, mp3.
Bookmark the permalink.
Logging In...