Home » uncategorized » Ponderous Wank: “Remember the days when Grandpa would take us upstate to play in the country.”

Ponderous Wank: “Remember the days when Grandpa would take us upstate to play in the country.” 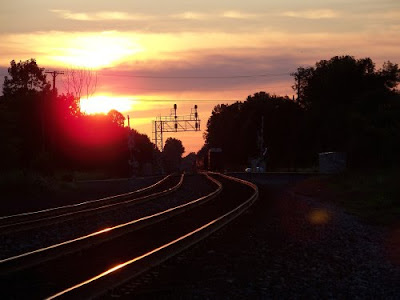 Adding to the lists of reasons why I love the Felice Brothers: It seems there upbringing was not terribly different from mine, and I can feel that familiarity in their words and actions. Just now, I was listening to “The Country is Gone” from their album Tonight at the Arizona, and I heard sounds that made tears catch in my throat. It was the distant call of a Blue Jay and the almost-subliminal rise and fall of the sound of Cicadas. Just in the background, just like the way I heard it as I went about my daily life in the country.

It’s an interesting thing… I spent so much of my youth just waiting for the time when I could get away from the countryside, but now that I am in the city (or near enough to it), I realize how the country left its mark on me, in a not-unpleasant way. I have always loved the lights and sounds and motion and tall buildings of the city, and I often feel filled with an electric energy when I’m surrounded by it, but it’s those sights and sounds and smells of the country that can move me to tears now and give me some peace at times.

As I was writing that last line, a train started passing on the tracks near my house. This is one of my most cherished sounds, a sound that I have been able to take with me from the country to the city, a sound that comforts me even as it might drown out whatever else it is I am listening to. The safest and calmest I ever feel is when I awake in the middle of a summer night and hear a freight train passing nearby.