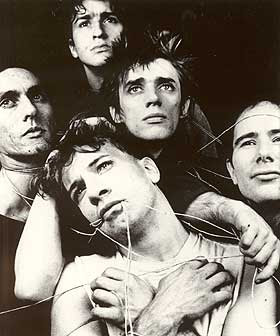 Apparently, it’s time for my generation to feel old. Anniversary shows? For my bands? That’s something that’s only supposed to happen to my parents’ bands. Paul Revere and the Raiders have anniversaries. Einstürzende Neubauten do not have anniversaries.

But I suppose I can give a little leeway to a band who have been around for three decades and have made music of everything from warehouse noise to aching ballads. On November 9, EN will be releasing the fourth in their series of “archival” albums, Strategies Against Architecture, which covers material from 2002 to present, including selections from the Musterhaus series that was available exclusively through the band’s website.

In addition, EN will be kicking off a special tour in the Netherlands on October 14 (and hitting American shores on December 1). Each city on the tour will get two shows: the first night will be a full-on Neubauten concert, while the second night will be a three-part program with music, film and other typically experimental media.